The other week I was totally uninspired for what to make in the hour or so I had spare. I rootled around in the 'shop bought' Christmas cards box and whilst doing so my eye was caught by one card in particular and also some card stock lying to the right of me, waiting to be put away.  Suddenly the beginnings of a card began to appear in my minds eye: 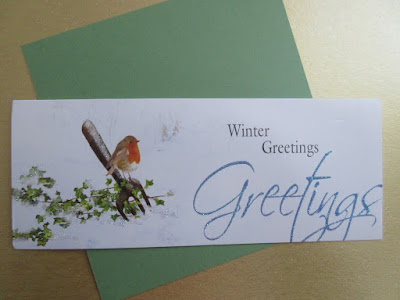 There's an A4 piece of matt gold card stock, a snippet of SU 'Wild Wasabi' left over from a previous card I'd finished making - and a long slim Christmas card.

And this was the end result - shame the fact that greens are such a perfect match isn't obvious, I hate it when the camera tells fibs, SU's'Wild Wasabi' is brighter and doesn't have such a blue tinge about it: 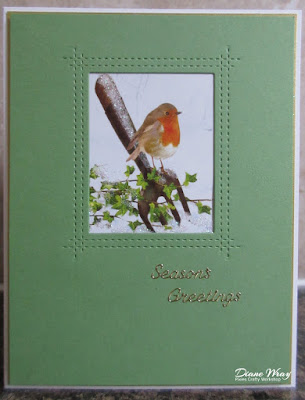 - added the image panel to the card blank, having backed it with white fun foam just to lift it a bit - using Collall All Purpose glue

Oh I do so love that Peek-a-boo Window die. I've also seen it used for shaker cards around blogland - it's just perfect for that of course!