And it's a new fortnight in the Snippets Playground - I've been saying that Spring is around the corner and just the other night one of the hedgies tottered to the feeding station for a quick drink and something to eat!  It's been back a few times since as well, in fact we think there might already be more than one of the little critters :)

Thank you so much to everyone who came to play this past fortnight as there were some many fabulous entries!

This is my snippets card for the fortnight, and I confess to using two 'almost card sized' snippets: 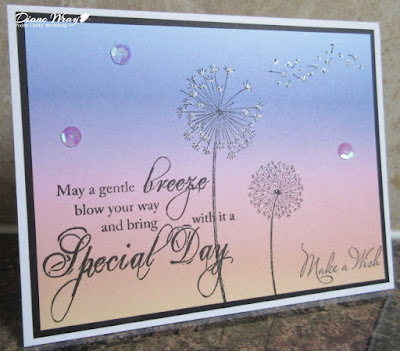 - snippet of black card stock for the 'frame', glued to the card front using Collall All Purpose glue

- a snippet of 'rainbow' card stock which I used for the background, it also saved me having to use duster brushes and inks

- using the Misti, I first stamped the dandelions and 'Make a Wish' using Memento 'Tuxedo Black' ink and the Inkylicious 'Make a Wish' stamp set

- then I trimmed the piece of card to size before stamping the Inkylicious 'Gentle Breeze' sentiment, again using Memento 'Tuxedo Black' ink

- glued the image panel on top of the black panel, using the same glue as before

There's a lovely tale that the dandelion is the flower of the military child (I was one - ha, a military child not a dandelion!!) and one piece of prose about it goes like this:

"The official flower of the military child is the dandelion. Why? The plant puts down roots almost anywhere, and it's almost impossible to destroy. It's an unpretentious plant, yet good looking. It's a survivor in a broad range of climates. Military children bloom everywhere the winds carry them. They are hardy and upright. Their roots are strong, cultivated deeply in the culture of the military, planted swiftly and surely. They're ready to fly in the breezes that take them to new adventures, new lands, and new friends."

I would have left the 'good looking' part out - but a lot of the rest rings so true!

This coming fortnight's prize is made up of stamps, (A) a couple are the same as the ones I used for my card (Inkylicious 'Make a Wish' and 'Gentle Breeze'). Plus, (B) a Lavinia 'Flower Fairy' stamp that I had originally intended to use with the dandelions - we've had this same stamp as a prize twice before in the Playground BTW - always very popular. And (C) we also have a lovely traditional English Summer cricket scene stamp, kindly donated by Lynn (Linby) - made by Crafthouse Press and called 'K007 Cricket'. 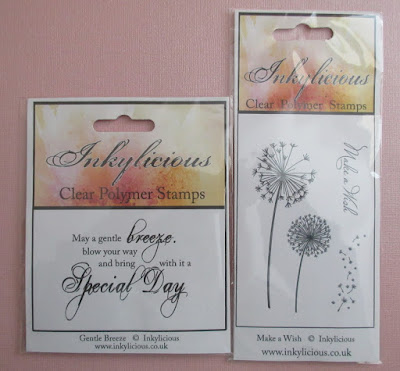 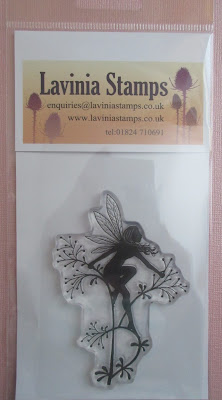 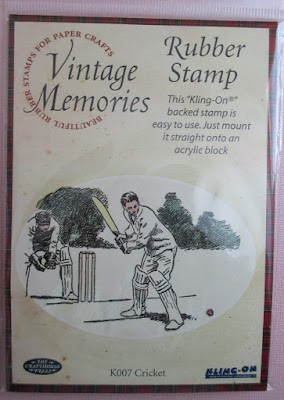 I will split the prize three ways if necessary, the two Inkylicious stamps (A) will stay as one part though (I think the verse would be lovely stamped inside a card with the dandelions on the outside). The Lavinia 'Flower Fairy' stamp (B) can stand alone - although it would work so well with the dandelion and the sentiment sets. And the cricket stamp (C) would be the other part. But, as always - all four stamps are one whole bundle if you wish to play for all of them together.

The Snippets Challenge will run for two weeks from now on and the Playground gates will close at 11am UK time on Saturday 1st April. The gates will open again at midnight UK time on the same day.

It's still a maximum of ONE entry and please say in a comment if you wish to play and be a possible winner of the prize. The prize is all stamps together as a single prize, unless you really do only want to try for a 'split' as I explained above - in which case I'd do further draws for the other items. Please also link back to the Playground in your blog post to be eligible for the draw.

Remember, if you link into the Playground and don't say clearly that you're wanting to be in the draw then you will be bypassed if your name comes out of Mr Linky. I'm sure you all know I ask for a positive yes just in case you're playing only for fun. Thanks!

Be sure to call back next week to see the winner of last fortnight's prize  plus my picks from the past two weeks as well! And to see who our next Guest Designer is!

Look forward to seeing what you come up with this fortnight - more clever ideas for snippets as well as 'anything you choose' - what could be simpler?

Love from Parsnip and me,