It's halfway (once again) through the fortnightly challenge in the Snippets Playground and time for our Guest Designer, some 'picks' of the fortnight and the prize draw.

First of all, our Guest Designer is a lady who frequently makes me laugh, besides being very talented - it's April of Paper Lily Leaf: 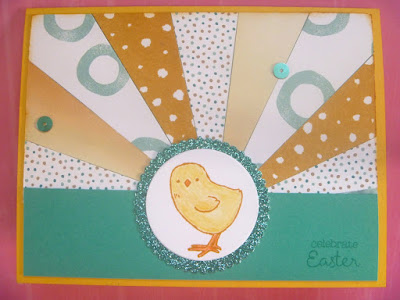 Isn't this a darling Easter card? And, April used the fabulous sunburst technique that is so perfect for using up snippets of both plain and patterned paper.

April sent me the following details about how she made the card:

"My Easter card uses snippets from a Designer Series Paper Stack called Serene Scenery. I combined the sunburst design with Bermuda Bay and Daffodil Delight cardstock. The cute little chick can be found in the Little Cuties stamp set. He was stamped in Delightful Dijon and then coloured in with SU watercolour pencils. To add a bit of bling I have included a snippet of Bermuda Bay Glimmer Paper and a couple of sequins. I hope you like it – I think he looks a cheeky little chap!"

For loads more information (as well as a link to a site showing how to do this brilliant technique) do hop over to April's blog. A comment to say you called, as well perhaps joining April's followers, would be great as well girls - pretty please from Parsnip :)

April's a huge fan of Stampin' Up as well as being a Demo for them and I've found plenty of inspiration over on her blog. Bless, she was too shy to let me have a photo of herself - but here's a great photo from her blog - taken after a certain cat named Spot had been doing acrobatics from the curtains:) 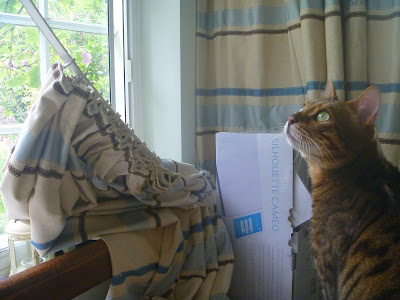 It's as if he's saying 'Who, me?' and, according to April, with not a shred of remorse - just the sense of a job well done! Snigger.

It's just over four years since April began her blog and she's quite canny about sticking to crafting posts so it's quite hard to dig around and expand much on the basic stuff I know about her. One incident, which totally cracked me up at the time was when April managed to step onto some gold embossing paste and then trot around the bathroom and up and down stairs leaving nice little 'splots' from the sole of her slipper. Sound just like a trick I'd pull to be honest!

Thank you April for being such a sport and agreeing to be Guest Designer this time round!

Remember girls, you can always let me know if you would like to be a Guest Designer - I have a list and would be delighted to add your name.

So, let's move onto my picks from this past fortnight and first we have a Gold Star pick! 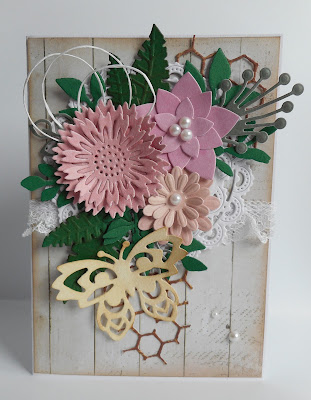 I chose this card, made by Chantal, as it's a perfect reminder of how a selection of smallish snippets can be used to made a truly fabulous bouquet of flowers and foliage. As Darnell commented, it's beautiful enough to be framed. Just take a look through your 'flora' dies girls and I bet you'll be amazed at what you can produce just by some clever combining of dies and snippets.

I hope you'll take the 'Gold Star Badge' from the sidebar Chantal - to display on your own blog.

And, here are two more picks, it gets more difficult to choose as I keep saying: 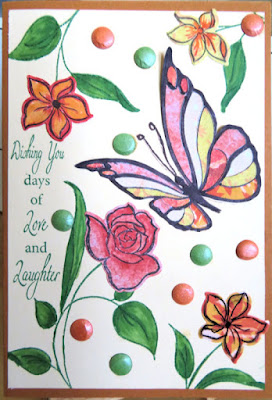 I chose this card, made by Kate, for all the fabulous paper piecing. Brilliant way to use up snippets and what I especially loved - apart from the wonderful design of course - is that Kate actually stamped each segment of the butterfly's wings onto different coloured snippets of paper. What a labour of love - and what a result! 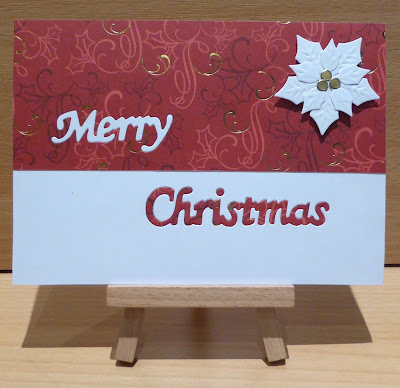 This card was brought to share by Liz and I've picked it partly because the design is just lovely - but also as a 'heads up' (in my humble opinion at least) to what is a great alternative to using, and shelling out quite a bit of money on, the Memory Box 'Grand' message dies such as this one I use quite often: 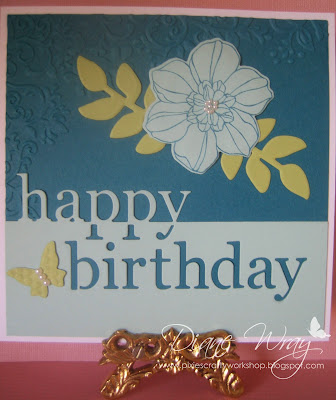 Can you see the similarities with the actual sentiment? I'm certainly not suggesting that the Memory Box 'Grand' message dies aren't absolutely fabulous, I have a few of them myself - just pointing out that you can achieve some very similar 'positive and negative' effects by using 'normal' word dies imaginatively.

That's my three picks and once again I focused very much on ingenious ways to use snippets - which might inspire you.

We had 75 Playmates joining in this past fortnight (squeal!) - with three new little friends joining us:
Welcome girls! Hope you came back and play with us again :)

Kath B
Well done Kath! Can you please drop me an email with your address in and I'll post your prize off as soon as possible! My email address is on the right hand side bar.

Our local village shop/tiny Post Office is open again so I should be quicker posting this prize. It's quite sad in lots of ways though as I popped in there during the week just gone and now that the premises have been extended and refurbished it's lost all the quaintness I loved it for. Sure it's very smart, open, amazingly spacious, bright, huge variety of stock and so on - but the heart and soul has been ripped out with all the old fittings. I think it had to be done of course to keep up with the times (and probably 'Elf an' Safety as well)  but I'm an old fashioned gal at heart, sigh :(

See you on the swings! The weather has perked up a bit and Thursday in particular was glorious in the Playground - coats were thrown off and sunglasses were donned. Mind you, I still haven't seen anyone wandering round in shorts and skimpy tops - yet! We're fully expecting Spike the hedgehog and family to put in an appearance any time now!

Love from the little white peril, who is extra happy that April is Guest Designer this week ( I suspect something might be going on between those two!) - and of course from me too