It's a great theme over at Less is more this week - 'Use A Frame'.

Had a thought right away about a card design and this was the result: 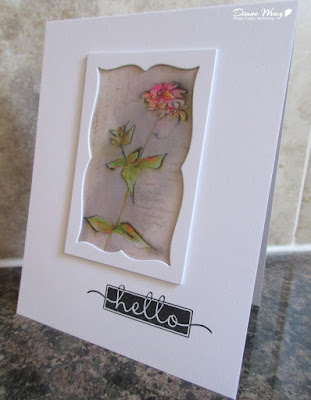 - glued the two matching frames together, back to back, for dimension

- glued the frame on top of the Stickeroo flower image

- then, before adding the image to the card, I used the Misti to line up the image and a sentiment as I wanted them

- stamped the sentiment using Memento 'Tuxedo Black' ink and a stamp from the Hero Arts 'Love Life' sentiments set. This is the replacement set for the one I was whining over the other week when a favourite sentiment went kaput - took a lot of tracking down but worth all the searching!

- finally, glued the framed image onto the card front and called it done

I do love the set of frames you get from this die, and it's really worth the effort of cutting a second for added dimension too.