Tell me what you see on my snippets card for this week - yup, another Ryn Tanaka stamp, this one is 'Raindrops': 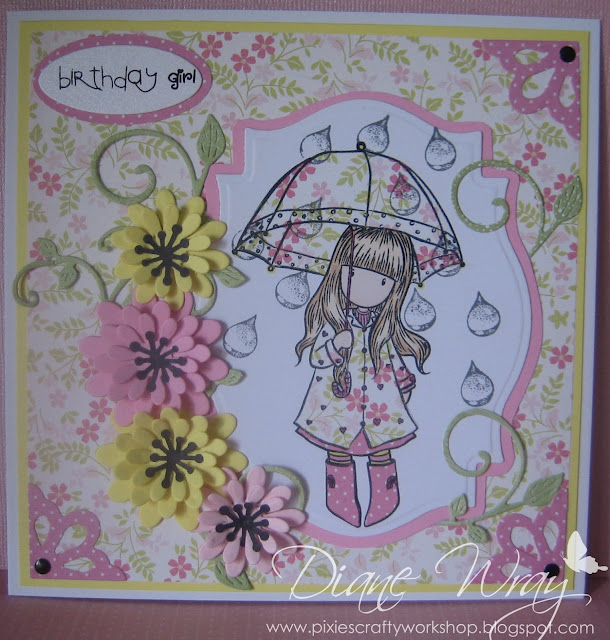 - snippets of pink and lemon card from the snippets folder, snippets of patterned paper (flowered and spotted) plus a 6" square whole sheet of flowered paper for the background

- the image is a Gorjuss clear stamp from a set called called 'Puddles of Love', coloured with Pro Markers. I've had it unused for absolutely ages! Then I paper pieced the umbrella, mackintosh and little wellies - oh, and the little piece of her dress peeking from underneath the mackintosh, die cut the image and popped it onto a backing of pink card before stamping some raindrops with Ryn's 'Raindrops' stamp. I know, the raindrops are quite big compared to her - but she's just a little Gorjuss girl :),

- flowers were die cut from teeny tiny snippets using Joy!'s 'Flowers set - 6002.0024', two or three layers depending on the flower size, which were then flicked up and the centre stamen added. That was punched using Floral Punch Craft Leone Em's 'Small Stamen II punch'. It's a quite small and detailed punch so I just coloured some paper using a black Pro Marker and after it had dried properly the stamens punched out fine - it won't work on card though, ask me how I know :)

The picks for this week were as difficult as ever, I hope you like my choices and the reasons why: 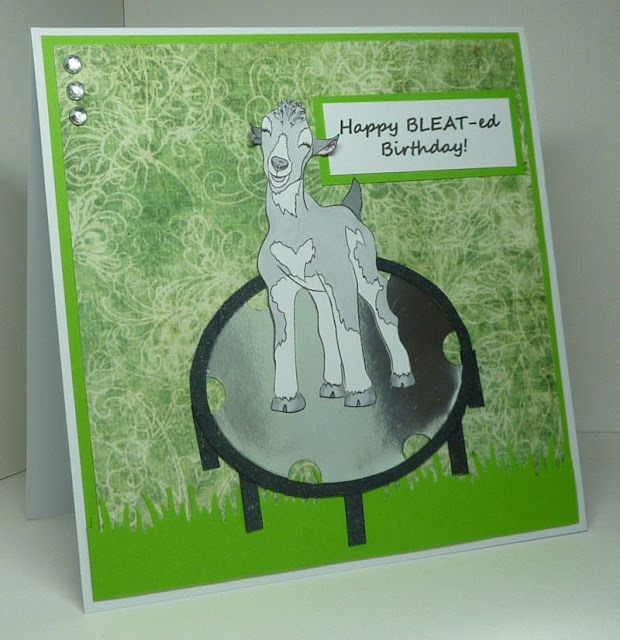 This card, made by Kim, just HAD to be included - serious attack of the giggles here when I spotted it! After a week of petitions about 'saving the tree house' because I'd proposed that the trampoline would have to go there it seems so appropriate. Love the goat trying it out - and the tree house is quite safe, I filled in the duck pond and put the trampoline there instead :) 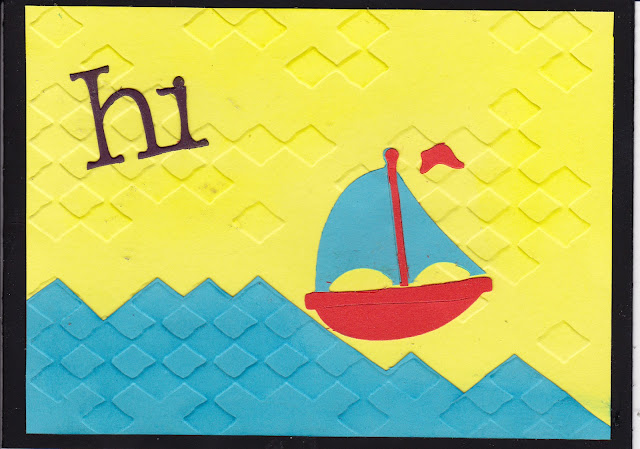 I love this card, made by Glennis - bright, eye catching and such a great way to use up snippets. It really does sum up Summer perfectly. 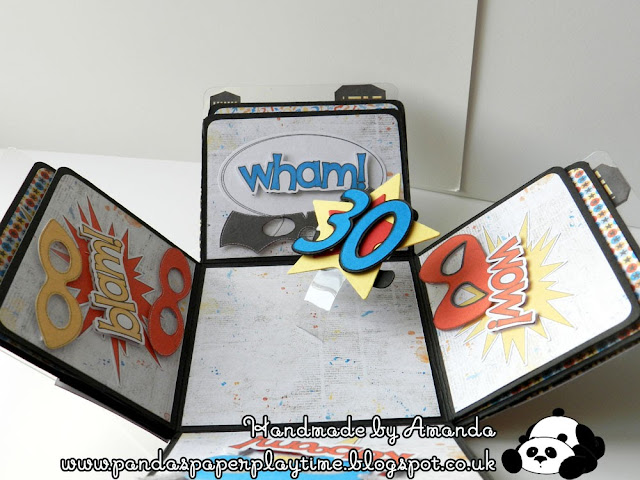 Amanda brought this brilliant 'exploding box' to show - so much work (and snippets!) must have gone into it, terrific idea and so well thought out. 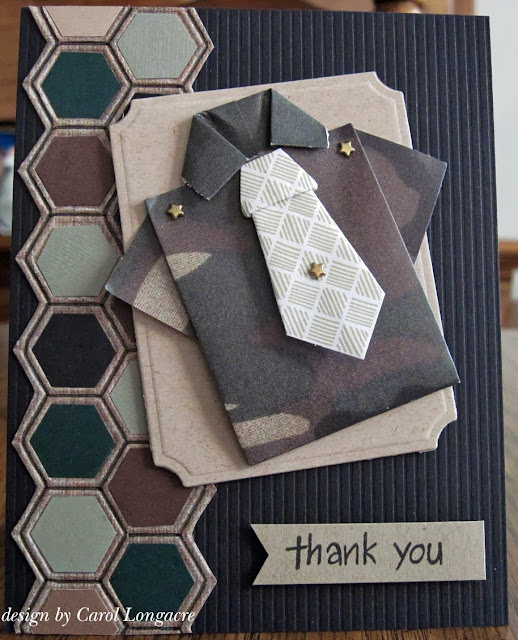 How about this then? A fabulous folded shirt, made from a single piece of paper is the perfect topper for this great card - love the background too. Our Carol hopped into the Playground waving this - so clever. I've made the little shirts in the past and it's all done with clever folding - here's a link to a YouTube tutorial if you want to try. Perfect for those oh so difficult male cards. 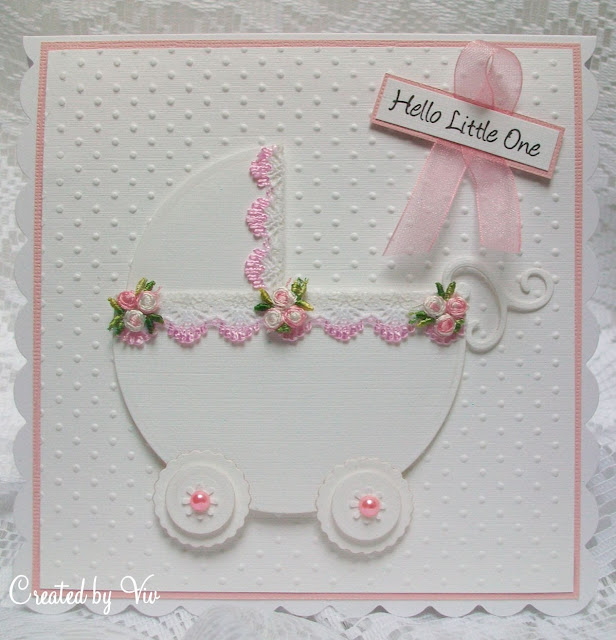 And here's a totally stunning card, made by Viv! It's a real beauty and the pram is made using die cut circles - another one to try. I love how the pink lace and little rosebuds finishes it off so well.

A big welcome to a new Playmate as well - that's Sue J of 'Olliesmam'. Be kind to Sue girls, hopping over to say 'Hi' would be nice too.

Remember, you can still go to last week's links here and have a hop around.

OK, so who won last week's prize of the Penny Black stamp 'Strawberry Jam'? Chosen by the Random Number thingy it's:

Liz
Can you please send me your snail mail address (di_wray@hotmail.com) Liz - and very well done!

So, this coming week's prize: 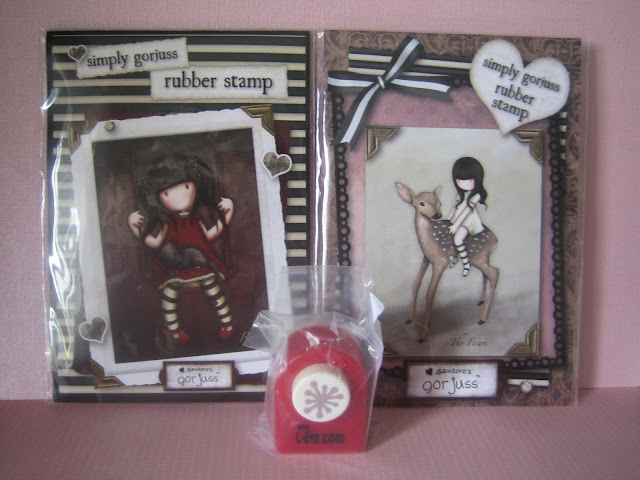 It's two Simply Gorjuss stamps, as shown plus a little stamen punch the same as the one I used on my card. Linby sent me the 'Girl on a Swing' (only been inked once) absolutely ages ago for the Playground and I've added a new stamp called 'The Fawn'. I'll be perfectly honest and say that it's the colouring of the fawn that scares me so that's why I'm giving it away, I know me limitations! But can't you see the little girl dressed in red and then the image used with a snowy background for a Christmas card?

That reminds me, many of you have been sweet enough to send prizes for the Playground, for which I do thank you very much. Please don't fret if I don't offer them straight away - they are safely tucked in the Playground toy box and listed in a notebook so they will appear for sure. But, you must never, ever, feel that you ought to send anything, the toy box is very full and there are enough prizes there to take us into 2014! If you just carry on playing and enjoying yourselves that's enough to make me happy.

But, someone else decided to send us a Playground prize - when I was ordering something for the future from the lovely Ryn Tanaka, she noticed that I hadn't ordered two of the Raindrop stamps and (bless) included one for you girls as a prize! How totally sweet is that then? 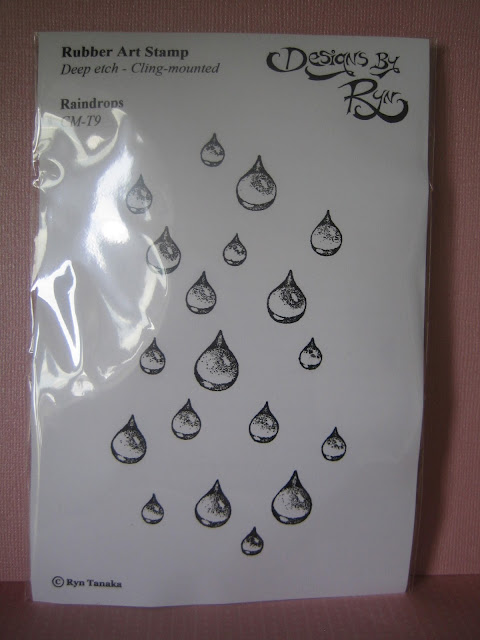 So, this is one of those two week things like last time. All you have to do to be 'in it to win it' is to make a total of THREE snippets entries over this week and next - so that might be three in one week, two one week plus one in the other, it's up to you. Of course you can still make a maximum of three entries in one week which would also count. Then, it'll be the sunhat draw and I DO only have one stamp to give away, courtesy of Ryn.

The Playground will run as usual this week with the gates closing at 11am UK time on Saturday 3rd August. Maximum of three entries and please say 'No thank you' in a comment if you wish to still play but not be a winner of this week's prize which is the Gorjuss girls stamps and the stamens punch, shown above. Mr Linky is below - do please let me know if you have any problems linking, I can sort it out for you quite quickly and am always happy to do so.

Enjoy your week and hope to see you in the Playground!