On Friday I had the urge to sit and make a bright and colourful card to brighten the day so I rootled round in the bulging snippets folder, dug out a few strips of brightly coloured card - and this is the result, my snippets card for this week: 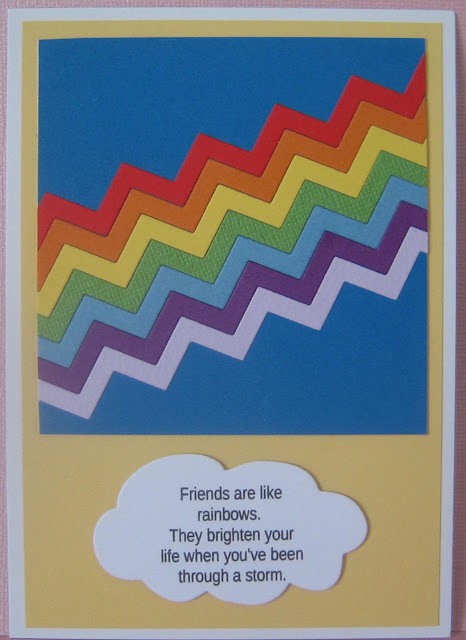 - a snippet of SU 'So Saffron' card stock

- snippets of red, orange, yellow, green, blue, indigo and violet card (ha, the violet has washed out to almost white in the photo, despite me trying it out in different lighting) - all die cut using MFT's 'Chevron Stripes' die. A first outing for it although I bought it ages ago - thought I'd better use it before chevrons go out of 'vogue' - not that I can see that happening just yet!

- sentiment was printed using the printer here and then die cut with one of MFT's 'Cloud Trio' dies. I'm sure you'll all know this trick but just in case - what I did was to cut a cloud template using some spare card and the die. The cloud template I wanted to use was placed over the sentiment where I wanted it to be and then the die itself was slotted in place, cutting side down of course, over the top to cut. I found it easier to gently slip the template away before running just the sentiment and metal die through the Cuttlebug. I know, you probably already know this trick anyhow!

I really thought the sentiment so appropriate after all the lovely comments you left this week - thank you all so much!

So, this week in the Playground - lots of lovely makes as always, and I've just picked a few to show you:

Karen P has been busy with her droplets stamp and the fish stamp she won recently - clever idea to cut the background into four! 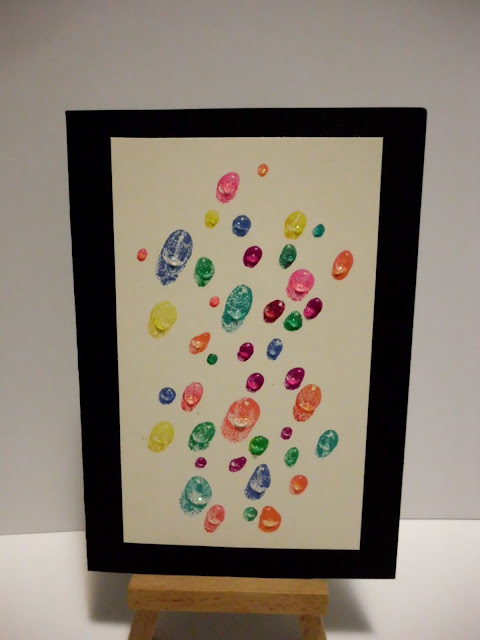 And look at this different take on using the droplets stamp - I'd never have thought of doing that Maureen! But at least we've both been thinking about rainbows :) 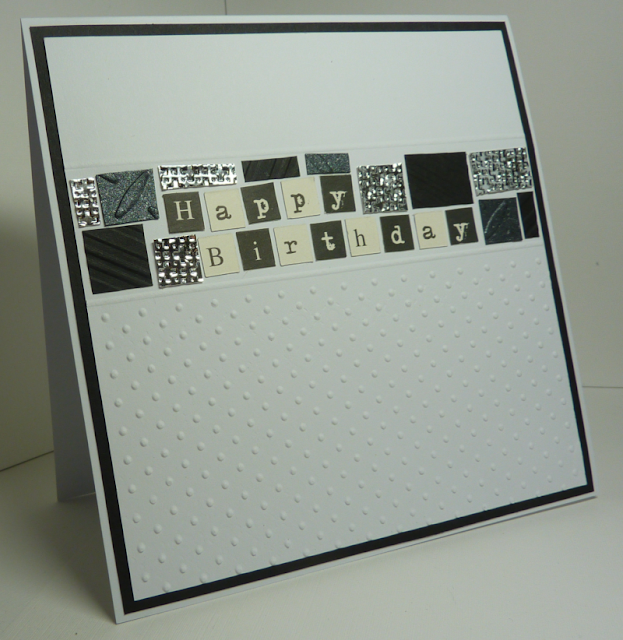 Brilliant use of little snippets here by Kimbo - a perfect example of 'random placing' looking just right. If I did that it would look as if I'd just thrown stuff onto a card :( 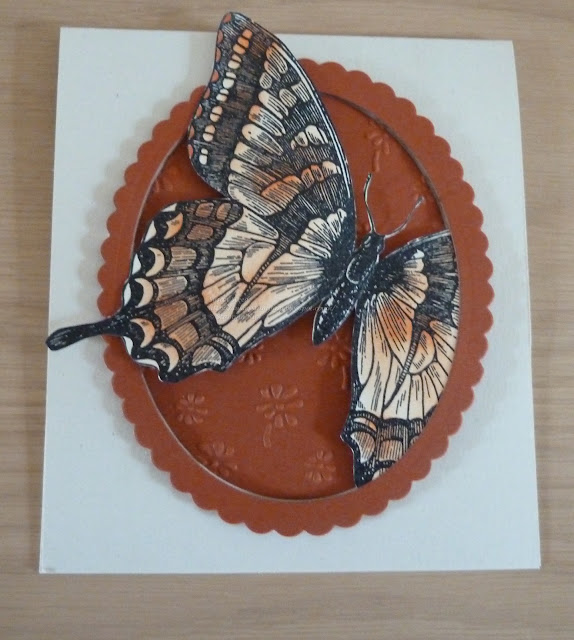 Sue rescued a smudged image and came up with this gorgeous card - really clever idea too. 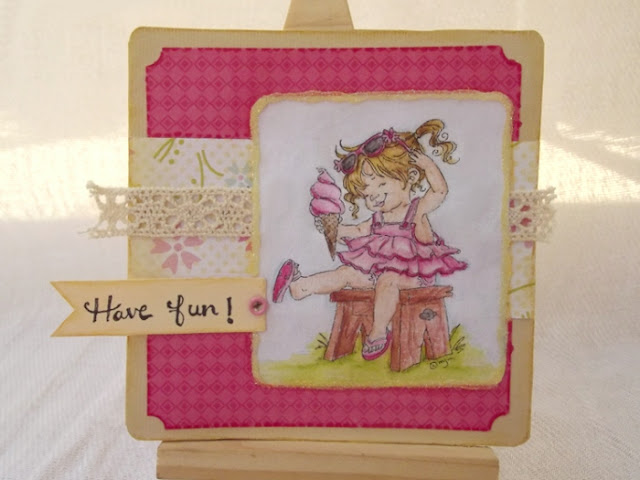 And last, but not least, we have a new Playmate - welcome Roudi, your card is just perfect for the Playground but don't let the naughty girls lead you astray :) This image really does conjure up images of little scallywags taking a break whilst plotting their next bit of mischief!

I'm stopping there, although there are more terrific droplets cards and all sorts of great snippets ideas if you peek at last week's entries!

And last week's prize of eight sheets of Penny Black Stickeroos was won by:

Wahoo - great choice Mr Random! Hazel is one of our most prolific (today's big word) card makers, she runs two great Christmas challenges and makes loads of cards to raise funds for her local church. Plus, she rarely misses a week in the Playground so after 24 weeks of me giving away prizes - it's Hazel's name that finally came out. I'm sure the lovely Stickeroos will be put to great use. Can you please drop me an email with your address Hazel - di_wray@hotmail.com. Thanks, and well done!

This coming week's prize girls - you might not be at all surprised to learn that it's sets of the dies I used today - 'Chevron Stripes' and 'Cloud Trio' by MFT: 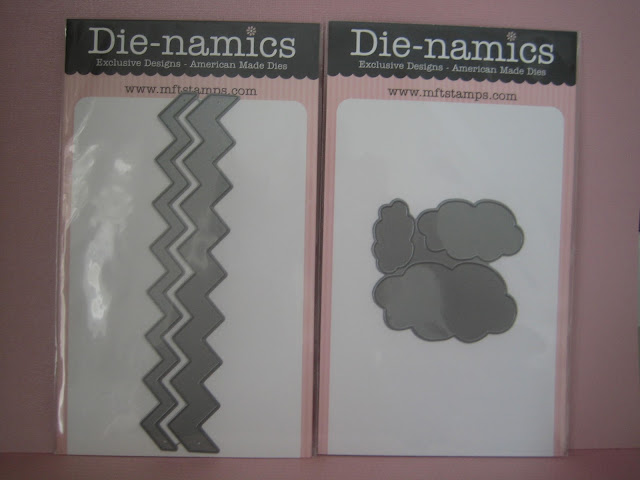 Both sets will make up this coming week's prize - first person drawn by Mr Random who hasn't said 'no thank you' as usual.

PLUS, I posted yesterday here about an extra prize - three of them in fact. To read more just go to the link, but they really are the closest thing I think you'll find to Couture Creations' 'Tied Together' embossing folder. Made by Crafts-Too and called 'Lattice': 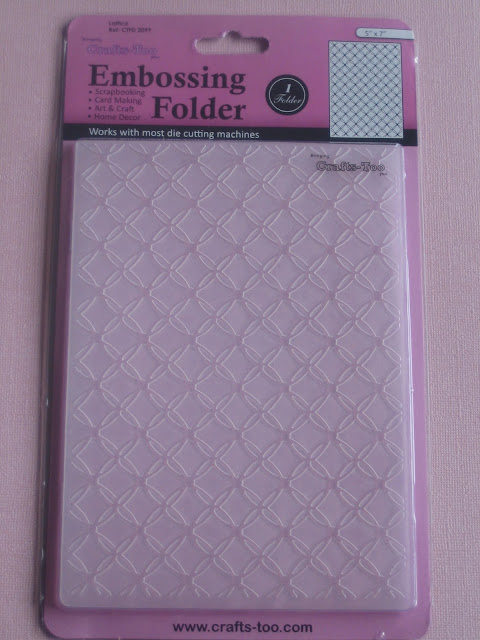 All you have to do to be 'in it to win it' is to make a total of THREE snippets entries over this week and next - so that might be three in one week, two one week plus one in the other, it's up to you. Of course you can still make a maximum of three entries in one week which would also count. Then, it'll be the sunhat draw. I DO only have three of these folders to give away - was lucky to get those if you read my previous post - so it won't be like the Ryn stamp giveaway where I had more up my sleeve :)

Talking of Ryn, guess what she only went and did? I do have a different water stamp of hers to give away soon - and the little sweetie noticed that I'd only ordered another one for myself of yet a different water stamp so she added an extra one of those in as a prize from her. How sweet is that then?! Watch this space - there will be two Ryn stamps coming up over the coming weeks!

The Playground will run as usual this week with the gates closing at noon UK time on Saturday 6th July. Maximum of three entries and please say 'No thank you' in a comment if you wish to still play but not be a winner of this week's prize, the two sets of MFT dies. And of course you can start building up your total of three entries over the next two weeks for the 'Lattice' embossing folder. Mr Linky is below - have fun!

PS I've added a Bloglovin' button to the sidebar - I use my dashboard to follow folk so at least that ought to be fine still but just in case any of you use Google Reader the button is there! Belt, braces and double knicker elastic, that's me!