Playing with THAT landscape die again and making snow globes

The other day I posted a card using a Memory Box 'Modern Landscape' die and one comment really set me thinking. ScrappyMo said '....I saw this die on pinterest with your blue sparkly background card forming the sky and just a bit of the die with the house...all set inside a snow globe die'. Sooooo, I looked for the card on pinterest and couldn't find it but I did stumble across Memory Box Snow globe dies for sale.

Pardon me if you already have a snow globe die but it struck me that the dies were not much more than a circle plus a basic stand for the globe - and I could save some pennies so this is my take on a snow globe: 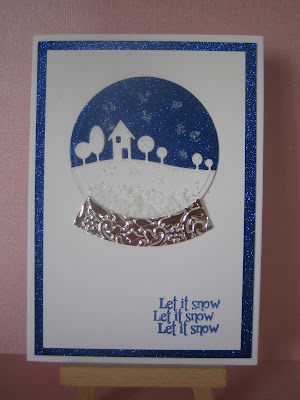 And this is how I did it:

First I selected one round die and two oval dies - they're Nesties and the oval dies are the 'next but one' in a set to give enough 'chunkiness' to the stand. Circles would be too 'rounded' - and in fact even bigger ovals would give a gentler curve. The Memory Box 'Modern Landscape Border' die is also poised to be die cut. 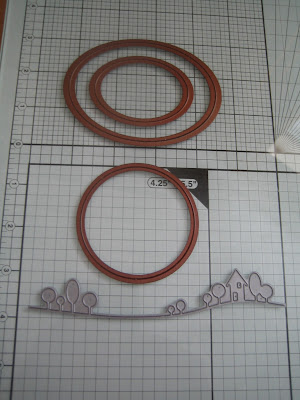 The oval dies lined up on silver mirri card, ready to cut, held in place with lo-tack tape. Snigger, and my paws reflected holding the camera! 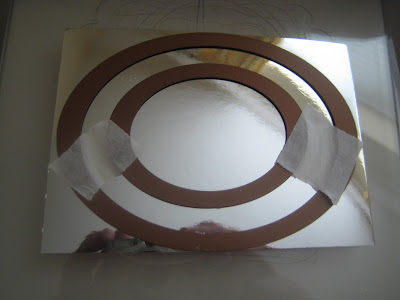 The die cut oval 'frame' was then run through my SU 'Holiday Frames' embossing folder - any folder would do just as well, I just liked the scroll effect :) 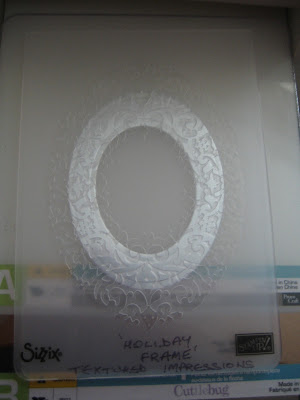 I then cut the blue sparkly circles and the sticky backed landscape pieces. Now, here's a tale against me - two in fact! Firstly, when I struggled the other day I sure hadn't been patient enough 'cos by running the landscape border die back and forth through the Cuttlebug several times I did get a brilliant cut in the end - and the sticky backing peeled off perfectly.

Then I added the white card with the landscape border already cut onto the blue circles and ran them through the Cuttlebug, carefully lining up the circular die again. IF I'd been brave enough it would have been much quicker to adhere the white landscape to the blue sparkly before going anywhere near with the circular die - but this way I got the exact positioning I wanted, and can use that for future reference. 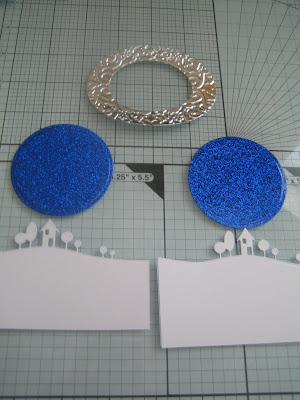 And now you see why I did two 'globes'. The silver oval will yield two stands :) 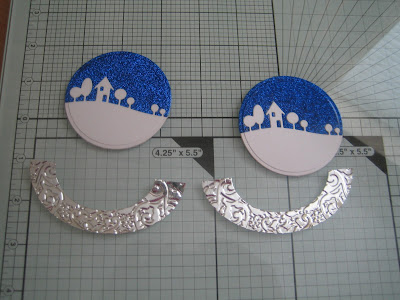 Like so - just by halving the oval and then snipping a bit from each side - probably about an inch at most but that depends on what sized globe you have of course: 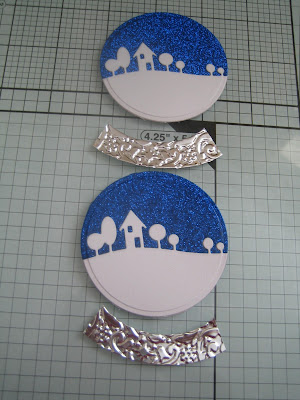 And back to how the final product turned out: - 'Frosted Lace' Ice Stickles on the trees, house roof and along the 'horizon line'

- and, 'cos a snow globe should have realistic snow, some 'Polar White' Flower Soft as well - glue'd on with Crafter's Pick 'Incredibly Tacky Glue'. It's great stuff and (shame on me) I'd forgotten I even had it until I discovered that the Pinflair glue had gone solid (from years of neglect since I had a craze using Flower Soft). It's made in the USA but is available over here.

If I'd had more dies, or more patience, then am sure the stand could be improved upon - but it's not really a million miles away from the Memory Box die set :)

Plus, imagine stamping little scenes instead - I can see some fun times ahead :)

Edit: I woke up in the middle of the night, thinking that another solution for the stand might have been staring at me from a shelf all day yesterday:

Yup, it's Stampin' Up's 'Word Window' punch. Obviously you'd have to slice part of the 'globe' off so it looked as if it's on a flat surface - but I just hopped out of bed here, ran into the craft room and held the little template from my punches swatch over the card above. It would work I'm sure - and be faster!  Wahoo - something else to try :)

Just one word Do ... Stunning!

I don't believe you could improve on this one bit! I love the embossed base and the perfectly placed scene! It's the prettiest snow globe on a card I've ever seen. Thanks for the how to. I hope to try this!

Brilliant use of that die - well done

Very clever Di, this card is so effective, love everything about it :)

You are such a crafty lady. I think you have created a great card and your snow globe can surely hang with the best of them. I really like your card. I have the MB snow globe and I'm thinking I like yours better.

I bet you could have made 3 stands if you'd cut it into thirds :-)....that is if I understand what you've done right :-)
Great effect. Love the cards.
Hugs,
A x

Wow, you are a clever lady, that looks stunning Di. Could you send me a smidge of your talent please :)

What a gorgeous card.
luv
Debby

VERY clever Di. I just might have to case it!

Who's a clever Pixie?

Love the card Di and your brilliant idea for making the snowglobe. Thanks for sharing.
Hugs
Caz x

I'm gonna leave my die in the packaging now . . . can't compete with your little beauties!

These are gorgeous! And clever use of the ovals to create the base - have to try that as I don't have the punch!
Debs x

Well done you....just need to raid your house to get your punch or oval dies as I don't have either!
Hugs
xx

I've been trying to figure out if I could make my own snowglobe for a while - THANK YOU DI! I didn't want to purchase a die just for that so will use your idea! Karen x

So beautiful,
thanks for tutorial,
hugs Tamara

Brilliant card and a brilliant idea, still loving the blue sparkle card and the die but what a saving, light bulb moment or what?

Wow! Looks great...Yours looks better than the one on Pinterest!
Maybe I should just pin yours now! Let me know it you allow that...

I think it is probably in either my Christmas Cards board or my Memory Box board...my pinterest account link is on my blog...I do have thousands pinned though so you will still have a bit of a search. Just added some new boards lately so need to do a bit of drag and drop to get the new ones in alpha order.
Good job for when the garden is finished!

Yours looks fab...I am going to try it both ways you suggested...I have the round and oval dies and I have the punch you showed...

Brilliant! Super card and great tutorial - will just have to have a go at making a globe now :) Elizabeth xx

You are a genius, Di! And I so love your enthusiasm for this hobby, hopping about in the middle of the night and capturing more genius ideas before they slipped away with the dawn. Thank you so much for sharing - another reason why we so love having you as Head of the Playground!!

Well aren't you just a die cutting genius! I'm definately pinning this so I can try it later!
Thanks for showing us how you did it :-)
Tara
x

What a beautiful card!
I've done snow globes in a similar way before, but I got a village stamp since then, which I think would look amazing in a snow globe - thanks for the inspiration!
Rosey x