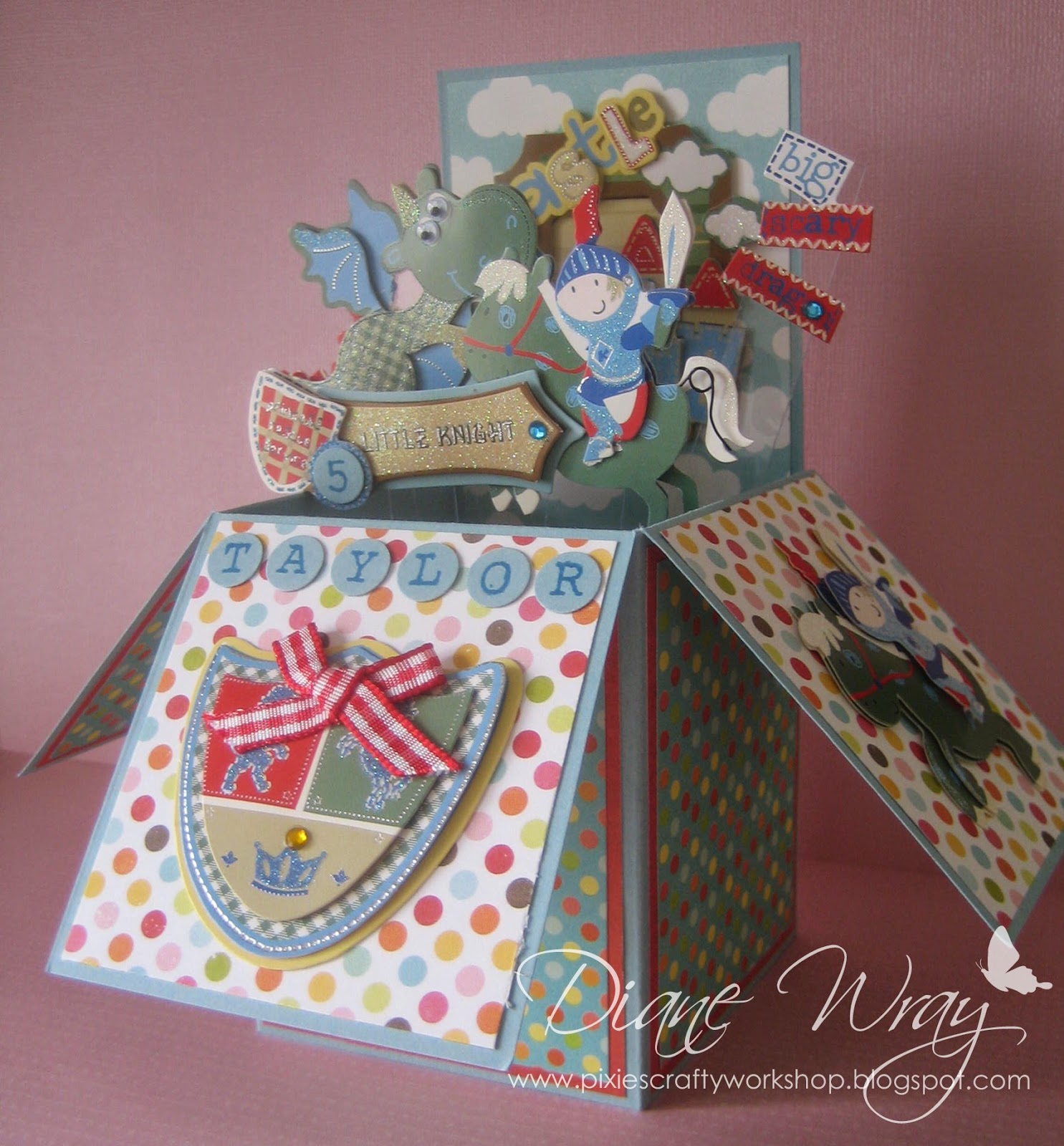 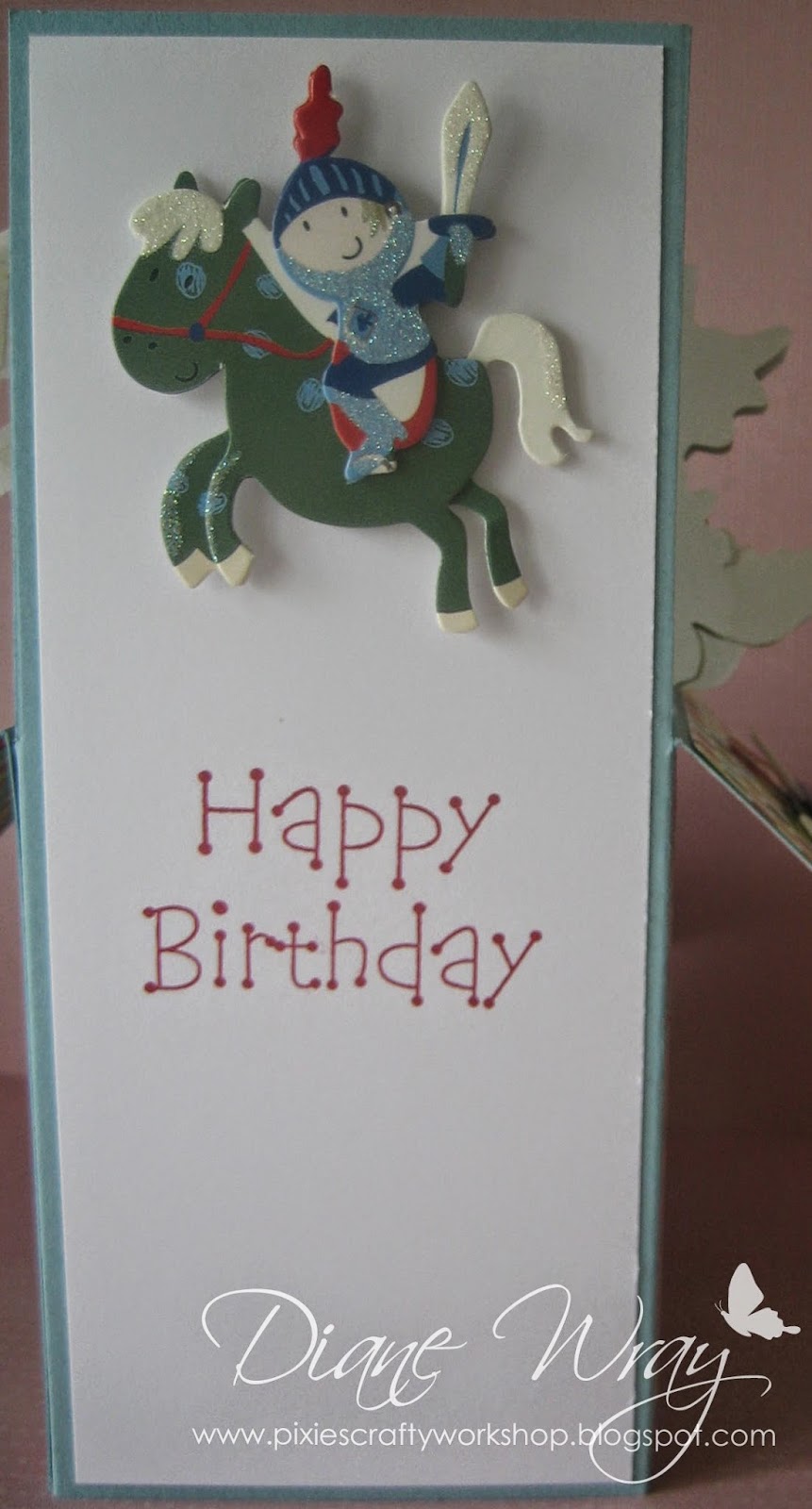 WOW!!! That is one awesome card Miss Pixie! Absolutely fabulous creation! I have shied away from them because of the measuring, scoring and cutting lol! I do love them though and this is a stunning card. Have fun on the bus Karen xx

Oh Di not usually a fan of these exploding boxes but wow what a great job you have done so very beautifully thanks for sharing, Shaz in oz.x

Wauuu!!!!
Gorgeous explosion box, you did a gorgeous present for somebody
wauuuuu
have a lovely weekend
hugs and kisses
Tamara

Fabulous card Di! Wouldn't mind a play in the party bus myself!

Wowsers Di this is AMAZING! Bet it'll be Taylor's favourite card. Do you do video tutorials as I'd love to know how this comes together. Hope the party isn't too crazy for you. Xx

Snap!! I am in the process of making one of these too! Yours is lovely

I've seen many of these cards recently but this one is wonderful and so right for a small boy - he will love it I'm sure. Enjoy the party.

Great card Di. I love these and did one with ladies at my card class. X

That is such a fun box. I'm sure he'll love it! I think they're great to make as well and so easy. The bus sounds a fantastic idea as well - wish they'd been around a few (well quite a lot) years ago when my boys were small. It would beat the scout hut any day!

Flipping 'eck, have tried to comment on this beautiful card TWICE from posh phone - don't think I've mastered the internet side of it yet!

Must say this card is FAB-U-LOUS Di. Bound to be his fave one!

Now don't you be tempted by the bus slide - remember your back!

Lovely and colourful. These pop up boxes are proving to be very popular. Now dun you go putting your back out going on that there slide. Hugs Mrs A!

Oooo very clever Miss! Your such a clever suausage - I am in awe... LOL Love this Di - amazing detail - fab! x

Wow! This has to be my favourite! So clever. You clever clogs!
Hugs
xx

What a great card! The party bus sounds like a great idea!! I'd get the ear plugs ready too.

It's raining here - so glad to get any moisture.

Hi Len,
Hugs to both of you,
Kay

This is so fun! I think it is the nicest card in a box I have ever seen!!!
The theme is perfect for a 5 year old little boy...the details are superb.
Wish I could join you both at the crop...I will be there is spirit though! lol

Oh Di this is absolutely fabulous!!! I haven't had a go at making one of these yet even though I've had the instructions for weeks LOL..he will really love this its great. Have a great weekend ..its sooooooooo miserable here hope it clears up for Wednesday and our day out with Sue P lol huggles Sue xx

Di, this is WOW!!!! How wonderful and fun. VERY creative and cute. He's going to love it for sure!
Lynn

This is truly amazing - this will blow the little mite's socks off for sure! Lynn x

Stunning, love it and so jealous.

Oh heck, forgot to say I hope you have a great day tomorrow, or today whenever you read this.

Oh this is perfick for a 5-year-old! He'll have such fun examining all the details! Wonderful work, Miss! (And that party bus sounds awesome! Am I too old to want one for my birthday?!)

Have a lovely weekend!

Oh wow, Di! How absolutely stunning! Gorgeous box card! Sorry I have been MIA for a couple of weeks. It has been a bit mad at work and I have been marking SATs papers all evening most nights.

Hi, just popped in to say ....... I love your card and the Card in a Box. Absolutely brilliant
Have a great weekend

OMGosh, Di!! Retired social worker here and cultural psychology too! Love your bus integration! What a fun day and what a gorgeous card he will have! He is going to love this!! A really fun card for a 'knight' boy!!

PS Have you seen the current 'Quick Cards Made Easy' magazine? Someone rather special stars on the 'Your Cards' page! :)

Great pop up card, I bet he loves it!
debs x