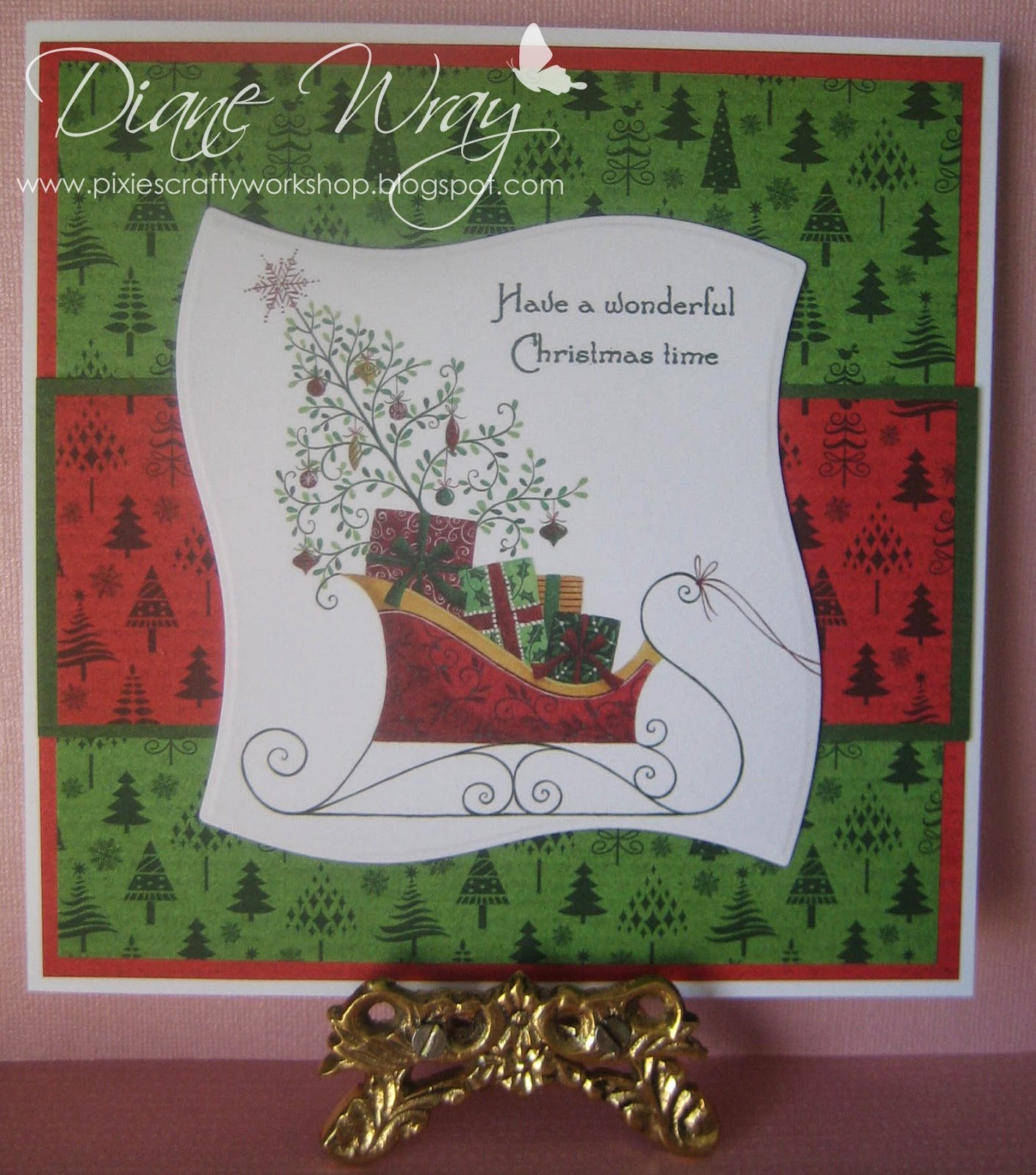 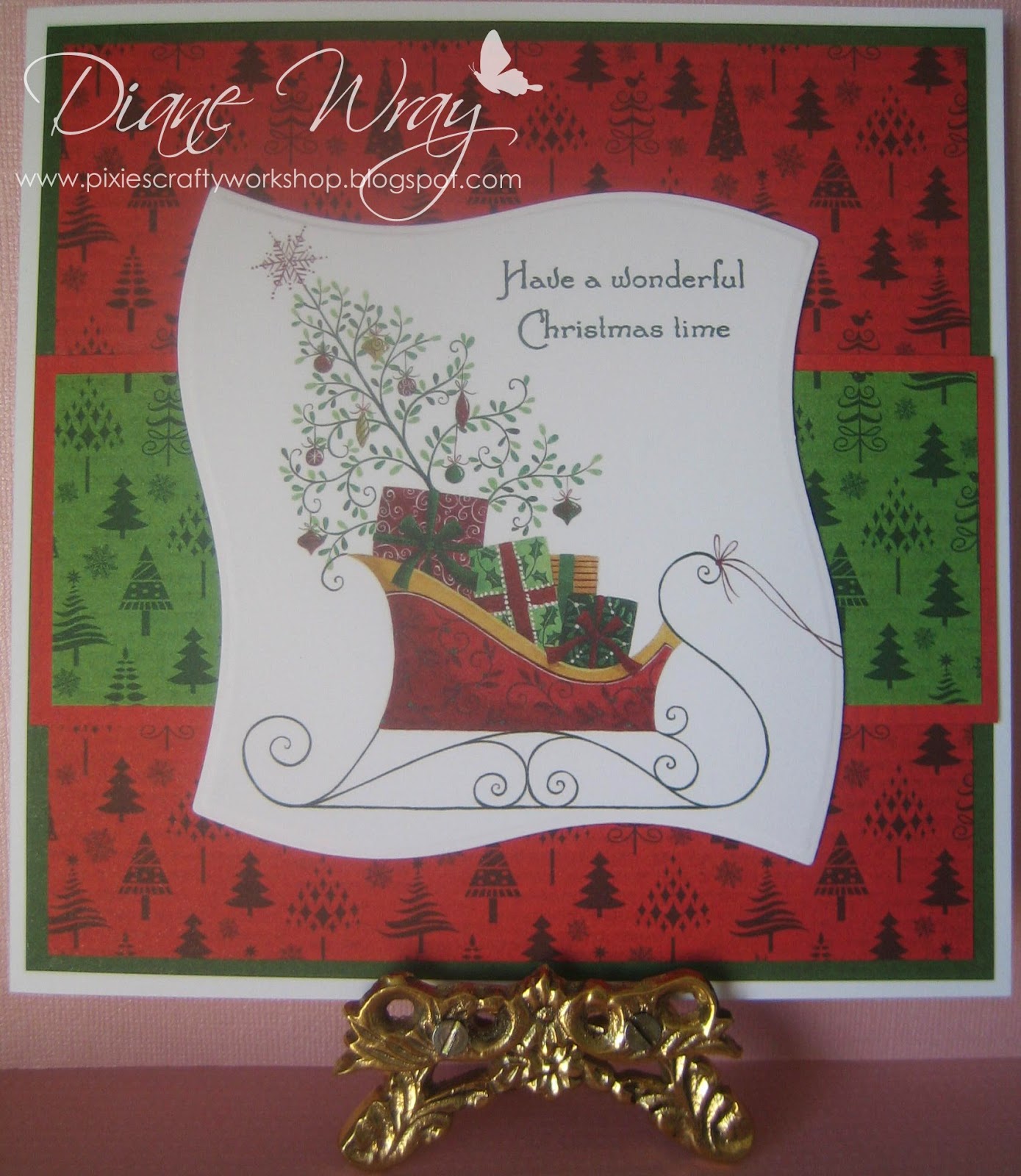 Oh Di dont you hate that.. and leering failure.. but well done of other two, Shaz in Oz.x

Nice cards Di,I like the way you switched colours between the cards, it gives quite a different look. I love the wonky square die cut shape.
Jean x

Beautiful Di, those LOTV art pads are so pretty. I'm sure you can do something with the failure though, waste not want not, etc!!

Two lovely festive makes here Di. Lovely sleigh image. Hope you manage to salvage the one that's leering at you!

Thanks for joining in with RUDOLPH DAY.

Two gorgeous Crimbo cards Miss!
I am here with orders - please go over to the Technique Time Tuesday Challenge blog and pick up a badge that is waiting for you! xx

Very traditionally festive! I too like the way you have swapped colours on each card giving different look. Lovely xx Jan

These are both great cards with the alternating color on the horizontal panels! I love that sleigh image!

Two brilliant cards Di, l love the image and those papers are stunning so beautifully presented in your gorgeous die too! x

Two super cards Di. I have that topper and was wondering what to do with it - looks brilliant cut with a wonky square xx

Two gorgeous cards Di, love those images from LOTV and the backing papers look fab, I have the blue set and quite quickly went off them but I have managed to use most of it up on my youngest Grandson Christmas card for this year but you wouldn't know because I can't upload my photo's.
Tried for 2 hours Monday night and all day today, I am worn out and thinking of jacking it all in.

It's so fun to see how people are crafting for Sarn 2-card challenge. Before I read your text, I scrolled up and down - I won't say how many times! - until I saw what you had done! Fabbiola!! Hugs, Darnell

Fab card, love how you switched between the colours. I bet your card is not as bad as you make out, we are sometimes (most of the time) our own worst critic! X

Love that sleigh! Your cards look fab...brilliant idea to switch up the bell band colour!

That wonky square is one of my faves! It looks wonderful on this card.

Shucks. I had that pad out and at the ready to use. Gotta come up with sumthinck different cos can't compete with these two beauties. Don't think I would be brave enough to stamp straight onto the LOTV image. Love those backing papers . Perfect colour tones. Hugs Mrs A.

Those are nifty cards. I like the papers and how you mixed and matched them.

Thanks for entering both of my CHNC challenges with your lovely cards - hope to see you again soon. x

Well, I for one, wanna see the failure too! (Seriously, failures help me a lot, when I see how somebody turned a boo-boo around). Your card is lovely (both of 'em) and when I see you use the Wonky Square, I always wonder why I didn't purchase that one. You use it very well. TFS & Hugs