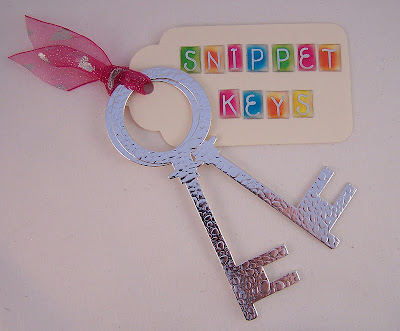 For the past year, the lovely Jules of Always With a Heart has been running a really fun challenge - to dive into those leftover bits of paper and card (aka as 'snippets') and use them up. I only began doing this in July 2011 but was very quickly hooked, not least due to the encouragement of Sandra of Stamping For Pleasure and the inspiration of Jules and all the other 'Snippeteers'. I had such fun and my snippets folder became the first place to check when making a card - the extra bonus was that I made a load of other terrific bloggy friends as well as picking up lots of new ideas.

So, when I realised that Jules was going to lock the Snippets Playground Gates after a whole year of hard work on her part, I was truly worried :( Where would the playmates all go with their snippets? With a lot of trepidation and some coaxing from Jules I've taken over the keys to the Snippets Playground, that's them above, aren't they cute? No way can I hope to emulate the gorgeous cards that Jules makes, but I'm going to at least facilitate the challenge! Jules has promised to drop in, and no doubt knock our socks off as always, and I do so hope you will also drop in to play.

There are no hard and fast rules, just make a card or anything else using up some snippets from that languishing stash! The snippets can be tiny or fairly large - patterned or plain, you can enter as many times as you like in a week and of course also enter whatever you make for any other challenges. The main idea is to share makes and ideas - and to try to reduce those snippets mountains :) There are no prizes - just the fun of joining in and sharing what we've made which is a prize in itself.

As Jules did, I'll leave the gates open until Saturday at midnight and I'll publish the playmates links to their posts each Sunday. Any ideas for how to reduce the heaps of snippets we all have will always be gratefully received - we're a nosy lot and love to see anything at all which would help in the reduction drive...err, a photo of a blow torch or a shredder in action probably isn't quite what we're looking for :))

I truly hope you feel inclined to continue/join in with the Snippets Challenge - if so, please leave a link to your offering in the Mr Linky do-dah at the end of this post :)

So, here's my use of snippets for today: 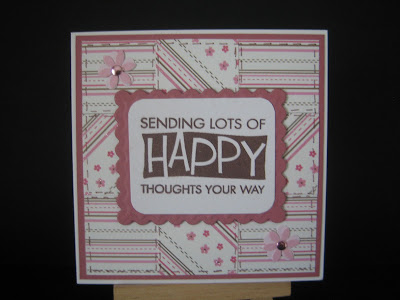 I really wanted to make a New Year card for you all but this is the closest I could find in the sentiments right now - this place needs an Elf and Safety warning! I guess lots of you will know the patchwork trick, but it's the first time I've used it. Just cut a square of background paper and then a couple of strips of contrasting paper the same length as the background but only one third of the width of the background. Then stick them down in a cross centrally over the background square and cover with an image, sentiment or whatever. There isn't enough room for me to dig out my little craft sewing machine right now so I just did some 'faux stitching'.

So, as John Wayne would say 'Wagons Roll'!!!

Fab card Di, congrats once again on keeping this challenge going. The mat on my card was cut in my cricut with elegant edges cart, wish I had bought this ages ago as it s fab. Happy new year, hugs, Amanda xx

That looks like a good start to me Di. Good luck with your new venture.
Hugs,
A x

Happy New year to you and your Family.

Brilliant card Di, luv the patchwork tut and your papers are gorgeous.

I shall definitely be joining in . . . just off to make a card with snippets . . . see you later.

Love the card Di, its gorgeous!

The patchwork trick looks great.. i'd never seen it before! Will definitely be trying that out! And the snippets challenge, I will certainly be joining in :) M x

Love the card what a great idea better than trying to stick little squares all over the place, must try it. Wish you a great New year and good luck in you new venture.

HAPPY NEW YEAR to you and yours!!!! Great snippet card! Love the faux stitching, I really must get my snippets out later and make a card!! After my yummy lunch out and annual trip to the Theatre to see snow White!!!

Happy New Year to you Di!
Not tried this Snippets Challenge before but I do have a few...er...Snippets, from which I may be able to use to keep me going a week or two!!! LOL!!
See ya later!

Thank you for taking over the keys of the snippet playground - I've really enjoyed joining in with Jules and intend to continue to do so here - in fact, I'd already prepared some crafty resolutions in which I mentioned Jules, so now I've amended that to point in this direction - you can read about here x

I just know you are going to do a brilliant job .. .. you certainly open up the gates much earlier than I used to .. .. which is always a good sign LOL!!!

I shall definitely be playing along .. .. lots of snippets still needing to be used up in my craft pod.

I look forward to playing along and so glad you took the keys over! I have enjoyed playing in the challenges when time permits and I have mountains and mountains of scraps, so thank you for keeping this going it challenges me to dip in my scrap pile first!

Happy to be a new follower!

Wish I'd thought about this yesterday, when I posted my scrapling cards as they were all made with snippets! I'll definitely be joining in as often as I can, gotta reduce that snippet mountain somehow! Hope you have a brilliant 2012, and I'm sure the snippet challenge will thrive in your hands.

Hi Di, Your card is fabulous great to to be able to use up snippets to make something as lovely as you have made here! this is going to be a great snippet challenge and hopefully lots will cotton on and join in, l'm hoping to do just that as soon as the festive period is over, hope you had a fabulous new year :) Sandra H

Well done Di, looks like you are off to a good start. Love the keys.

Snippets, what a fab idea!!!! Thanks so much for taking on the "job"!!!
Hugs
Lisa xx

Hello Di, and thanks for taking over the keys to the snippet playground ... I certainly intend carrying on making my snippet creations too. Your card is super and I like the patchwork technique - one to try out. Happy 2012 too. Elizabeth x

Hello Di, although I didn't always make it to the playground every week, I liked to pop in when I could, so it's great to know that you've taken over the keys. I love your patchwork design & such a simple idea, thanks for sharing.
Sally x

Hi Di. I didn't manage to get involved last year though I am trying to clear up some of my copious snippets, so I will try to join in with you. Well done for taking it on this year. Kate x

What a pretty card! Thanks very much for the tip, it looks much easier than punching squares and trying to get them all lined up neatly!

I'm off to pick bits of paper off the floor of my craft hovel - I knocked over one of my snippets boxes and there are snippets everywhere!

Wow... Just discovered your site. What a WONDERFUL idea! thanks to all of you who started this and are continuing it. Hope you don't mind a fellow stamper from the states playing with you all!

Hi DI, Entered my card and forgot to mention which was the snippets won't back link as l don't think that's right so my snippets where backing paper which is really old and in my stash box gems which are as old as the hills.........lol and that's about it enjoyed your challenge and will be looking forward to the next:) Sandra H

Hi Di
Love your patchwork design. I have had some playtime and managed three cards this week. Hope I make more regular visits than I managed last year. Lord knows my snippet collection is way too LARGE and needs reducing!

Great card. I never managed to enter whilst Jules was doing the challenge, so this is my first of hopefully many entries.
Linbyx

Oh Di...look at you! Such a big kind heart my friend and good for you taking on and keeping the life of the Snippet Challenge. Once I get back into the swing I'm going to join in! Looking forward to it!

Hi, my first time entering into the snippets challenge, have been a follower over at Jules blog but never joined in with the challenge. Hope to use up some of my scraps more.
Good luck running the challenges,
Sandy

Hello Di, here's my first snippet creation for quite a while ... couldn't possibly let your first week pass without entering :) Elizabeth x