Another up cycled robin

Yours truly die cut four, possibly more, robin images from the batch of shop bought cards we'd received from family and friends last Christmas - for some reason robins were a popular choice! This is another card I whipped up the other day: 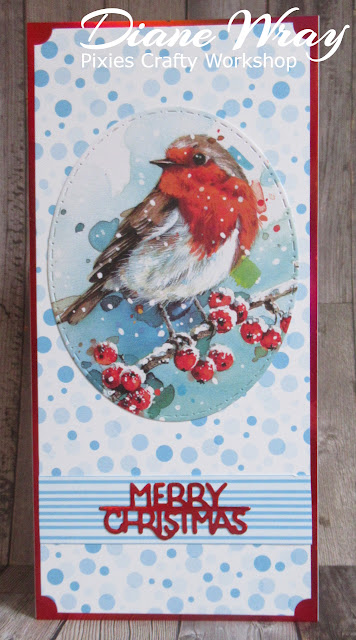 - a die cut robin image from one of last year's cards sent to us. The die I used is a Presscut 'Oval Stitch Hole' die then it was set aside

- snippet of Tonic mirror card 'Fire Stone Red', cut to totally fit the front of the card perfectly - had to be - due to the width of the robin oval image to be honest

- piece of DSP from the 12" x 12" pack of Lawn Fawn's 'All the Dots' paper pack bought as a mistake, (remember that 12 x 12 papers images are often much larger than their smaller 6 x 6 friends!), trimmed to just a bit smaller than the red mirror card layer and then the corners given an inward curve using an X-Cut small corner 'double' curve punch

- at that point, I used a snippet of leftover 'dots' paper and flipped it over to the opposite side pattern and then cut a strip for the sentiment - straight across although the pattern itself is very lovely and also diagonal

- meanwhile I die cut the sentiment using a teeny snippet of 'Fire Stone Red' mirror card and a Tonic Studios 'Mini Moments Merry Christmas' die (one of my favourites for small places!)

It's remarkably easy to order a 12" paper pack by mistake .... if you're in a bit of a hurry - just one wrong click and momentary loss of concentration is all is takes. Sigh. Once the order arrived I realised my stooopid mistake and then rashly ordered the 6" square pack as the pattern on the 12" is certainly a lot larger. My idea was and still is to make some matching envelopes to use up the 12" paper. But it worked well for this DL card IMHO.

Len fell in love with this card, despite my worries that it's perhaps a bit 'over fussy'. The dots from the backing paper being echoed in the image background really caught his eye and he immediately picked up on that point of detail. So my idea worked eh?!

And hooray, I can enter this card into one of my favourite challenges over at Christmas Kickstart Challenge #65. The theme is 'Never in a Nativity'. So it's snowmen, gnomes, penguins - in fact anything that you wouldn't find in a Nativity scene. You have all of August to go and play! See you there as I want to go back and add more. Robins fall into the 'Never in a Nativity' category - yet there is a touching story about the robin and how it got its red breast.

A very sweet story. We have a resident robin in our back garden - he tolerates a mate during the nesting season but they're generally very territorial and, I've said previously, will fight ferociously to protect 'their patch'.