March of the gnomes - end result

Last week I posted about assembling 20 little Simon Says Stamp gnomes HERE. The little lady gnomes were kindly die cut and sent to me by Karen L all the way from the USA, along with some spare card so I could use my little 'gnome chap' die to make companions for them. Using my Altenew mini die cutting machine I ended up with a little army of 20 gnomes - eight lady and chap pairs and four lone ladies. And here's a peek at some of the finished cards: 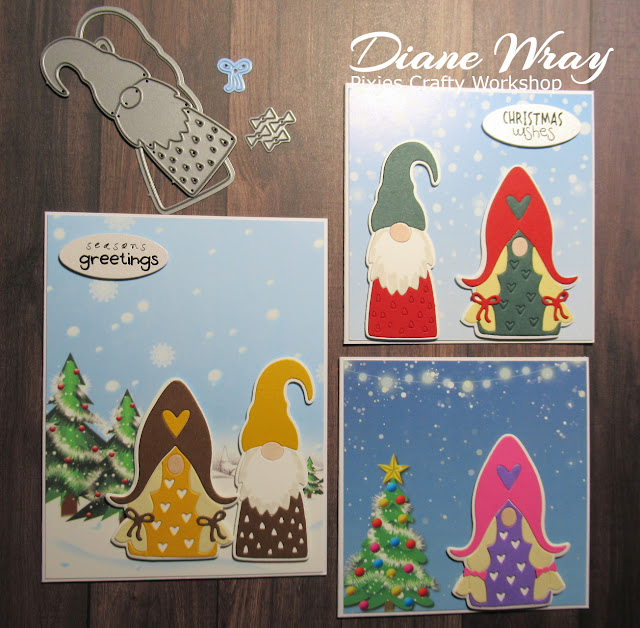 - die cutting the chaps then assembling the gnomes took forever, Karen must have the patience of a saint. The little chaps aren't too bad but the ladies are more painstaking to assemble. I cut the chaps from the spare snippets of card Karen had sent - so that the pairs would co-ordinate yet not have the same outfits (just by swopping the hats and lower body colours)

- quite rightly, Karen hadn't included any teeny bows for the little ladies' braids - so I rummaged through my own dies and found a bow from Marianne Creatables LR0467 set of 'ballet' dies which suited perfectly. Some of the snippets were too tiny even for that so a further rummage turned up a teeny bow shaped die from an Impression Obsessions set of dies called 'Kite' - result!

- backgrounds were trimmed down from three different scenes in the KanBan 'Christmas Wobblers' pack of pre-printed backgrounds - so that I could make 12 cards, four of each using each scene background, just wearing different colour combinations

- glued the backgrounds to the card fronts

- finally, added Craftwork Cards pre-printed and die cut sentiments to eight of the cards - the backgrounds are made using glossy card (as shown in some relection from my daylight lamp - sorry!) so I had to avoid stamping the sentiments

I did love making these cards - they certainly took me quite a while in several sessions, just as and when I felt the inclination. A massive thank you to Karen - you're a star my friend!

I'm entering the current Allsorts Challenge #650 - where the current theme is 'Christmas'. Hooray, for once I made the deadline - I miss entering this challenge so often as I'm quite a slow thinker/crafter

Speaking of challenges, a little reminder folks that the Christmas Snippets challenge is still running over at Christmas Kickstart, where it's my turn to be 'Jo's Christmas Elf' for the month. Why not join in? So far a lot of you already have played - Jo is kinder than me though and you can actually play up to three times, with a maximum of seven other challenge entries each time you enter a Christmas snippets make. This is now another one of my favourite challenges.