'We'll be gnome for Christmas'

That's one of the 'punny' sentiments in a NBUS set of stamps and dies that I cracked open to make six of these cards a couple of weeks ago, before the shoulder incident: 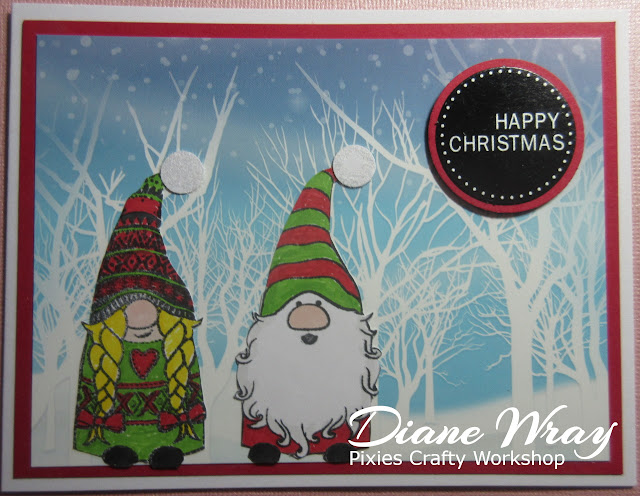 - layer of SU 'Real Red' card, cut to an eighth of an inch smaller all round than the card blank and glued to the card front

- a 'scenic' background, one eighth of an inch smaller all round - trimmed down from a KanBan scene in the 'Christmas Wobblers' pack of pre-printed backgrounds and glued on top of the red layer

- the little gnomes were bought from Amazon ages ago - mostly as it was the first time I'd seen a little lady gnome stamp quite like this one. Stamped using the Misti and Memento 'Tuxedo Black' ink

- then came time to die cut them and my asses ears went up! The set of matching dies only has dies for the two other gnomes, which I'd decided against using (as well dies for a toadstool house, signpost and circle for the 'pom pom')!!

- so I had to set to and fussy cut them using small scissors - whilst quietly grumbling to myself then glued the two gnomes in place. Discovered I was one male gnome short and everything had been packed away (so one card in the set of six has just a little lady gnome and a slightly different layout)

- final touch was to use a SU 'Itty Bitty' round punch to punch out white pompoms rather than use the little die in the set of dies. Then add Stampendous 'Fuzzy Fun Flock' by covering with glue from a glue pen and patting the fun flock onto the pompom

I now have a really uneasy feeling that the dies themselves might have been a starting point for the set of stamps (gulp, hopefully not copyright theft?) and the manufacturer (in China) added the two very cute stamps I used - but didn't design and manufacture extra two dies for those stamps. The set was very cheap, despite a bit of a wait, and it's fun to use although, that'll teach me not to do enough homework before ordering and then using goodies!

The background is seriously chopped down from the original 6" x 9" one. But I knew this when I ordered them - some of them come with really quite childish looking parcels in the snow - as my background did. So that got chopped off straight away and then I nibbled away with the trimmer until I was happy with a final, fairly simple, background. The pack has 36 backgrounds in (6 each of 6 designs) and to be honest saves such a lot of time and effort when you're at the middle of November knowing you just can't make many more cards.

As this is a first outing for a few things (the KanBan backgrounds, the stamps and dies as well as the Fuzzy Fun Flock) I'm adding this into our lovely Darnell's NBUS Challenge #20 HERE.

And of course, I'm adding it into ScrappyMo's Rudolph Days Challenge for November!