Determined to enter into this month's 'Let's Squash It' challenge, open until the end of the month, I had a little play the other day. The theme is to use a Christmas embossing folder and stamps - and this is what I came up with: 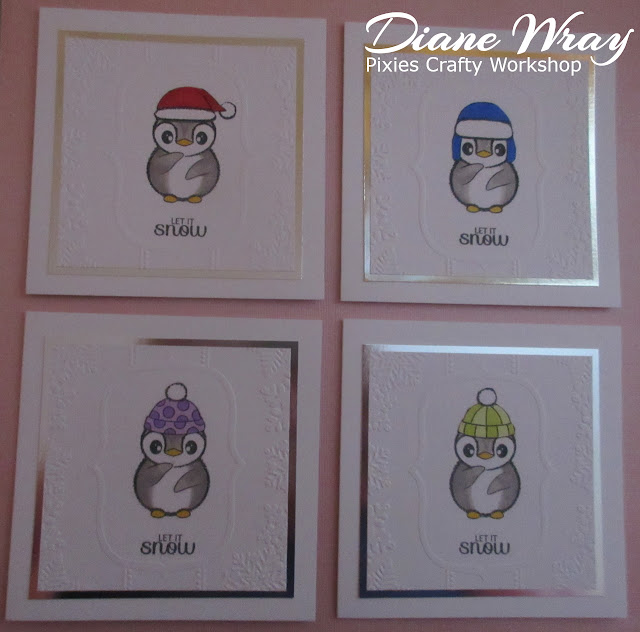 The light here was dreadful when I took the photo, but needs must when the devil drives as they say.

- piece of white card stock, embossed using Crafts Too's 'Snowflake Banner' embossing folder - as I wanted to stamp my image and sentiment directly onto the card and it's the only Christmas folder with a plain centre panel that was suitable here

- next stamped the penguin and sentiment onto the embossed piece of card using the Misti, Memento 'Tuxedo Black' ink and stamps from Clearly Besotted's 'Let it Snow - CBSLE470' set of stamps. I made six cards in total, two of which are repeats of a couple of the hats.

-then glued that panel onto the card front, using Collall again

- after dithering I decided against adding white fuzzy fun flock to the hats as I just liked them as they are, left plain. Plus, being a bit OCD, I worried that the two shades of white (the fun flock and the background) wouldn't be exactly the same. I know, I know - need to get out more!

I was mooching around Clearly Besotted's website recently and this set of penguin stamps popped up in their clearance section. It doesn't have matching dies but fussy cutting the little hats was fun anyhow. The stamp set seems to have disappeared altogether now from Clearly Besotted, I possibly got the very last one - sorry. I wonder if it's because penguins don't live at the North Pole after all Jane? ☺ Clearly Besotted have also stopped adding matching dies to their new stamp releases which is such a shame IMHO.

Apart from the Let's Squash It challenge - 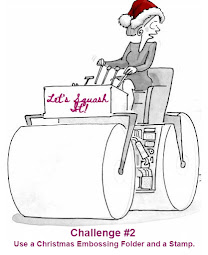 and as it's a first outing for the 'Let it Snow' stamp set I can add this into Darnell's NBUS challenge#20 HERE.

Another six for the 'Christmas box of cards' and, apart from making a few more IF I have time, that's it for the moment as time is ticking on. The rest will be charity cards. Just need to write and post them all now!

On Wednesday morning I set to and for the first time ever made a pumpkin pie for Thanksgiving, even though we don't celebrate the day over here, I thought it would be fun to make. Wow, so easy if you cheat and use a bought pastry case from M&S! It smells and tastes absolutely gorgeous and  the 'two-legged' mouse, aka Len, loves it - as well as the leftover filling which I baked in a Pyrex dish - and neither of them ended up with cracked surfaces either. Nom, nom.