What a miserable week for weather here in deepest Hampshire. One minute it was too hot and now it's too wet. We British are never happy with our weather I fear.

Thank you so much for all the lovely comments about the future of the Playground. Many of you made very good points, which sort of reassured me to keep going as I am. And we had a jump in the number of entries to challenge 385 as well, hooray. There won't be a switch to Instagram or Facebook if I can help it - it's probably just me but I find it an option I don't wish to embrace. I did giggle when one friend kindly suggested in an email that perhaps I could shorten my posts - nope, ain't gonna happen. Luckily I learned to touch type in some 'spare' lessons in the 6th Form at school and basically can fly along when I'm writing a post, So, what you read is often just me talking through my fingers (I HEARD that snigger!).

Good old blogger continues to evolve - at last they've now made the labels options easier to work with on the new interface - but this is 'end user' testing of something that should have been thoroughly tested prior to release. I guess we get it for free so should be grateful - and in fairness it does seem to be evolving with our issues being resolved.

Anyhow, here's my snippets card for this fortnight. I was really stumped for a prize that wouldn't take ages making a 'sample' card. And was also a bit shocked at the fact I've been unconsciously letting the Playground toy box run low as well. I didn't have time for a very complicated card with masking, colouring etc so in the end, I opted for a card using a recent snippets strips technique - and when it was finished I cocked my head on one side and realised it's by no means as 'random' as it should be. The strip widths ought to vary more - oopsie. And, I need to put a fresh blade and/or channel mat in my trimmer as the cutting is a bit rough looking (picked up by the camera needless to say). No time to make another one though so here it is: 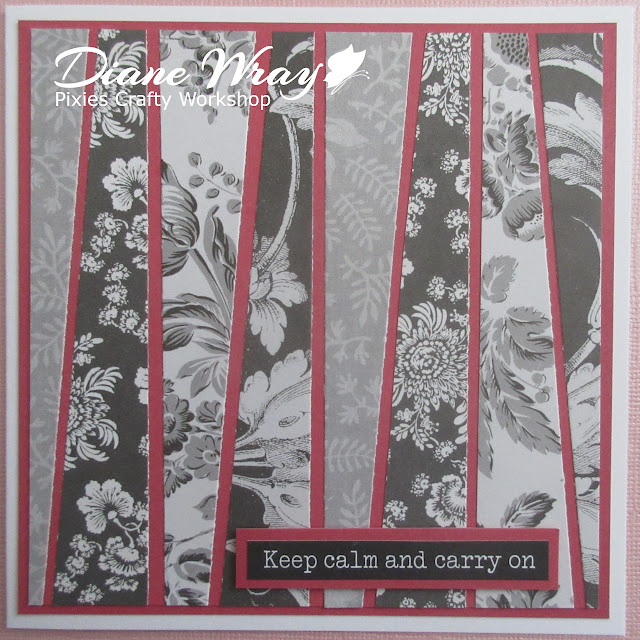 
- 5" x 5" square white card blank
- snippet of pink card - SU 'Primrose' - as a backing for the strips, left bigger than I wanted as there's trimming to do at the end of the process
- snippets of monochrome paper from a really ancient Papermania Capsule Collection 'Mono' paper pad - dating back to my very early days of card making
- I then trimmed a load of angled strips from the snippets - sadly making them too uniform (OCD strikes again!)
- then used a glue pen to adhere them to the piece of pink card - almost finished when I realised it was very uniform, sigh
- another snippet of the same pink card, trimmed to just quarter of an inch on two sides smaller than the white card blank (ie. it measures 4.75" square)
- then trimmed the striped panel down to 4.5" on both the top and side measurements
- glued the striped panel to the pink one and then glued that to the card front (all using Collall All Purpose glue as it's so moveable)
- used a snippet strip of the pink card to adhere a white on black sentiment to - from the Clarity Stamps 'Words Sticker' set of quite unusual sentiment strips
- trimmed it at the ends, added thin strips of sticky pads and popped it onto the card front - finished in the shake of a lamb's tail
And, here's the prize for this fortnight - a smallish one for a change but also an interesting one if you like fairly 'to the point' sentiments: 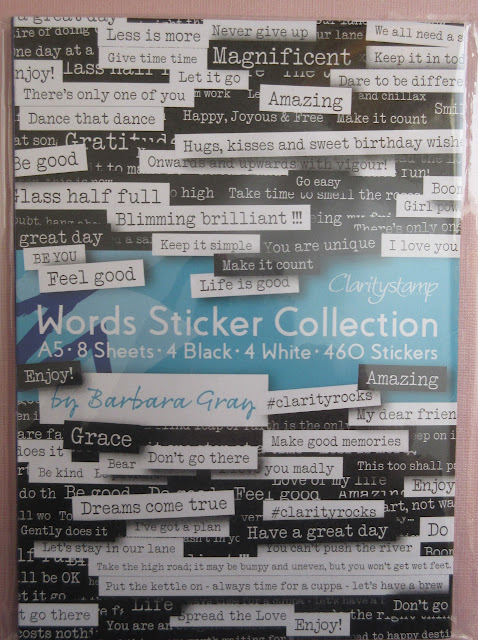 Clarity Stamps 'Words Sticker Collection' - 460 stickers, 8 sheets with half in white and half black.
As always, the Snippets Challenge will run for two weeks and the Playground gates will close at 11am UK time on Saturday 19th September. The gates will open again at midnight UK time on the same day.


Remember, if you link into the Playground and don't say clearly that you want to be in the draw in a comment on here, then you will be bypassed if your name comes out of Mr Linky. I'm sure you all know I ask for a positive 'yes' on the blog post itself - just in case you're only playing for fun - otherwise I don't add you to my little list.
As I used this particular set of Clarity sentiment stickers for the first time, it means I can join in with Darnell's NBUS #18 challenge HERE! To be honest though, if you decide to buy any, I do think the combined general and Christmas sentiments set is more versatile.
Latest news of Dudley - he's becoming a little tinker! His last trip out into the garden for a 'wee' is around 10:30 to 11:00 pm, before we 'batten down the hatches' for the night here. We may still be awake, but the house is ostensibly closed down - and he knows that ......... unless it was urgent. However, the little tinker has put the jigsaw together and worked out that he often has a sneaky treat when he comes in from the garden after doing 'the late evening biz'. Need I say more? The other night he did the usual and came in - then just TWO hours later was on the bed, and then lying on top of Len, wanting to 'go out' at almost 2am in the morning for goodness sakes! We didn't dare risk not letting him out in case of an accident - but the little monkey only did a tiny dribble then came indoors and pointedly stood where the treats are kept! Naughty, naughty ☺.
On the subject of dogs, in the UK right now there's a really worrying spate of dog thefts going on. I won't go into all the detail but a scarcity of dogs for would be owners to buy due to COVID, along with breeders asking up to three times as much for dogs now, makes it a bit of a lucrative market. Our back garden is now like Fort Knox - plus, although we'd have rarely done it previously, Dudley is never allowed out into the garden now without one or other of us being there at the same time. Dogs have even been stolen with their litters of puppies and some of the cases are utterly heartbreaking. We're pretty sure that Dudley would kick up a real stink if we had an intruder in the garden, when he was indoors let alone outside, but it's a risk we can't take. What a world!
Lots of love from us all - Parsnip, Dudley and of course me,