Despite Mr Mojo taking a hike here, I was determined to join in with ScrappyMo's Rudolph Days challenge which runs until the end of this month.

Whilst laid up in bed, I did manage to find time to keep a little eye on a couple of Facebook 'de-cluttering' groups and snapped up some bargains. To be honest, this place is bursting at the seams but I did only buy items I'd use a lot and/or had wanted for some time. And all items were unused as well! The SU set of stamps and really complementary dies I used for this Christmas card were on my wish list: 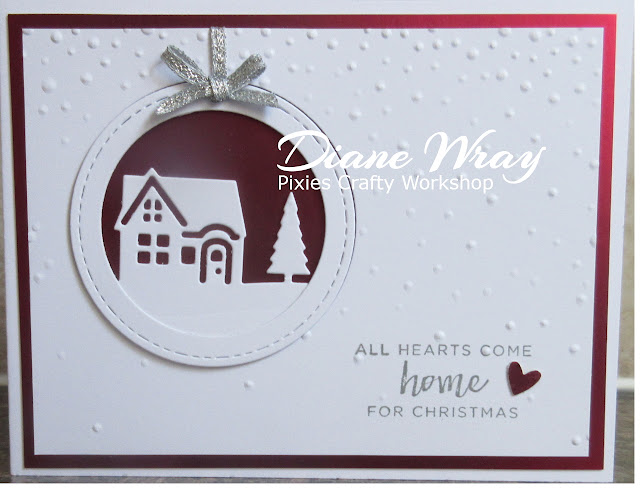 - 5.5 x 4.25" white card blanks, I made four cards the same and three are tent style and somehow I managed to make one with a side opening, which I do quite like as a format. I buy 6" x 6" white cards from Hobbycraft and trim them down to size - and also trim the envelopes to use as notepaper in the craft room so not as wasteful as it may sound

- 5.25" x 4" red satin card (from Joanna Sheen) - which always looks so rich and is top of my list for Christmas card stock

- used two circle dies, one inside the other, to cut out the circle from the white card. The inner die was a Tonic Studios plain one and the outer one was from the 'Stitched Circles' set by The Works. That left a circular aperture as well as giving me a stitched white ring to use later on in the making of this card

- at that point I could stamp the sentiment, so I used SU 'Smoky Slate' and a sentiment stamp from the SU 'Hearts Come Home' set of stamps

- glued the red layer onto the card, topped by the white layer

- final touch was to use the SU 'Owl Builder' punch to punch out a tiny little heart  - from a snippet of the red satin card and glued it in place, again using Glossy Accents purely as it was already open on my desk

I got this idea from another blog and am so grateful to Dawn Griffith who is a Stampin' Up Demo lady, she made it all so easy - easy enough for me to make four the same as I was at it! Her blog post is HERE as well as a link to a video Dawn made. Dawn did use a length of narrow ribbon along the lower part of her card but to be honest, not only was I short of the silver ribbon, but I thought the card was fine without it.

She also changed the coloured layer for dark blue and also soft baby blue on other cards using the same design - all of which look lovely! Thanks Dawn!

It's a great layout for a card Di, one that can be transformed by simply using a different colour matt. A beautiful CAS card. How very dare that mojo take a break without asking... Always a blessing when we are inspired by others hopefully this creation has helped kick Mr Mojo in touch. Keeping my fingers crossed for all & wishing you well.
Hugs Tracey xx

Oh, how lovely CAS card! The faux bauble looks fabulous with the little home and tree inside the aperture! I have to remember this for some Christmas cards!Thanks for sharing! :D The finishing touches looks so lovely!
Hugs!

Very beautiful - the bauble idea could be used with all kinds of festive images and would be a great way to make a small image into a stand out focal point.

Hi Di,
Happy rudolf Days.
I love this wonderful card and that bauble is gorgeous.
Love this design.
Dawn surly has some wonderful colours in her designs.
As Jane said the bauble could be used for lots of different images.
Love that embossing folder and the luxurious red satin card used.
Thank you for joining the Rudolf Challenge.
Lots of crafty love. Jenny L. DT

A beautiful card Di, I love the red with the white.

Looks fabulous. Thanks for sharing a link to the video too. Congrats on getting 4 more lovely RD cards made.

It is great when you can pick up a bargain even if you don't really have space for it - LOL. This is a super card

Such a sweet scene, Di, and well done on making multiples. I should be doing the same, since I'm way behind schedule on making Christmas cards. The first months of the year have been slow but I'm starting to catch up. I guess my productivity mirrors DH's health state, so I'm a doubly happy girl right now.
Marianne x

A lovely card. I really like the sentiment. [Bunny]

Wonderful Christmas card. I like the sentiment and also color-combo. Very elegant and perfectly done. :-)
Have a nice day,
Sonja

Hi Di your card is gorgeous. I love the design. You take care now. Hugs Jackie

I love this card! The way you created the bauble is so clever, and the little town scene is very sweet.

I hope you are getting better Di, I know it is a slow go, but hoping there is progress there as well. Your card is stunning! I love the falling snow embossing folder and I love your house scene. So pretty! Dawn has been a SU demonstrator forever and I've watched her for a long, long time. She is indeed creative and very good at her job as well as a wonderful teacher. Glad you were able to get this at a good deal too my friend! It is bursting at the seams here too and I've gotten to the point that it only comes in if it is something I've wanted for a long time and will use a lot as well. We have to draw the line somewhere don't we?!! lol Big hugs, Brenda

This is a fabulous card Di and great to get this set brand new and a bargain to boot! I love the red and white and the snowfall embossing and super sentiment finish it perfectly. x

Love that red satin cs you used! Such a great card - wonderful Christmas ornament, nice snowy panel around it. You've got me curious about the Facebook "de-cluttering" groups - might have to take a look! Though I should be de-cluttering myself, not adding more....

Gorgeous card Di, I love the layout and the red + white colour combo. Your new goodies are fabulous - especially love that sentiment. Facebook de-cluttering pages?.... it's a good job I haven't got a Facebook account! xx

A darling card, so Christmassy!

Hi Di, thanks for your lovely visit to my blog. I adore this gorgeous card and the embossing folder is a fav of mine too..great dies.x

That is a gorgeous Rudolf day card, Di! I love it! Simply elegant x

So pretty, Di.I love that die and your card is really pretty!

I am ashamed to say how little I have been around blog land lately. I did not even know you were suffering. Take care my dear.

I am not able to sit for very long and have saved up my sitting to attend a crop that I love just a couple blogs from my house. They meet every second month and if I medicate myself really well with pain killers I manage to attend, but not sure the cards are perfect as I am a little loaded from the pain pills...lol I bring a big ottoman and prop my knee and that helps.

At home, I am not sitting at the computer visiting blogs as i find it hard to bend my knee like that for long, so that is why i did not realize.

Take care my dear and thanks for taking part in the March Rudolph Days Challenge.

I can see why you wanted this, Di--wonderful card!