What a week it's been! First of all I've been trying really hard to rest this shoulder, so serious crafting hasn't been 'on the cards'. I tried cutting a die cut using the Cuttlebug earlier in the week and it was just too painful - OK the die was a cheap and complicated one but even so. It's getting better slowly, so long as I don't do anything to 'pull' it again which takes me a step backwards - easier said than done!

And, middle of this last week I had yet another birthday. It was quiet but a lovely day just the same - and HUGE thanks to all you brilliant people who sent cards, gifts and also emails and Facebook messages. I feel so blessed to have such a caring group of friends - mwah! xx

SO, with all that's been going on I don't have a new snippets card for you I'm afraid but there is a prize (in fact, two the same!) if you scroll down this post.

And, a LOT of time has also been spent with Len - sorting out things ready for a new family member who will join us a week on Thursday. Believe me, this little chap is causing quite an upheaval here - plus enough stuff to set up a pet shop!

Meet Dudley (also known as the 'Cool Dude' according to Len, due to his calm and very laid back attitude to life ........so far of course!): 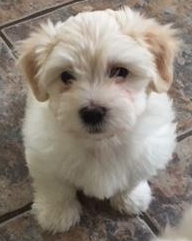 He's a Havanese puppy (born on 22nd July) and the most adorable little fluff ball ever! A few of you do already know he's coming to live with us but this is his first appearance on 'social media' - grin.

This means that life will be rather different for us no doubt and, to be honest, it will do me the world of good to not be ensconced at the desk either crafting or blogging for hours at a time, as so often happens. I think it's the root cause of this shoulder problem really.

I'll carry on crafting when time (and Dudley) allow - and most certainly the Snippets Playground will continue! As I said, the main reason for no card this fortnight is purely as I'm trying to get fit for all those Dudley cuddles ...... and the other things that I know only too well come with a young puppy!! Eeeeep!

However, I recently managed to buy two more identical dies which were a very popular prize a little while ago - it's taken ages for them to be back in stock:

I used it HERE on a card if you want to see it in action! It looked like this - and it's about to wing its way to Len's youngest great-nephew Joe this coming week: 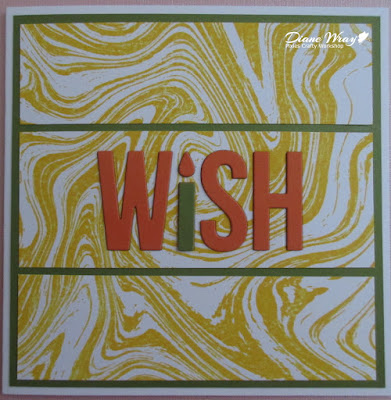 It's the MFT 'Wish' die and so versatile, I'm just sorry I couldn't make another card for this post using it. And, I can't lay my hands on any more of that great 'Marble' background stamp right now either. So, it's just the die itself this time - but with two chances.

As always, the Snippets Challenge will run for two weeks and the Playground gates will close at 11am UK time on Saturday 29th September. The gates will open again at midnight UK time on the same day.

It's a maximum of ONE entry and please say in a comment if you wish to play and be a possible winner of the prize(s). Please also link back to the Playground in your blog post to be eligible for the draw. There are two on offer!

Love from Parsnip (currently muttering to himself and building barricades against puppy intrusion!) and of course from me,