I made a pretty quick card -just the colour cornflower - along with a flight of butterflies ready to flutter away: 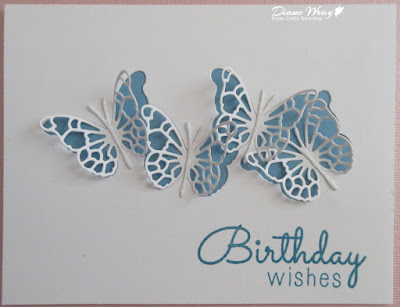 - snippet of my version of cornflower blue card (it's actually SU's 'Marina Mist' now that I've checked against the swatch - but cornflowers do come in different shades of blue and this is one of the lighter shades - tee, hee)

- I trimmed the snippet of blue card to just a bit bigger than I wanted the panel of butterflies to be. Then pencilled around it on the front of the card so that I'd keep the die cuts about quarter of an inch inside the pencil lines - to allow for sticking the blue panel on place later on

- then used the Misti to stamp the Birthday sentiment onto the card front, using a little SU 'Marina Mist' ink pad and a stamp which came with the All Occasions 'That Folder' set

- next die cut four solid butterfly shapes into the card front - overlapping them slightly - as well as keeping them quarter of an inch inside the penciled 'frame area'. I used the Memory Box 'Isabella' die for this

- onto now assembly time, I used red line tape to adhere the blue panel to the back part of the card front - and little snippets of red line tape to make sure all the 'pointy and therefore likely to lift up' bits of the die cut front apertures would be held securely in place as well

- popped the bodies and feeler sections onto the lacy butterflies, then added them over the blue backed die cut apertures on the card front, overlapping as seemed best, using Collall glue and a fine liner bottle ....... then called it done!

One slight 'blip' to my eagle eyed scrutiny is that I can only just tell there's a darker panel across the inside/centre of the card if I hold it up to the light - and it was also a bit touch and go as to whether I'd end up with a slight ridge on the card front around that area as well. These are very minor points, but another time I would use 300gsm card rather than what I think is 250gsm. I know, Little Miss Picky here!

I'd spotted this sort of card with solid cut-outs and then matching lacy butterflies over the coloured apertures not so long ago and thought it such a pretty idea.

I was going to say that you need both the solid and also the matching lacy/open dies for this design - but thinking about it - of course you don't! You would use an open lacy die to cut across the card itself as I did with the solid one which would still give you the line of apertures in any case. Although you would still then need to die cut more complete butterflies to add to the backed apertures if you overlapped them.