All puffed up for Christmas

I love robins, especially when they 'puff' their feathers up to keep warm. So I was delighted when a sweet friend offered me a set of pre-stamped images to use for 'batch baking' some Christmas cards. I made eight cards the same in this run - and still have some robins left to play with: 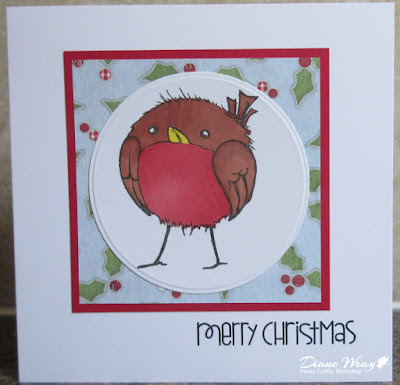 - once I'd made the 'toppers' and could work out the spacing, I stamped the sentiments before gluing anything at all to the card front - using the Misti, Memento 'Tuxedo Black' ink and a stamp from the Paper Smooches 'Christmas Sampler' set of sentiments

- asked in-house critic if I should add googly eyes, the verdict was 'nope', so I obeyed! Ha, and probably stopped the cards from leaping over the thickness limit for normal sized letters :)

Breathed a huge sigh as am slowly getting back on track with the self-imposed Christmas card making target!

I was still short of inspiration though and was so thankful for these lovely images to kick me into action! I've since found out that they're from a set of three by Hobby Art called 'Round Robin' - what a perfect name :)

Crumbs, I almost missed ScrappyMo's Rudolph Days for September challenge this month! Entering this, at the gallop :)