Today is the Birthday of one of my very best friends, dating back to our boarding school days! Moira, I hope you have a fabulous day!

As we oldies know, even if we have aches and pains, it's what's going on in your mind that keeps the years at bay. Ha, in which case I should be just about approaching my late teens mentally! Never lose the sense of fun and silliness, and with a cheeky smile you can usually get away with most things!

Anyhow, I wanted to make a memorable card for Moira's special Birthday to sum up how daft we can be when together. So, I sent off for a new stamp set and then got the jitters about colouring it. However, short of selling the stamp set on or giving it away, I had to attack it - and so I did - one week ago. Amazing, I ended up with time to spare and this is the result: 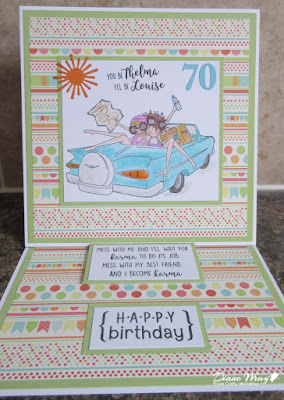 - 6" square white easel card - ie. one card with a line scored horizontally across the centre of one half and firmly folded and burnished to remain well folded plus
a panel for the front of the card

- papers from a QCME freebie pad called 'Let's Fly Away', trimmed slightly smaller than the plain green card and glued in place

- despite having a ton of dies here, not one was the right size so I just trimmed the image down and then popped it onto a backing of more green card and glued it in place on the front panel

- trimmed the 'karma' sentiment (which I just love!) and popped it onto a backing of green card then added some thick Hunkydory sticky pads to the back before sticking it onto the base part of the easel card to act as a 'prop'

- stamped the {HAPPY birthday} onto a snippet of white card,  using Memento 'Tuxedo Black' ink and a stamp from the Hero Arts 'CLO47 Messages' set

- die cut the numbers and sun from medium strength adhesive sheet backed snippets of orange and turquoise card using the sun from the Joy! 'Sun and Moon' set and numbers from the Memory Box 'Classic Numbers' set and popped them in place

In the end the stamp wasn't really as frightening to colour as I'd feared. Mind you, it would have been totally different using Pro markers as opposed to nice sharp coloured pencils! And, as it is, that car looks like it's due a respray in close up! Bit like me really :)