One of our little neighbours just celebrated his 1st Birthday. After all the Christmas cards I made for the Playground Celebrations, I just sat and stared into space for ages with no idea what to make for him - in the end I came up with this: 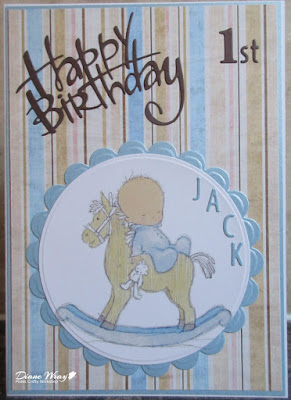 - patterned paper from the LOTV 'Bear Necessities' paper pad, trimmed a bit smaller than the blue backing card and glued in place

- the image is from the LOTV 'Babies' Art Pad, die cut with a Tonic Studio's circular die and then layered onto a scalloped circle of pale blue pearlescent card

- finally I glued the assembled image topper in place and called it done!

Some of you might have picked up that I was struggling with my much loved pink Cuttlebug here in the weeks leading up to Christmas. Thankfully, Santa brought me a new one (I'll get used to the retro shape and bright green in time - although the folding handle is a revelation, great idea!). I used the new CB for this card and was astonished at just how easy die cutting can be - I'd obviously forgotten as my old CB became old and cranky (sounds like me!) with much less pressure, meaning I had to fiddle around adding shims for a decent cut!

Wahoo, happy dance here! And Santa did consult me beforehand - rather than waste the little stock of cutting plates I have as spares I decided to stick with a Cuttlebug. Takes up less space than some of the other models as well - but one day I'll have a bigger one as well, maybe :) Just need to clear some space and move a few things around.

Many thanks to the prize winners for sending me your addresses so promptly! All prizes apart from Kitty's were posted off yesterday - I think Kitty is having computer problems so will just have to wait until I hear from her. I have a slight feeling she did move house so am not going to risk sending her prize to the wrong address :)