About a week ago I was idly flicking through the box of received/shop bought Christmas cards that I always hang onto after each Christmas. Am quite selective though and if I truly can't see any way a card could be up cycled then it goes off to one of the supermarket collecting points in January for The Woodland Trust. I always hang onto hand made/crafted cards and absolutely love looking through them - those I won't ever part with, or re-use, needless to say!

Back to my 'idle flicking' - this is the glossy 'shop bought card' that caught my attention: 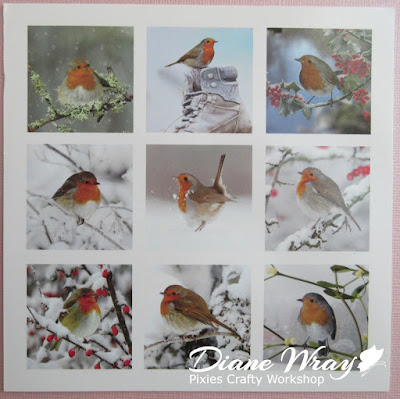 I love robins and it's such a pretty card just as it is really. But, nine on one card seemed much too tempting not to have a play with.  The images are quite small, about 1.5" square each and no sentiment, but a die set that I bought not too long ago came to mind.

I must confess that I'm quietly delighted with how the three cards I made out of that one card turned out - here they all are:

And here's a single one on its own, for a better view: 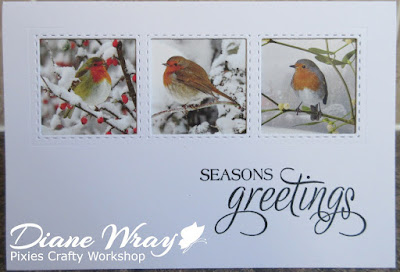 - one triple window die from the Just Rite Frame Set 'Three in a Row' to die cut the apertures. I did have to trim a teensy bit off one side of the card before positioning the die, just to be sure it would fit through the Cuttlebug in a single layer. The secret is to line up the die so you have it at equal distance from the top of the card as well as on either side - if you're aiming to make a similar card

- so now there was a card with three stitched apertures i on the front - cool :)

- next I double checked the robin images and sadly each one would need to be positioned separately - it was a gnats whisker but too risky to try and adhere strips of three at a time, sigh just my luck :(

- backed each aperture with red line tape and trimmed the images so there was a good overlap before adding them behind the apertures. One tip, I added all the red line tape around the apertures for each single square before starting to add the images from behind (by eyeballing from the front of course)  and then just peeled off as much backing as was needed as I went. Reason? Too much of a chance of accidentally sticking bits where not needed - remember am still recovering from 'turquoise-gate' here!

- now the images were in place behind each aperture - and of course this was the point at which I fretted about wrecking the whole venture, getting ready to stamp the sentiment

- backed the inside of each front of the cards with a slightly smaller piece of white card stock using red line tape, so I could work without any stray 'sticky bits'

- then, using the Misti I aligned a stamp from the triple stamp Inkyylicious 'Seasons Greetings' sentiments set and inked it up using Memento 'Tuxedo Black' ink and stamped it in place - phew, always a risk but it worked just fine! Should have done that earlier really but I just couldn't visualise which of the sentiments in the triple set would look best.

The die set also comes with an outline die to cut those frames in a row, 'free-standing', as an 'add-on die to a card top - if that makes sense And there are also three dies to cut smaller 'stitched' square inserts or cutouts. Really versatile!

They also do a two by two die (ie, four squares) and I so wish I could recall just who perked my interest to go hunting! Apologies but I do look at so many blogs each week, sigh. Bad  for the purse!

Card(s) all done, and I had three almost the same - apart from the slightly different images and the in-house critic gave them a double thumbs up - yay!

This card is for Craftyhazelnut's Christmas Challenge #300 -'Use a sentiment' of course.

As well as Hazel's other Christmas challenge blog, which is Craftyhazelnut's Christmas Challenge Extra for September.