More decent weather this past week - yippee! Here's hoping Summer might just be on the way. The forecast is for high temperatures down here on Monday and Tuesday - which perhaps means that Darnell is bringing the sunshine with her to Southampton :)

Without any more ado, here's my snippets card for this week, and by pure fluke is also fits the current Less is More challenge, which is 'Repetition': 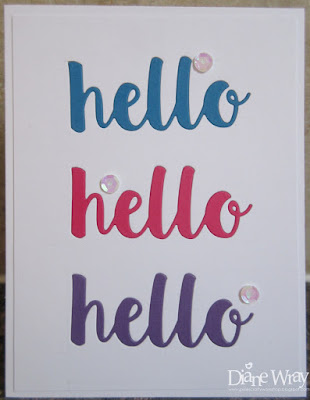 - a slightly smaller white panel for the top layer - but in truth I worked on it while it was a bit bigger. That allowed me to fine tune the measurements and placing of the word 'hello'

- to do that I measured then drew lines across the card very lightly using a soft pencil plus a line down the left hand side to place the word against - the secret to this card is to measure, check, measure and check, along with 'precision'

- then I die cut the word 'hello' three times from the white card, using a die from the MFT Die-namics 'Hello There' set (it also come with the words 'hi' and 'there') - making sure I saved the white die cuts - reason comes later

- next I trimmed the panel to size, just slightly smaller than the card front (evenly on either side and also evenly at top and bottom - remember, the key word is 'precision' when making a card like this as there really is no place to hide). Then added double sided adhesive sheet to the back - which left the apertures with a nice sticky area for inserting the word die cuts

- then die cut the word 'hello' from three  snippets of card (blue, pink and purple) and carefully inserted those into the sticky backed apertures

- glued the panel to the card front

- added three pearlescent sequins using Glossy Accents and called it done (could have placed the sequins better - two close together with one 'loner' would be good, but too late now!)

A tip: the centres of the letters O had dropped out when I removed the die, which was fine as they weren't too fiddly to work with. However, the teensy white centres of the squiggles were still in place so instead of removing them and risking losing them, not to mention how tiny they are to handle anyhow, I tried a new trick - one to remember for the future. Leaving the little piece of die cut in place I carefully lined the white word die cut over the letter 'o' and gently popped the piece downwards into the sticky gap using a pokey tool - removed the white die cut and just rubbed the little piece with my fingernail to make sure it was nicely stuck down.

I love this die set, the words can be varied of course and (for example) could be used individually or (as I did) repeated to add some 'oomph' to a card - possibly using the 'ombre' technique of varying shades of the same colour.

Now for this week's peek at the picks. I'll keep it to three picks, although I could show many more than that. As you know, am trying to limit time spent both crafting and also at the laptop - sitting still isn't good for the back, which is actually improving so it does point to sitting for long periods beavering away at the desk being a lot to blame: 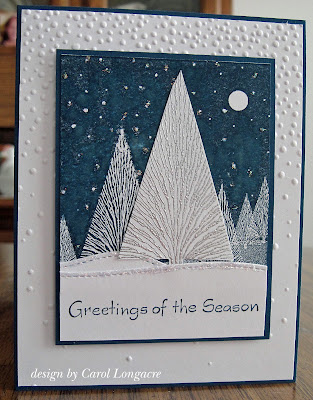 Carol brought this beautiful Christmas card to share with us, plus a second one which you can see over on her blog HERE. I love the clever idea of using the SU 'Softly Falling' embossed panel behind the image panel! And what a stunning scene - love it! 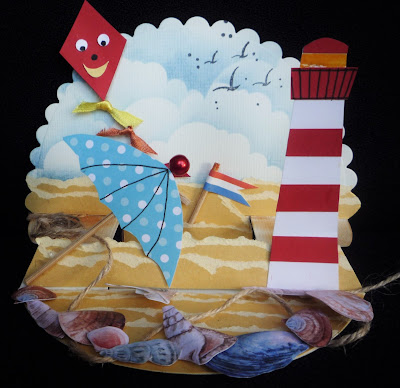 Scenes, especially Summer and beach ones, are really popular right now. I really love this easel card, made by Lia. Lots of lovely snippets used and just look at all the detail - wonderful sand dunes, Lia must have tons of patience! 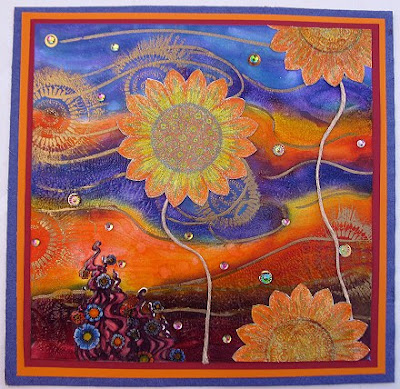 Those of you who've already visited Alice's blog have gone crackers over this fabulous piece of mixed media art. It's just stunning, and another example of how versatile you wonderful girls are. Love, love, love it!

We had one new Playmate this week - and she's very much one of my favourite card makers too. It's Debby of 'A Scrapjourney': 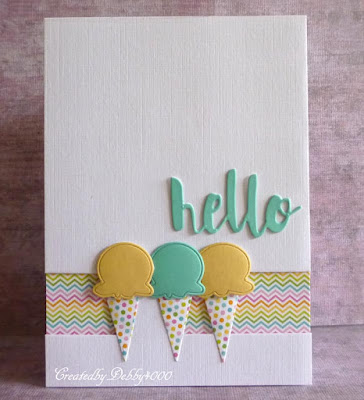 I adore this card, it really says 'Summer' doesn't it - and such clever use of snippets (aren't the little cornets so sweet in spotty paper?!). And look, Debby also used a 'Hello' die on her card, albeit made by a different company! I always find Debby's work really inspirational and her blog is one I really recommend you to check out if haven't done so already. I often refer back in my blog posts to ideas I've picked up from Debby. I just wish I'd had more of the hedgehog stamps that Debby (and many others) really wanted to win this week :(

Maura
Well done Maura, according to my little black book it's been some time since you won a prize (October last year) so this one is probably due to you! I have your address and will post the prize off to you later on this week when I get time to visit the Post Office after the Southampton frolics.

Here's this coming week's prize, which I bet you girlies already guessed: 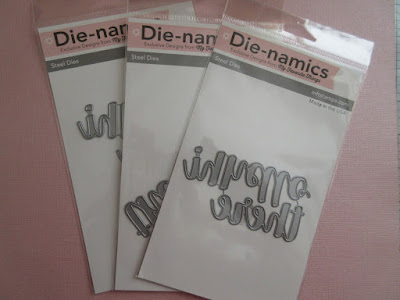 Wait, you can see three sets of dies? How strange, so can I! Which means there are three sets of the same dies on offer so you naturally have three times as much chance of winning this coming week! Still just one entry please.

The Snippets Challenge will run for one week and the Playground gates will close at 11am UK time on Saturday 23rd July. The gates will open again at midnight UK time on the same day.

A maximum of ONE entry and please say in a comment if you wish to play and be a possible winner of the prize. Please also link back to the Playground in your blog post to be eligible for the draw.

Having said that, I'll be in Southampton at the start of this coming week and most likely won't have time to hop in and comment on entries or fix any linking issues until after Wednesday when I'm due back home (no doubt tired, hoarse and very happy). I'll take my Nexus tablet but using it to actually tinker on with the blog or Mr Linky is fraught with pitfalls - easy to cause more problems than you cure I find! I do have a couple of scheduled posts which will appear, one of which is the new Cuttlebug challenge on Tuesday - and it's the last one for a few weeks whilst folk take a Summer break.

But, Parsnip (cheeky little bear) is in charge of the Playground. He initially whined on to come with me then decided that a chap needs to 'keep his air of mystery' - so he's on lookout duty and also keeping Len in check ............. but he can be bribed with sweets/candy I fear. Err, and so can the little white fluffy bear!

Have a grand ole week y'all (practising American for when Darnell hits these shores!).