Lovely challenge over at Less is More this week, especially for those of us with snippets of designer paper to use up!

'Designer paper in a CAS style' is a little more tricky than you might think if you intend to paper piece. You need an image large enough to make a statement, but not too large in case it swamps all that important 'white' space. Initially my card was going to be roughly A6 sized but once I'd paper pieced the image there would have been a lot less white space than I wanted - so this is how I got round it: 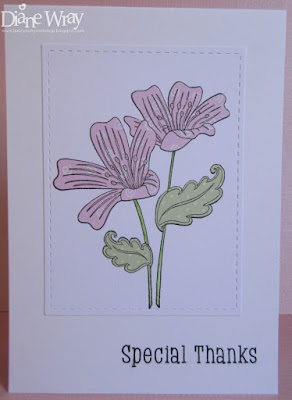 - then paper pieced the leaves and flower heads in place using a glue pen. Always add the glue to the main image, not to the fiddly paper pieces - it's much easier and ensures good cover with no risk of wrinkling your paper pieces. I got that tip from Jules years ago :)

Edit: Sam (Whisper) suggested I link this card into the May challenge over at Penny Black and More, where it's currently 'Anything Goes'. I'm linking, but do feel a bit guilty as this is such a simple rendition compared to the amazing DT cards - albeit using a fabulous PB Stamp :)

That's some beautiful paper piecing, and I love how you kept all the white space untouched at the same time.

Always love a bit of paper piecing Di and the soft pinks look great on the PB image.

Beautiful CAS design Di. Always good to use some of the patterned paper stash that we all have. :) xx

How lovely. The stamp is gorgeous and your paper piecing looks perfect - so incredibly neat and precise. Wow!

Love the delicate appearance of this and the way you managed to add more white space. What a good tip about the glue for paper piecing - one of those ideas you wonder why you didn't think of yourself isn't it!! Must try to remember it next time I paper piece.

Absolutely delightful and we would love to see it over at Penny Black & More this month too, Luv Sam x

Bumping up to a 5x7 was a perfect solution, Di! Very pretty paper piecing!

Very pretty card Di, great save popping it onto a larger base too, Cathy x

We were definitely chanelling the same muse! Love the way you upgraded the card blank. Cara x

Your paperpiecing looks so pretty and sweet, and the stitched frame adds interest to the beautiful flowers. Great CAS!

Simple but very effective Di and lots of lovely white space for the LIM challenge. x

WOAH! What an elegant, CAS beauty Di! Perfect use of your design paper, loads of scrumptious white space and an awesome take on our challenge. Thanks as always for playing along at Less is More. Hugs Sarah x

At first I thought you were pulling our leg about using designer paper but then I saw the paper piecing. A very subtle way to sneak it in! Very nicely done!

Fabulous paper piecing Di, and a very pretty stamp.Great idea to use a bigger base card.
Jean x

Oh, Di, this is lovely. Such a beautiful stamp and your paper piecing looks fantastic. Lovely CAS card.
Thanks for sharing with us.
Anita x
Less is More

What is it they say "two great minds think alike" and we won't bother with the rest of it.
Did mine yesterday, very similar to yours and mine is also for the Playground and I have hummed and arred about PB & more but what the heck, I may throw my hand in as well.

Fab card, loving your stitched detail on the matt !

Di I love this image and really must look out for it or order it from my favorite craft store. Also love how you have made it CAS looks so elegant.
Hugs
Margaret M

It's a stunning CAS card Di and even better IRL. Love the super paper piecing xx

Pretty paper piecing! Thanks for sharing at Less is More!

Way to "make it work." Great way to get the patterned paper in while keeping it CAS, too!

Just perfect Di... so clean and fresh!
Thanks so much
Chrissie
"Less is More"

Fabulous and so pretty card.
Thank you for sharing over at Penny Black and more;-))m

A lovely CAS and elegant card Di.
Thank you for sharing at Penny Black & More May challenge and good luck x Susan x