It was a new one on me when I came across folk referring to 50th Birthdays as Hawaiian, as in 'Hawaii Five-O' :) It tickled me so much that when a pal of mine had her 50th Birthday recently, I just couldn't get the idea out of my head.

This turned out to be one of those great ideas that takes forever to measure, fiddle around with and make, but dogged stupidity determination kept me going - and this was the result- the best I could do: 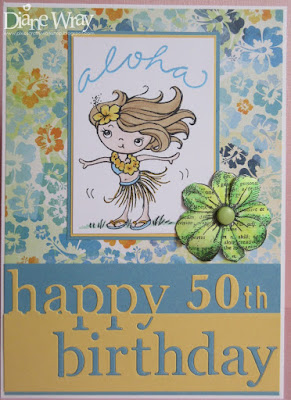 - 5" x 7" white card blank, tent style (in fact, I had to cut the card blank marginally larger so that the white border would be there, as well as the die cut 'Happy Birthday' fitting properly as it's probably better suited to a 6" width card)

- the image is a Stampendous cling stamp called 'Hula Kiddo', stamped with Memento 'Tuxedo Black' ink and then the word 'aloha' stamped using a Denami Design stamp (no name) and Memento Brilliance' Sky Blue' ink (me not daft, did all the stamping first before colouring!)

- coloured the image using Pro markers, plus a Whispers pen for the fine lines of the grass skirt - then set aside it whilst I fiddle faddled around with the main body of the card front

- first I die cut the 'Happy Birthday' using the Memory Box 'Grand Happy Birthday' die and a snippet of yellow card (SU's 'So Saffron'), which was backed with Stick It adhesive sheet

- I remembered seeing Kath inlaying the 'lower line' letters in a Christmas card the other week and thought it gave a really nice finish so I backed a little snippet of the blue card with Stick It and die cut the word 'birthday' again so I could copy her :)

- next, very carefully, trimmed the greeting panel at either end along with the patterned paper, which is from Bo Bunny's 'Barefoot and Bliss' paper pad, to exactly the same width and glued them to the front of the card blank

- the image layer almost had me stumped earlier on in the process when trying out the bits and bobs to see if they would work. I tried every single die set I possess to get the best match and also to leave a decent amount of the floral backing paper visible. Lots of whistling and looking at the ceiling for inspiration - in the end I plumped just to trim the image into a rectangle then layer it onto slightly bigger pieces of yellow and blue card

- rummaged through a box of flowers and found absolutely what I wanted, a lime green flower (with the writing already on it, cool) through which I poked a brad - then glued the flower in place using hot glue gun. Burnt finger in process :(

- took envelope for 5" x 7" card out of the (one of many) envelope boxes and thought, let's try this for size to be sure. Card did go into envelope, but refused to come back out without ripping envelope apart - whaaaaaaaaat?!

- had a final lie down, due to the stress

Pssssst, I was out and about most of yesterday so if I haven't nipped over to check out your Playground entry yet I'll be there soon!

Lovely card Di, I have never heard of that idea!!lol

A great card Di and I've not come across the term Hawaiian before!
Kath x

Well, I happen to know the recipient absolutely adored the card, so it was worth all that stress, honest! Perhaps you should go have another lie down to make sure you're fully recovered though!

It's brilliant. She's so pretty and I love the little flower. Barbxx

This is a beauty so definitely worth all the stress Di and I love the bp and the image is so cute and fantastic for a fiftieth birthday. I hope you are feeling calmer now ....lol. x

She is adorable in her little grass skirt. I will now have that theme song stuck in my noggin all day. :)

Oh, this is so cute and fun!! Love this Hawaiian girl, and you have made a fab work with the sentiment, love the positive/negative effect! Amazing background and beautiful flower,too, it adds a so pretty look!

Brilliant, even if it did almost cause you to have a nervous breakdown! Cara x

This is a super 50th card Di. Love those colours and all the effort (and lie downs) you put into it was well worth it.... good job you didn't have a glass of something each time! xx

Fab card, Di, worth all the effort of your labour of love. Hope you rewarded yourself with a large glass of something after your final lie down. :-) Xx

Love the little dancer! Not exactly the weather for grass skirts yet but it is starting to heat up!

What a fabulous card, love the image and the choice of colour and the fabulous papers.
Must admit I didn't know what they were on about when I first heard of the Hawaiian birthday.

Hula, ah hula baby hula!! (as Elvis would sing it) Such a cute idea for a card, and although we have the tv show Hawaii Five-0 I never made the connection for a birthday card! Cute stuff Miss Di :)

What a lot of lying down! It was worth all the stress though, a brilliant card. I'd never heard of 50 being a Hawaiian birthday, pity it's 10 years too late for me to have one!
Jane

This was worth all the fiddling, Di! It's a perfect Hawaii 50 card! And I have that hb die and have never realized that a number fits perfectly in that space! Smack! Thank you for that!! Hugs, Darnell