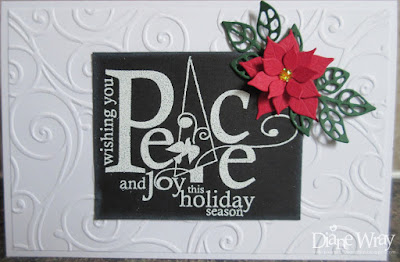 Gorgeous card!!!! Love the embossing and that tiny poinsettia die (I did finally order that too!). Lovely chalkboard technique.
I did see Sarn's post today. Too much fun!
Lynn

Absolutely gorgeous! I've still not tried the chalkboard technique, and I have a roll of NBUS chalkboard finish vinyl just screaming to be used. Really must try it
jane

A great chalkboard card - love that sentiment too.
Kath x

And I deny it all, whatever you heard is wrong !

Oh now this really is a work of art Di. I love EVERYTHING about it. Colours, texture, embellishments.

Gorgous card, so stylish! I have never try with chalckboard cards. Your panel looks really well on the embossed back! Lovely poinsettia, too!

Wow Di, Go straight to the top of the class. No detensun for you. Us lot will be pulling our hair out trying to do this card now. I'd just like to clarify that I had nout with a capital K to do with the pancakes. Might have eaten a few on the side lines. Hugs Mrs A.

This is very pretty Di and I love the poinsettia and filigree leaves and swirls embossing in the background. I have never done a chalkboard card before so must give it a try. x

Your chalkboard is far too clean! You need to mess that thing up a bit. Or perhaps you've had all the naughty kids cleaning and cleaning it. Seriously though love your crisp clean chalkboard!!!

Hi PJ! You didn't have my senior school maths teacher - she would have thought this a real mess! Mind you, she did wear twin sets and always, but always, a strand of pearls!

LOL, Sounds like a wild time at the Playground this week! I love your clean chalkboard! And this is one of my favorite sentiments! Wish I'd thought to use it. So glad to see you at Merry Monday!

This is beautiful, Di! One of my favorite chalkboard cards!

Just remembered during the night - her name was Miss Pratt :)

A gorgeous chalkboard card - another technique I've yet to try! Love the stamp, looks fab in white. The addition of the beautiful poinsettia and skeleton leaves is a just perfect. x

Love the way the black and white go together an highlight the red poinsettia.

Wonderful card Di and a fabulous stamp. Looks super against the embossed background.

As for the pancake race - don't believe everything Parsnip tells you, I promise we were all very well behaved xx

Beautiful chalkboard card. Thank you for joining us this week at Merry Monday.

Beautiful...love the chalkboard look myself and that Poinsettia is gorgeous!!

That is a lovely card and particularly like the sentiment, it's a nice design

This really popped out at me in the Merry Monday pool, Di! Just love your chalkboard sentiment with the sweet die cut poinsettias!!

Wow, what an amazing sentiment - on a gorgeous card!

Wonderful sentiment, Thank you for playing along with Merry Monday.

I am drooling over this stunning card. The chalkboard sentiment is divine and your embossed mat looks fab!

Hi, Di! Usually I am stopping by to play in the snippets challenge, but today I have my DT hat on. This card is very cute! I love the chalkboard technique and your sentiment IS perfect for it. Beautiful little poinsettia, too. Thanks for playing with CHNCC2. (Sorry I'm so late in commenting)