So, I began with the letter P as my starting point - and this was the result - presents/parcels: 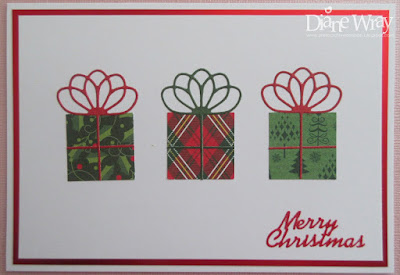 - snippet of red satin mirri card, cut a tad smaller than the card front and glued in place

- snippet of white card, cut a tad smaller again and glued in place on top of the red layer

- plain snippets from the same paper pad, backed with Stick-It adhesive sheet and then die cut using a die from the Memory Box 'Crisp Bows' set - to form the 'ribbon and bows' on the parcels which were assembled and put to one side

- next, a red peel off sentiment - had totally forgotten I had a sheet of red ones!

- then I added the assembled parcel with their bows - best done at the end when the sentiment peel off is in place just to make sure the balance is right (or as right as it ever would be if I'm behind the making!)

I made some cards in a similar style for last Christmas, although they were bright neon colours and much more modern/funky - HERE.

And, of course, I made another one exactly the same as the one I showed at the top of this post - which means I've hit my target for September of 12 Christmas cards - so that makes 108 made so far this year. Whoop, whoop!