I've wanted to make a 'Minions' Birthday card for ages now, using the Stampin' Up Owl punch. Recently I got the chance to make one for one of Len's little relatives - and they really are such fun to make, if a little fiddly!

This is so NOT my idea by any means, there are loads of Minions cards out there and we've had some fun ones in the Playground for sure. THIS is where I found some clear and easy to follow instructions using the SU owl punch (which was my mission!), along with photos of the stages. And this was the resulting card 'wot I made' - with huge thanks to Trisha for the really clear instructions: 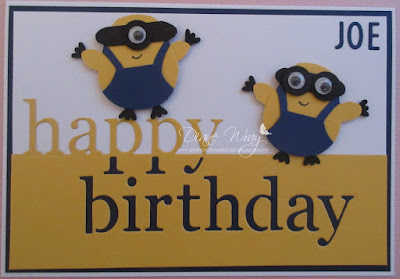 - a snippet of dark blue paper as a frame

- a panel of white card

- only at that point did I stick the yellow sentiment layer, with lower part backed with the dark blue paper, to the panel of white card and trim it down to sit on top of the dark blue frame leaving a narrow border right round

- the cheeky little Minions were made by following the instructions here (as mentioned earlier) and using snippets of yellow, black and dark blue card - plus some large googly eyes

I used some words I'd seen whilst looking for the Minions tutorial, just printed them on the insert .................. 'Sending you Minions of Birthday Wishes'.