Hopefully all is well back at the Playground and I won't return tomorrow night to find that Parsnip has been terrified out of his fluffy white fur.

No snippets card from me, but there is the chance to win a stamp set: 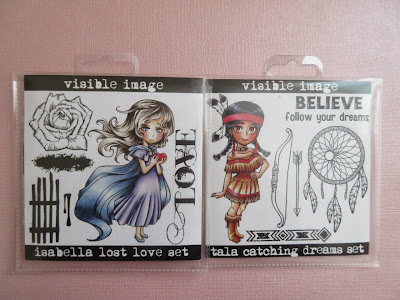 They were donated to the toy box by our lovely playmate Viv. Made by Visible Image and they've never been opened (I think Viv won them), although it's only fair to say that they did sit on a shelf in Viv's craft room for a while and the light has turned them very slightly yellow. That doesn't detract from the quality of the stamps and at £11.99 a set I think they're worth throwing your hat in the ring!

All you need to do is to have entered at least one card/snippets make into the Snippets Playgound - and also leave me a comment on this post, saying you'd like to be in with a chance for a runner-up prize.

I'm offering them separately to spread out the chances, so in fact it's two prizes. If you only specifically fancy one or the other (Isabella or Tala) then please say so as well. Otherwise I'll assume that either one would be fine.