The current challenge over at Craftyhazelnut's Christmas Challenge is 'Vintage or Shabby Chic'. Hmm, there was a bit of pondering here for a while and then I came up with this: 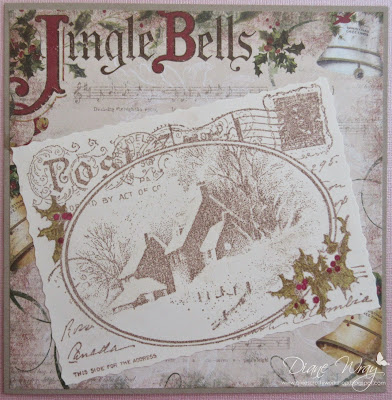 I'm pleased to report that I did manage to track down some additional spare blades for the trimmer as well as some extra cutting mats to slot in the blade channel - just took a bit of good old Percy Veerance :)

And as is often the case, I made an additional card exactly the same whilst at it.

This is also for Craftyhazelnut's Christmas Challenge Extra for May, where it's always 'anything goes'.

Uncle Charlie's funeral went well on Friday and was indeed more of a celebration of a long and full life. Remember that I mentioned he was a POW in World War II? And was a  captive for almost five years?

Well, we discovered from the family that he and his wife very recently had to go into a nursing home - after Charlie had a minor stroke and couldn't continue to look after his beloved wife Jessie at home. Within a very short time, Uncle Charlie plotted their bid for freedom and they were caught trying to 'escape' through the kitchen which had a back door to the outside world - the rotten postman snitched on them!