And 'The Beast From The East' is trying to hit us once again here in the UK. So far we've just had snow flurries but we did plan ahead and stocked up with food in Friday just in case. So at least we can stay at home warm and cosy if we do get a huge fall of snow.

I had great fun making my snippets card for the coming fortnight's challenge, so much so that I ended up making three cards at the same time. Here's the first one, at his insistence. It's little Parsnip! 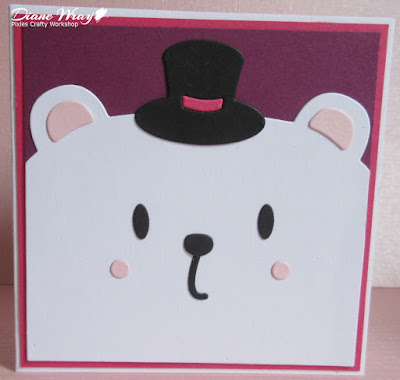 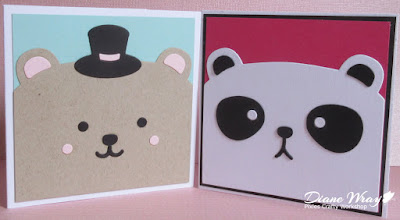 - plenty of snippets, not one fresh piece of card was cut into for the bears and the backing layers

- then cut a contrasting background in a 3.25" x 3.25" square, which is exactly the same size as the width of the bear's face

- glued the bear faces to the backing squares, and in two instances then backed those squares with a further narrow 'frame' of contrasting card

- then cut out all the pieces needed for the features, ears and hats - keeping them in little pots as I went, one for each bear (I use the upturned clear plastic lids from those round tubs of cotton buds - so useful for all sorts of things!)

- and it was just a matter of sticking the little contrasting bands into the  apertures in the top hats (tiny piece of red line tape behind worked a treat) and using a medium, as well as a very fine, glue pen to adhere the rest of the features in place

- I didn't run the bears through the Cuttlebug as I would normally do - lest I ended up with a crease across the top hats as they overlap a layer of card, plus I'd used glue rather than Stick-It sheet

First of all, this set of dies is made with the Mama Elephant 'Favour Bag' in mind - it's a lovely die but quite expensive at £36. It was unavailable for ages, and in a way that's as well 'cos I decided that I really wouldn't be making loads of favour bags anytime soon. But, I so loved the matching sets of dies, which work well on cards - make a taller card and you can add a sentiment of course.

I chose the bear set, because of little Parsnip - and I do like the fact that it also comes with dies to make a panda face, different mouths, a muzzle and eyes - and even a very splendid handlebar moustache! I cut some round pink eye shapes to add as 'cheeks' as I'd seen that on line as an idea and thought it looked cute! I really can see this set being used for little cards from the Playground/Parsnip, Christmas (add a little die cut of holly to the hat), Valentine's Day (add a little heart to the hat), same for St. Patricks's Day (make a shamrock using tiny hearts) - the list goes on.

There are other die sets available as well - the favour bag of course (which will go through a Cuttlebug), a bunny, a cat (which I know lots of you cat lovers would adore) and Halloween - all with the straight sides. Plus other sets without the straight sides for Christmas, a dog, Valentine's Day and so on. Just take a look over at Mama Elephant HERE. And I have no connection to Mama Elephant - I just think they came up with a cracking idea! 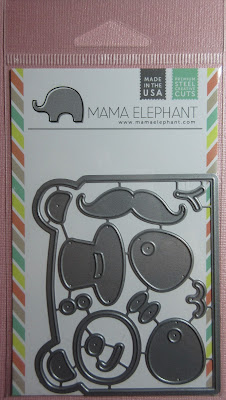 I know! You might be gawping at this Mama Elephant 'Favour Bag Accessory - Bear' die set - just like I used for my cards above - and be thinking it's way too fiddly and complicated to use. Not at all I promise - it's quite therapeutic. I used my craft wire clippers to separate all the pieces and they're now stored as usual on a magnetic sheet in a file. The A4 magnetic sheets are stored inside heavy duty plastic pockets - and, behind the magnetic sheet (which holds several other dies and die sets) I slipped a copy of this little guide, which can be found on the Mama Elephant website: It shows which piece is which and also some samples of the ways they can be used to create your very own little bears :) I've printed off a further copy, which will be enclosed with the prize when it's sent to whoever is the winner this fortnight.

As always, the Snippets Challenge will run for two weeks and the Playground gates will close at 11am UK time on Saturday 31st March. The gates will open again at midnight UK time on the same day.

Be sure to call back next week to see the winners of last fortnight's 'Concord and 9th 'Sprinkles' Turnabout stamp set. Plus a Guest Designer and fortnightly picks of course.

Love from Parsnip - who quite openly says the card depicting him is the best of the lot! He's very glad he didn't end up with the slightly serious mouth of the panda and to be too 'smiley' reduces the enigmatic cloak he likes to keep around himself - he really is a vain little toad at times :) And love of course from me,