Well, what a week for weather here in the UK! Some of you suffered quite badly, some were just middle of the road like us and others barely saw more than just a sprinkling of snow. We were pretty much locked in here for a couple of days as we live quite high up in Hampshire and also on a sloping and reasonably steep road. Of course, there will always be those who venture out regardless (perhaps through need rather than desire I must admit) and quite a few cars were literally just sliding back down the hill.

Anyhow, today (Saturday) has seen a dramatic lift in temperature and thankfully the snow is rapidly melting.

Enough of the weather - let's move onto Playground stuff.

I'd been eyeing up the Concord and 9th 'Turnabout' stamps for ages and finally took the plunge a few weeks ago. Of course, then it was a case of choosing which design to go for. I figured that the new 'Sprinkles' set of stamps would be good fun and it could also be used at Christmas time to make card backgrounds in Christmassy colours. 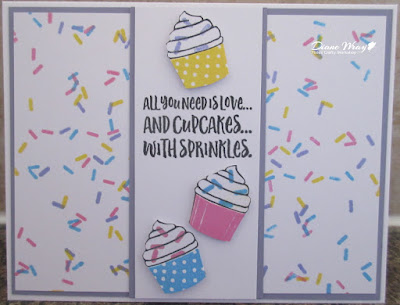 - the first thing was to stamp the 'Sprinkles' background using the main 'Turnaround' stamp. I subsequently found several videos about using these stamp sets and, IMHO, this is the best one so far, produced by Hedgehog Hollow. Even better than Jennifer McGuire's videos about using the Turnabout stamps and that's really saying something as I'm a huge fan of hers! I think the Hedgehog Hollow video scored higher marks for its clarity rather than galloping a bit - as well as the idea of laminating the 'grid'. That isn't essential but I like that it would then make it wipe clean

- of course, if you haven't come across these stamp sets then you'll be wondering what on earth I'm on about. It's too complicated to explain quickly - but suffice it to say that the principle is generally the same - using a background stamp you stamp in one colour (using the Misti for ease), then do a quarter turn of the piece of card leaving the stamp on the lid. Clean the stamp and ink it using a different colour before stamping again. You can do this for all four 'turns' and build up as busy a background as you wish - or just do it twice for 'less is more'. The really important part is finding and marking the centre of the stamp itself before placing it onto the Misti - my card isn't absolutely right but it's very close and next time I now know (from the Hedgehog Hollow video) exactly how to set the stamp up. So easy ....... when you know how!

- layered the cupcake cases onto the cupcake outlines using a glue pen - and also checked that they would fit onto the sentiment panel once it was trimmed down!

- lastly, added the little cupcakes to the sentiment panel using this sticky pads to add some dimension

This stamp set was such fun to use and such a clever idea by Concord and 9th as well. The designs are growing and many of you will have at least spotted the triangles stamp on your travels around Blogland. I would certainly buy more stamps in the series now that I know all the little hints and tips :) 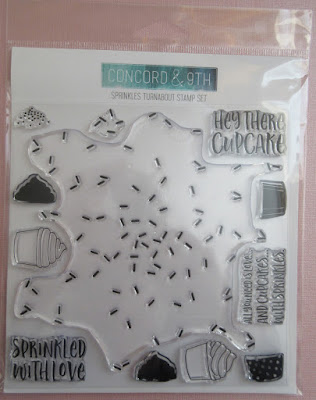 Of course, it's a set exactly the same as the Concord and 9th 'Sprinkles' Turnaround stamp set I used today! Ha, if you like I'll also add in some white snippets :)

As always, the Snippets Challenge will run for two weeks and the Playground gates will close at 11am UK time on Saturday 17th March. The gates will open again at midnight UK time on the same day.

Be sure to call back next week to see the winners of last fortnight's 'Sugar Pea 'Home Sweet Home' die and the matching Sweet Pea Sweet Sentiments 'Home' stamp set.

Parsnip's latest calamity adventure was helping me to clean the different stamps as I was making this card - thank goodness for the Shammy as there is a fair bit of stamp cleaning to do along the way. Of course, he demanded payment in choklit! However, I have absolutely no idea how a little white bear could end up with yellow ink inside his ear as well as sky blue underneath his chin. I think he must have had a couple of itches and forgotten the dangers of scratching oneself whilst having inky paws. I didn't look any further, for fear of where else on his fluffy little white body he might have been spreading the stuff - I shudder to think!