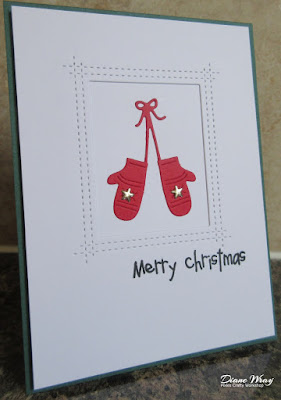 Simply beautiful...I love, love this card, it is so pretty and festive!! I need to make a few holiday cards to get ahead!! Funny it is already the 14th there, it is 8:27pm on Thursday here yet...kind of thru me for a minute..lol!!

Mittens on Christmas cards is very classic here, Di, so I truly get and love this design! Yet another fantastic use of that p-a-b die!! I think this is the best one yet and well done getting the most use of the schtuff while you had the schtuff out!! I'm delighted that the new format has made your life less stressful! Enjoy the holiday weekend!! Hugs, Darnell

Oh Didi, how gorgeous, I neeed oh so neeeed to get mine done tooo, love this... have a happy Easter God blessed in every way. Hugs Shaz in Oz.x

This is really lovely, perfectly CAS and strikingly elegant. Tell He Who Must Be Ignored that as a parent and grandparent the ought to *totally* get the mittens!
So glad you are finding the playground easier now, I know from when I helped out that it's a massive amount of work, and with so many different styles and techniques, a generic "copy and paste" comment just wouldn't work. Not that it's my way of commenting - if I ever do one it's probably because I have a temperature of 104 and ought to be in bed!
Jane

Well done you on getting any Christmas cards made this early Di, this one has a lovely crisp elegant feel. So please you are finding the Playground more manageable now and equally pleased you came up with a solution that works for you.

Hi Di this is a gorgeous Christmas card. I made a few Christmas cards the other day I hate the scrabble at the end of the year. Take care. Hugs Jackie

Oops I call my sister Di, Didi, and went into automatic mode.. see all best folks are called Di. 😁
Shaz.x

Beautiful Di, I love those gorgeous mitts. I like to make an ammount of cards for Christmas per month, as you say it's so much easier in the long run.

I answer to anything Shaz! :) x

Super card Di and such a great cas design. Well done on getting ahead with the christmas cards... It'll no doubt be a last minute panic for me. Have a great easter and tell Parsnip he has to share his choccie eggs xx

Ha, fat chance! The little pig is already guarding them, armed with a water pistol! xx

I love these cute mittens Di and mittens and suchlike are definitely things we would be wearing here at Christmastime. I love the peek-a-boo window and the little nailheads stars on them too. x

That looks like a great card for 'batch baking' just love the little red mittens. Have a good Easter break and I'm so pleased the fortnightly challenge idea is working out well for you.

Fabulous minimalistic card Di and I love the little stars...just finish it off! Happy Easter to you!

You have used again this amazing frame die in a so pretty way! Love how this CAS turned out! Love also so much the red mittens with the gold star, so sweet and cute! And having six of them ready for Christmas is a good thing!
Happy Easter!

Sweet card Di. I have to be in the mood for making Christmas cards and find that happens nearer The big day!

Hello Di! Yes I am back in the cold and wet - unfortunately! Mr Mojo is still sunning himself somewhere so have no ofeering for anything at the mo...
But I real;y like this card! Cute mittens and perfect for Christmas
What do men know???? LOL x

This is a superb card, both LIM and CAS but are they not the same thing, the red really looks brilliant against all the white. Need to go to Specsaver though as at first I thought it said Melty Christmas and I thought where is the snowman, oh it must have melted, then peering at the screen realised it was merry.
Happy Easter my lovely friend. Oh and I was 20.

Fab Xmas card. I love the pop of red mittens - what's not to love, hmmm Len?

Fabulous card, crisp and clean. Love the mittens. Think I need to buy some for next winter, I have an issue with gloves. I have the worlds shortest little fingers. I can literally fold the finger of a glove in half due to where they come up to. One of my friends nearly wet herself in a shop when I showed her! Have a great Easter. Cara x

So funny Cara! It doesn't stop your lovely card making though :) xx

This goes back a while, but I do want to express my thanks for the cute prize I just received - and a special thanks to you for going above and beyond to make sure I got my cute prize. The cat stamp and the Window die will both be great to use - I hope to have time to play around with them later today! Thank you again so much - and good luck to all the challenge entrants!

I love this card. I FINALLY just purchased a pair of mittens at the end of Christmas. I'm always on the late end. The stars in the middle are cute.

Hi Di, l love your batch of cards and don't find them boring at all this one is gorgeous love the image and the edged stiching always is a favourite of mine .....sending lots of love and hope you have a lovely easter weekend x

I'm so behind in my commenting Di, so please forgive me for being late to the table! Life, it just gets in the way at times. lol I have been doing fairly well with my Christmas card resolution, but I do have one month I need to make up for. Will do that I hope this month! Although this month is zooming by at warp speed! Your card is lovely and I love that you mass produced it! It's what we need to do and nothing wrong with it either. You have inspired me to do something similar as I have a mittens die that this design would work well with and skates, so might have to CASE you!! Hugs, Brenda