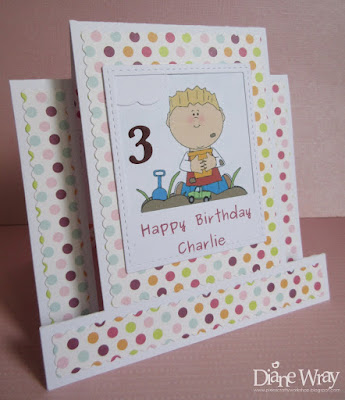 Well gosh golly gee - I have your birthday written down and completely forgot to wish you a happy one. It's still the 12th here in the states, so I'm not too awfully late, although according to your time across the pond - it's already over and done with! HAPPY BIRTHDAY!!! I hope it was fun, and having dear friends stopping by is probably just what the doctor ordered! Cute card for a 3 yr old and again - I hope your birthday was a very special one :)

Sorry I missed your birthday Di, sounds like you have been rather spoilt!

So glad to hear you had a lovely celebration of your born day, Di! No one deserves it more and kudos to Len! I think your card for Charlie is just the best ever and I loved every word of your describing the two brothers playing in their "construction site" so harmoniously!! Enjoy the rest of the week and keep on celebrating!! Love and hugs, Darnell

Very sweet card, he will love it! And thanks for the link to the clip art site, lots of really useful images there, definitely one to bookmark
Jane

Belated Happy Birthday - good to hear you are well and enjoying your birthday week.

Belated Happy Birthday Di, so sorry I missed it but had no idea.

It sounds as though you've been enjoying a lovely few days and Len has spoilt you for your birthday!
Brilliant card, so I'm going to pop over to My Cute Graphics, as I love this image!
Janice x

Cor, that's just a perfect card for little Charlie isn't it?
Is it a New World Order . . . you OBEYING Len!? Whatever next! LOL! Glad you had a great day.

Belated Birthday wishes Di, hope you had a super day. I love your card, just right for someone little person who loves to dig in the garden.

That is such an appropriate image for the little chap you described - love it. Belated birthday wishes, pleased to hear you had a good day.

Glad you had a nice relaxing time yesterday for your Birthday. Weather wasn't up to much was it but made up for it today. Rock solid sunshine and blue skies overhead .Sitting in the garden doing a spot of lavender painting. Just waiting for it to dry and then I can do the other end of it.!! The Doc is doung a spell of caring for the sick and needy. Will send you an email but I will wait till the Avalanche is over. Hugs Me.
Internet on the blink again.

Belated Happy Birthday to you Di! Glad you had a nice day! Your card is very cute and sounds very apt for the little recipient....bet he was thrilled.

Oh Di, I'm so sorry I missed your birthday so sending belated birthday wishes and glad to hear you had a lovely day. I'm a little preoccupied at the moment - still can't get enough of being a granny and I'm cursing the days for passing so quickly.
Love your card for Charlie and such a super image. Will have to give that link a check out xx

So sorry I didn't realise it was your birthday Di but belated wishes and glad you had a good time. I love this cute little chap you found and the step card makes it just that bit different. I'm sure Charlie thought it was great. x

What a cute card and a cute story. When we get older gardening is the only acceptable way to play in the dirt. Too bad too, cuz just being a kid again sounds fun!

Belated happy birthday wishes to you .. .. it sounds like you had a wonderful time celebrating!

Have a good week.

Hello Di, Just dropping in to wish you belated happy birthday wishes. The card is beautiful, and I like the image. Lynn x

lovely card and great design!
and belated happy birthday wishes to you :)
hugs