Over in Germany, two little girls are absolutely crackers about the film 'Frozen' and anything remotely linked. Their Birthday gifts from us are 'Frozen' related - and I also sent a box full of 'Frozen' themed disposable party plates, cups, napkins, cake toppers, party bags etc. to cover both their Birthday parties - they are only a couple of weeks apart. At least Mum can just whisk the disposable stuff into a bin bag after each of the parties :)

At aged seven (a week ago today), Mia is absolutely enthralled with Elsa which meant that making this card was a no-brainer - Elsa would be in charge: 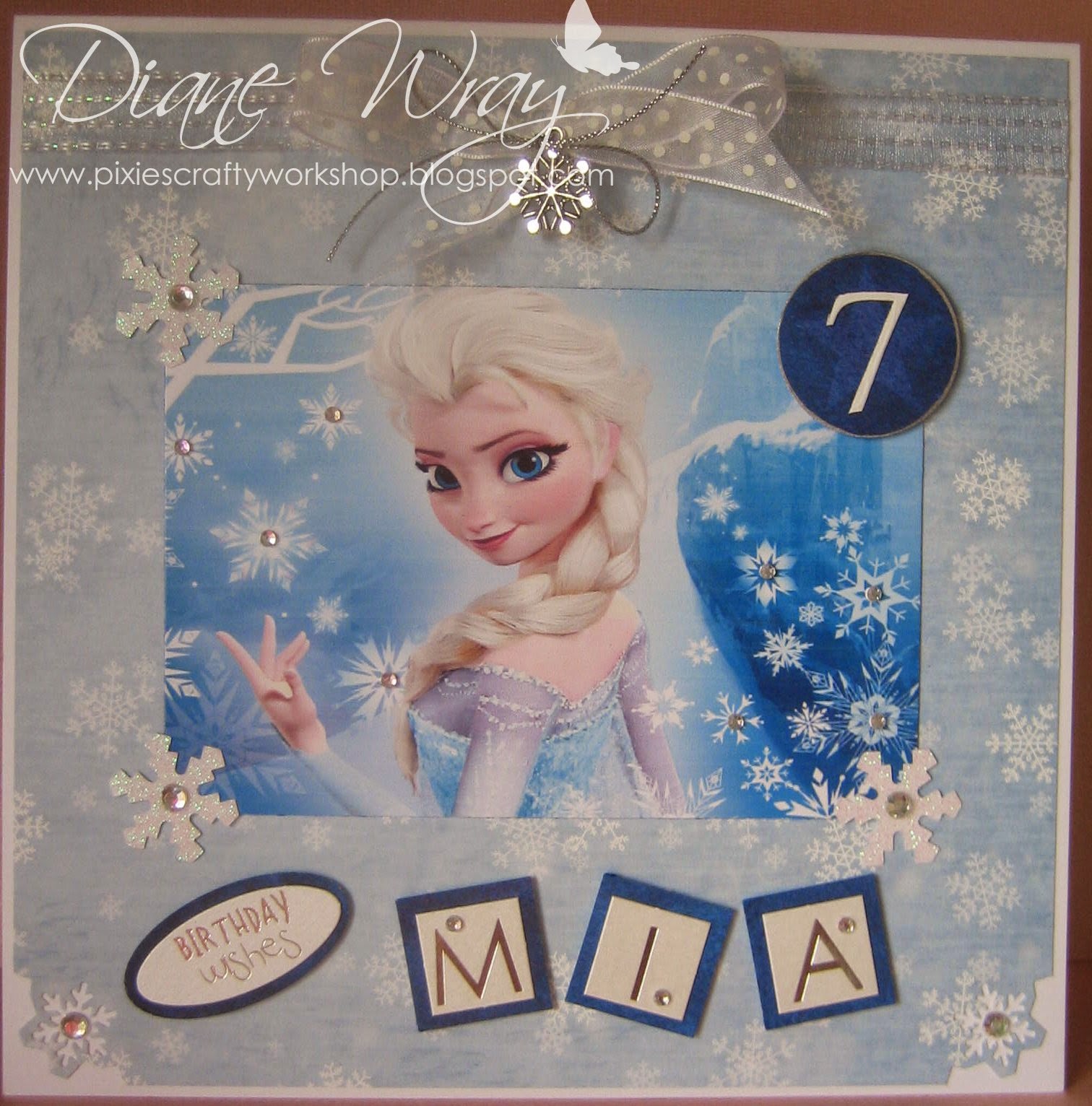 - the image of Elsa came from the internet, there are loads to be found with no copyright issues, including Disney ones such as this one - just Google and be amazed! Printed it onto photographic card, trimmed to size and added a few small aurora borealis gems to the image (as you do)

- Sarn to the rescue, I used a die cut number 7 she sent me a while back and popped it onto a punched circle of navy card which I just edged using a silver calligraphy pen

- the 'Birthday Wishes' sentiment is by Craftwork Cards, popped onto a punched oval of navy card

Although the in-house critic gave this a huge thumbs up - I suspect he doesn't realise that it's always so much harder to make a card to a specific theme, especially including some personalisation. But, he did refer to me as a 'Fairy Godmother' later on when I was clearing up the mess from making this card, so maybe he knows there was a bit of magic used :)

The feedback from Mia? She absolutely loved this card - nice to know it was a hit :)

Of course Mia loved this card! Jack would love it too. Girls and boys are crazy about this movie around here. Pop and I are pretty fond of it too. It's a great movie and some beautiful music! Your embellishments are so perfect. It's as if Elsa cast her spell on the card!

I'm not surprised that Mia loved her card. It's perfect for someone who loves Frozen. I know what you mean about making a card to a specific theme. It always seems harder to make. xx

TFS for sharing this card with Us! looks amazing and so pretty.
cheers
bibiana
challenge at my blog: "Throwback Thursday". Check it out!

That's just gorgeous Di. Our little Lexi loves frozen too...to the point that first thing on a Monday morning I am expected to put her hair up like either Elsa or Anna in the 5 mins we have to get ready to go to pre school :-)
As I always say....I like a challenge!
Hugs,
Annie x

Aww what a gorgeous card! Love the snowflakes and the pretty ribbon and charm to finish!
Lucy x

Who could fail to love this card, especially Mia? It is gorgeous. You will need nos. 4 and 9 for Sandra and I next year!! Even Mr Hettie liked the film! I think the great music helped.
Hugs
xx

This is so precious. I bet it was a bit hit with her. You did a perfect job using the image from the internet. So pretty.

I can see why Mia loved her card. I watched the film at one of our boys´house when we were over, and I thought it was quite good and the song is very catchy. There are certainly plenty of images around, and the one you chose was sure to be a hit. Lots of nice little embellishments to make it your own too. Kate x

Hi Di,aka Fairy Godmother, lol.
fabulous card, and no wonder she loved it.
I don't think there is a child who isn't enthralled with that film, or should I say female child.
Lots of crafty love. Jenny L.

This is a gorgeous card for your granddaughter Di. I'm afraid that having no grandchildren 'Frozen' has passed me by but the image is certainly adorably princess-like and the colours are really pretty, and I can see why she loved it. x

How could she not love this card when it's her favorite character? The idea of matching party supplies is such a thoughtful way to send love as well! You truly are a great fairy godmother :)

Fab card and nice that your effort was appreciated. Great idea to send the disposable party ware. Hugs mrs A.

Hi Di, Mia truly loves her birthday card and I must admit this time the photo of it is miles apart from the real one ... it is marvelous!!! Also the party was a hit with all the FROZEN stuff :o))
And big thumbs up from me on tidying up afterwards. Livi is pretty excited about her birthday card ... me too ;o)