Just the beginnings of a card I have in mind on my desk today left from the other day: 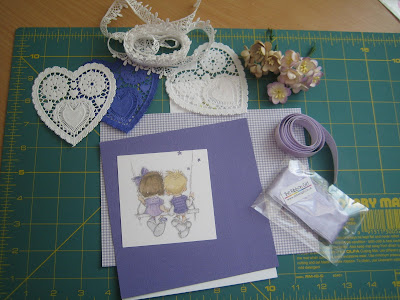 I tend to gather all the bits together before colouring an image - although this one is a LOTV Cute Square. But, I had to abandon any thoughts of crafting and run off to plant these up to hang on the wall beside our front door:﻿ 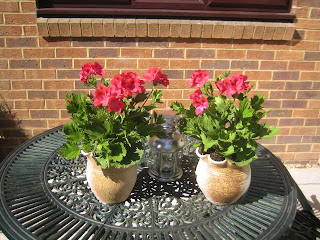 The little garden tea light holder/lantern came from Ikea and it's really sweet in the late evenings. We've had the wall pots for donkeys years - bought from a pottery in Yorkshire. My next outside job is to give the wrought iron garden furniture a good old clean and a fresh coat of dark green Hammerite. Of course I like the hammered effect one which is a long and messy 'do it by hand' task rather than using a spray. I usually end up with as much on me as anywhere else! This is one of the tubs I planted up about a week ago - settled in nicely and growing at a rate of knots already: 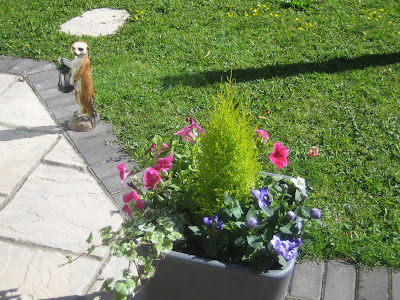 ﻿
I don't go for slightly quirky garden ornaments but this Meerkat is soooo cute. Morrisons had them in last year and they sold out in double quick time. I spotted they had them again last week and just had to give one a home :) He's now called Sergei and his little lantern is solar powered so it glows at night. The buttercups in the lawn are deliberate - my beloved hates cutting them down and the bees just love them.

So, my craft room is a bit neglected at the moment. But, if you want to have a good nosy at what everyone else is up to - go to Julia's here! ﻿

And, it isn't long until WOYWW PiF next week. I'm still not sure if I'll be able to join in - a lot going on here over the next couple of weeks but I might just find some time as it sounds a lot of fun and I'm already working on something. I'm over the fretting if it's good enough, Julia's words are right, if it's made to please then it's always good enough. My problem is I might end up sending the remainder of the crafty bits and a little note saying, 'here y'are - finish it off now'!!

Have a happy WOYWW - I'll try to hop round later, with a bit of luck and a following wind.

Thursday edit: I'm finding that I can't leave comments on a few blogs - can't work out a common thread so I gave up yesterday as you don't find out until you've gone right through the process and are trying to publish your comment.Time to try again today!

Ooh interesting pictures Di. Fancy having a Meerkat in your garden! Nutter!

Try not to get any Hammerite on you cards!

Hugs, Sandra Take a peek at MY DESK here

Those lacy hearts are so beautiful, really special. Thank you for sharing your garden pictures with us, especially your little meerkat. He is very cute.

Love Sergei, how cute is he. I smile every time at the advert, along with the 'kitties with thumbs' too! Softie that I am. Looking forward to this PIF, must check what it's all about. Karen x

Lovely garden Di. Will try to link after you next week so I can finish off you PIF for you :-)
A x

Your flowers are so pretty and I just love that little lantern from Ikea. Sergei, how cute. I can see why you needed to give him a home. Happy WOYWW ;)

Love your pics of Sergei! Great desk to share, hope you get time to join the PIF next week.

Love your garden and of couse the layout of your next card looks like your pretty well organised with it being cut out and ready to put together, look forward to seeing the finished product :) Sandra x

Your card looks lovely already and I look forward to seeing it finished, and your garden is looking gorgeous too, mine resembles a jungle at the mo!
Tfs, Hugs xx

Your flower pots are gorgeous hunni.I do love the card your in the mmiddle of creating.Have creative week sorry didnt pop by yesterday have to do we bit at atime!
#hugs judex12

If you like a real bargain then check out my blog now :-)
A x

Sweet card, Di and lovely pots of colour. The meercat takes the prize. I just love them so this fellow is entirely acceptable as a garden "not-gnome". ROFL.

Hello Di, love the look of the card in progress - the doiley hearts are lovely. I'm a sucker for meerkats too because I've spent many a happy hours watching Meerkat Manor with my lovely wee granddaughter. Your pots are lovley and colourful and isn't it so that at this time of year we keep dashing out between showers to do a bit of essential gardening. Have a great week. Elizabeth x #53

Love that little meerkat!! Your bits and bobs for the card look lovely - I bet it will be fab!

awesome pictures today. Love the table with the plants and lantern and that Meerkat is stinking cute. I may have to go look around and see if I can find one here. Thanks for sharing. Vickie #46

I love the way you gatther all your bits and pieces together for your card. I do that for scrapbooking but for some reason never thought of doing it for cards!!
Thank you for sharing your garden too. Those pots are looking gorgeous on your table. I need to get my Summer pots done but it's been so flipping cold up here lately. I think we were spoilt too early this year.
Thank you for your lovely comments.
Hugs Lisa #97

Great pics and lovely post. Well done for saving the buttercup, the bees need all the help we can give...
Lv JoZarty x

I think if you enjoy it, gardening has to be the priority when the weather's fine; it's still creative! We work exactly opposite - I colour first and then stress about matching papers and embellies, crazy, huh!

Hi love your card and the seeing it finished on the later post. I too am having blogger issues seems to be any comments that dont open in a pop up box I cannot comment on - been driving me nuts