Teal and silver snippets for Christmas

A reminder that the NEW Snippets Playground now has a post showing the picks and also the prizewinners from the Grand Draw.

And, as my own blog is free for me to play on today, here's a snippets card I made the other day: 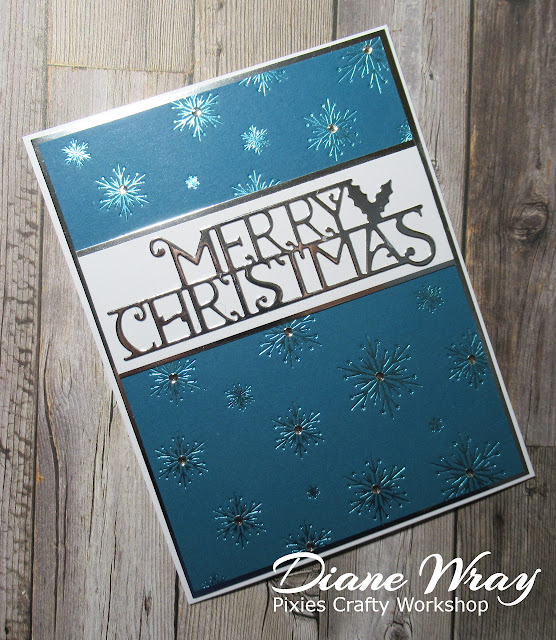 - snippet of silver mirri card, which was lying on the desk - trimmed to just slightly smaller than the card front then glued in place

- then turned to the snippet of card which really started this Christmas card off, found in the front pocket of my expanding snippets folder when I was looking papers to use on Edward's recent Birthday card. It's absolutely gorgeous, a really deep teal colour with foiled shimmery teal 'snowflakes' all over - trimmed to 5.25" x 4" and set aside

- glued the sentiment, using a glue pen, to a strip of white card and backed it with very slightly wider silver mirri card

- only at that point did I add the whole sentiment strip to the teal piece of card using wet glue, allowed it to dry and then trimmed the excess off each side from the back of the piece - that way gives you an accurate guide line for your scissors

I remember very clearly buying that lovely piece of card a lot of years ago in a lovely craft shop in Wiltshire - of course I now wish I'd bought more. Aha, perhaps I did - there's a rarely used box of A4 patterned card stock from those days and (possibly) some whole sheets just might be lurking in there. Need to investigate further. ☺

NB - I've turned comment moderation off on Pixie's to see how it goes. It seem to be working well over at the new Snippets Playground  - fingers crossed!

Off you go now - over to the new Snippets Playground! Dudley is over there, keeping an eye on the slightly 'unlicensed bar' being run by a certain somebody!