As I always say, I love the Rudolph Days Challenge, started by our SaRn and now run (for a few years now!) by Maureen aka ScrappyMo.

Right now any die cutting is limited to using my baby Altenew die cutting machine - and I had just the NBUS die set, waiting for its first outing. This is what I made, which is a very close copy of a card on MFT's website using the same set of dies: 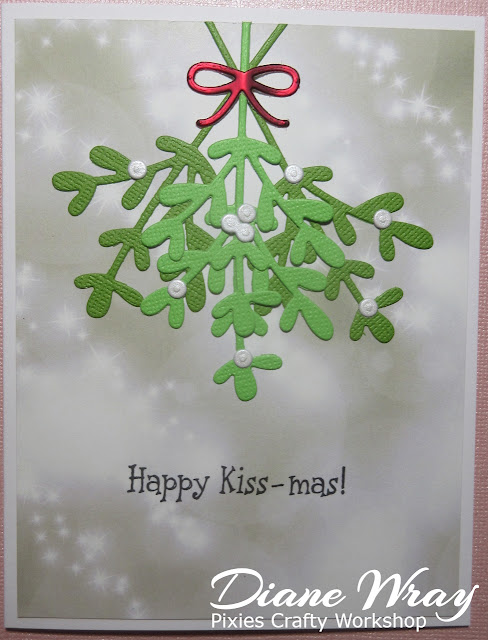 - a sheet of patterned paper from Whimsy's absolutely gorgeous 'Blurry Flurries' paper pack, trimmed to just smaller than the card front and set to one side

- snippets of olive green and lighter green card, which I die cut using the mistletoe branch from MFT's 'Mistletoe Kisses' set of dies - two of each shade of green

- having the branches die cut I could work out just where I wanted to position the sentiment. It's a red rubber stamp by Elzybells (sadly no longer trading) and took a bit of positioning but with the aid of the Misti, a ruler, an aacetate sheet with grid lines printed on (home produced by printing onto printer friendly acetate ages ago) and a test piece of the background paper (to check for any 'ink bleed' it worked really well! I used VersaFine Clair 'Nocturne' ink to stamp with - just be sure not to press too hard as the pad is very juicy

- at that point I glued the four branches onto the patterned panel using a Zig glue pen, the fourth one was placed quite high up directly over the stem of the centre one below - and all the main stems were sticking up at the top of the branches

- then used small scissors to snip the excess from the tops of the main stems, always do this from the back of the panel of paper or card for a true cut

- from the same set of dies I die cut the mistletoe berries and the little red bow, again from snippets of pearlised white card and deep red satin mirri card

- glued them in place using the Zig glue pen again

- final step was to glue the decorated panel to the card front, using Collall All Purpose glue

I knew when I set out that the Whimsy 'Blurry Flurries' paper pack has two of each design - so I made two cards of course! And immediately ordered another paper pack the same from Dies to Die For as I can see it being a favourite for 2021's Christmas cards. I might even make another two exactly the same, who knows? Some really pretty colours in the paper pack and all very gentle designs - just perfect for Christmas cards! As if I really need any more patterned paper, sigh. Perhaps it's time to be a bit ruthless and throw out some of the older ones which do look somewhat dated now.

I'd like to enter this card into ScrappyMo's Rudolph Days Challenge HERE, as well as Darnell's NBUS Challenge #23 HERE.

To maintain fairness, I'm only playing for fun in both challenges as I followed MFT's design so closely. The one thing I did change was that the example I followed used white for the bow and red for the mistletoe berries. I've seen both waxy white and pale pink mistletoe berries here in England - but never red ones. Which apparently do exist - I suppose a bit like a holly bush we once had years ago with creamy white berries! Isn't nature wonderful - always full of surprises.