I loved June's 'Hope and Chances' charity kit on first sight - partly for the design, but also as it's sold for profits to go to Hedgehog Rescue! Sorry folks, it's sold out - but here's my very slightly tweaked version: 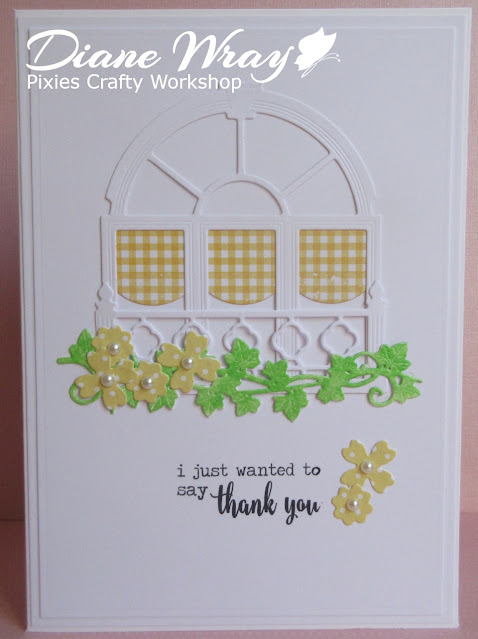 I followed the instructions almost to the letter. Although the 'window box' can be 3-D, I did chop the sides, which made it stand proud, right down - as a given option, to lie flat for posting. Perhaps it should have been left folded and the recipient could have opened it out - duh! My Ziggy green on the ivy die cut might be brighter than Christine's .......... and I also ended up with an additional flower in my kit (waste not, want not). Oh, and I 'Stella Winked' the ivy as well as the flowers. Apart from all that, it's the same - snigger.
Many thanks to all who left comments about the no-line 'fade out' ink. It's clear that I need to be patient, use softer watercolours (which I had sort of concluded) and also concentrate more on shading. Don't hold your breath though - it sometimes takes me a while to get over a disappointment and have another try!

This is darling, Di. You say it's a window box but when I first saw this card I imagined a balcony with a view of a lush vineyard. My favourite detail is the checkered window covering.

What a pretty card Di and great that the profits for this go to Hedgehog Rescue. x

This is such a fresh looking card

Today I am the first to say how much I ike this card!! I like the yellow curtains in the window: great idea!
Stay safe,
Lia xx

Hi Di this is a stunning card. Those kits are lovely. Take care. Hugs Jackie

It's lovely Di - I think this is such a lovely card kit. I added my window box too near to the sentiment on my card, but by the time I realised it was stuck down so had to stay!
Kath x

Such a beautiful card Di.

A lovely design, it looks so clean and love those little blinds x

It's so sweet, Di xoxo

Love it Di, great colours and fab idea with the blinds.

Absolutely adorable card! I just love that little window with the gingham shades and pretty vines and flowers! A real CAS beauty!

It's great that there is a Hedgehog Rescue!! Well done on buying the charity kit for both the reasons!! The card come out very sweet and lovely.
Hugs

I can see why you wanted this kit, Di! What a totally delightful card! I don't think 3D was needed--love it as is!