I just looked back at my post for the challenge which closed on Saturday - so hard to believe what has happened in the space of just two weeks. It's like a war zone in all the shops around here apparently and people are racing round in a 'red mist of stock-piling madness'.

We can only hope that eventually they have no more space to store stuff. To date Morrisons supermarkets have  decided against specified early morning opening hours for those over 70 and NHS and care workers - because their staff are terrified of the rabid shoppers who will undoubtedly try to cheat their way in, still grab more than their allocation and then proceed to fight with the check out operator. Whatever next - this World has gone crazy.

True example that my friend witnessed on Friday - one guy with five huge pizzas was told he could only have three (still too many IMHO). His belligerent reply? 'They're all different flavours'. The mentality is from one extreme to the other - either people are helping where they can - or they're almost shouting from the lifeboats 'Haul the ladder up, I'm all right Jack'.

Here's my snippets card for this fortnight, a nice cheerful one to brighten things up a bit: 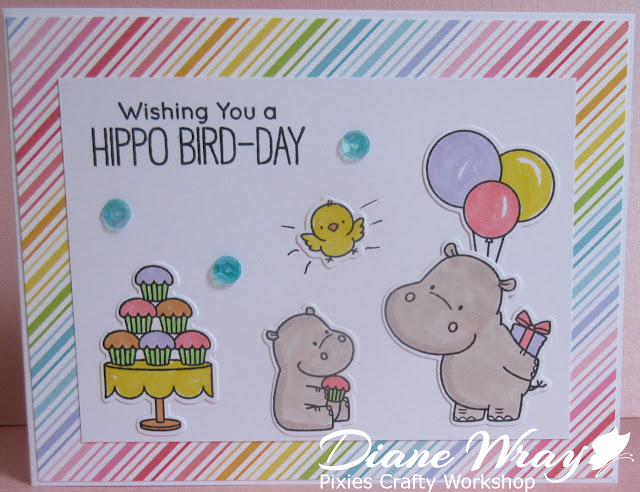 - piece of diagonally striped paper from Lawn Fawn's 'Really Rainbow' paper pack, trimmed to teeny bit smaller all around than the card front and glued on top

- snippets of plain white card and a selection of stamps from MFT's 'Happy Hippos', stamped with Memento 'Tuxedo Black' ink using a Misti

- coloured the images with Pro markers, picking out colours from the striped paper background

- trimmed the white panel to size, leaving half an inch all round which would show the striped border

- worked out where to stamp the sentiment and did just that, using one of the many sentiments from the same set of stamps, the Misti and Memento 'Tuxedo Black' ink

- added the trimmed white card rectangle to the card front, using Collall All Purpose glue as I'd done with the striped background

My snippets this week are all white card (the main panel and also the stamped and die cut images) - but that still counts of course. I've had this stamp and die set for absolutely ages, since November 2017, unused. It's been waiting for a special occasion and on Wednesday (25th March) it will be exactly 10 years since I did my very first post on this blog. What a fun time it's been and I never realised how many wonderful friends I would make on my 10 year journey. Friendships that I treasure so much. In the current climate I don't expect to be venturing anywhere near a Post Office but wanted to still celebrate. When I bought my own 'Happy Hippos' I also bought a duplicate set for the toy box - cost me almost £35 at the time (gulp) and worthy of being a celebrations prize!

And here it is - the prize for this fortnight: 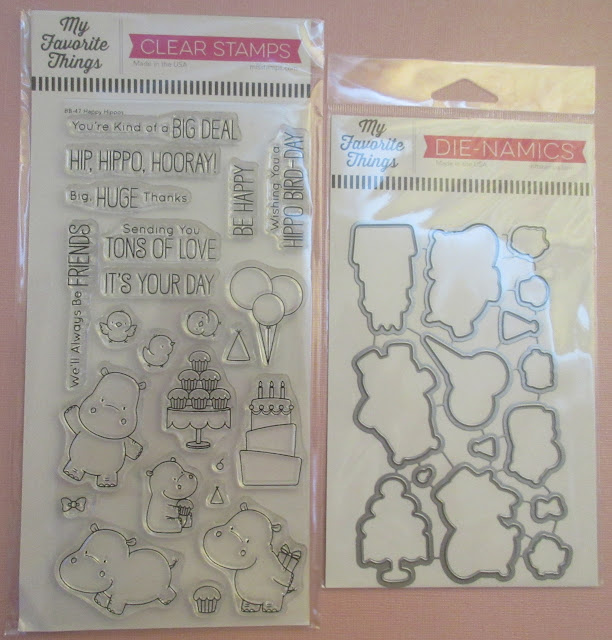 The MFT 'Happy Hippos' stamps and matching dies sets. There are so many stamps and dies to play with in so many ways - it's such a fun set and that's possibly why I've hoarded it for so long! Very likely not easily available now in shops. Given more time I'd have used some DI and a cloud template to make the white background into a pale blue cloudy sky - and perhaps had the big hippo floating aloft on his own with his balloons and just a little bird, with the same sentiment. Tons (no pun intended) of ways to use them!


As always, the Snippets Challenge will run for two weeks and the Playground gates will close at 11am UK time on Saturday 4th April. The gates will open again at midnight UK time on the same day.


No photo of Dudley this time but a slightly amusing tale, now that I know it ended well. Len came back from walking Dudley on Saturday (today as I was typing this) looking quite shaken - my first thought was that perhaps someone hadn't kept their prescribed 'social distance'. But nope - the palms of his hands were scraped - he didn't show me until he'd given them a good scrub and put some healing gel on. Other than that, and the loss of his dignity, everything else seems to be fine.

Apparently, just as he was picking up a Dudley 'calling card' he tripped and the inside out bag he was holding to collect the poop in meant that his hand inside that bag, and the other hand one, slid along the gravel where he (Dudley) had decided to leave his calling card. So, the 'icky still hot off the press poop' spread a bit like icing and poor Len was mortified. Thankfully, Dudley was the only witness and he didn't have his camera with him.

Once I knew Len was OK I then totally cracked up just thinking what a vision it must have been. Then my tears started and it was a full five minutes before I could gasp out what was tickling my 'amuse core' so much. Thank goodness you didn't do a 'face plant' was all I could gasp - before going back to holding my sides and wailing with laughter. Me evil, me very evil! But also very relieved I hasten to add as the outcome could have been a lot worse. The laughter was actually quite well received and Len joined in - because right now we need whatever laughter we can find. Dudley didn't get the joke needless to say :)

Hope you all manage to steer clear of Coronavirus/Covid-19, it's ramping up here in the South of England and we're in one of the country's hot spots in Hampshire.

Do remember that Wednesday 25th (all things being equal) will be the beginning of ScrappyMo's Rudolph Days Challenge for March!

I'm badly behind with commenting at the moment, it's taking hours to find a delivery slot for groceries and even then, you wait for up to two hours in a virtual queue - and can be unexpectedly thrown out. Thank goodness for windows on PCs etc. so you can flip from one to another!  I'll catch up ASAP with comments and just leave you with this rather sad thought, although it did prompt a wry smile from us both: