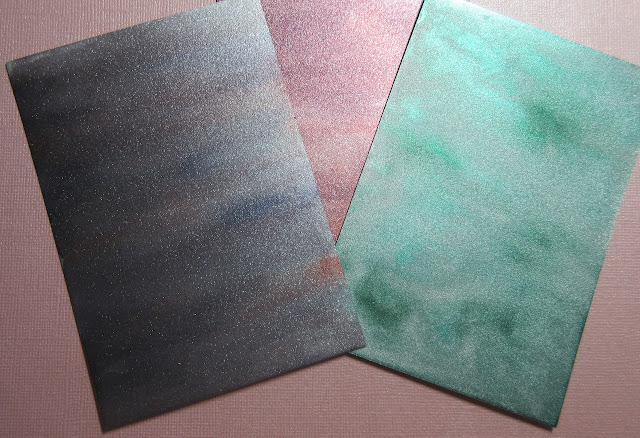 These look lovely Di! Can't wait to see what frame you use with them, Cathy x

Looks like a fun way to spend an afternoon and I too, look forward to seeing how this experiment ends up

I have bought from SSS and there was no added customs duty, I think they include it in the postal charge from themselves. I bought something from another place in America (can't remember who) but that had nearly £20 custom charge to pay I was gutted.

My SSS purchase was probably 18months ago, so can't say if it is still the same, I suppose you could always mail and ask what is their take on posting to the UK.

Looks like a brilliant way to spend a wet day and I look forward to seeing what you do with these pieces. Thanks for the link - off to take a look then I might dig out my alcohol inks (hope they've not evaporated!!)

Ohhh - what wonderful pieces you have there Di - isn't playing with AI's so much fun!
Blessings
Maxine

I can't wait to see your pretty works with those beautiful alcohol inked pieces! :D
I agree with you about that SSS doesn't have an outlet or franchise in Europe... I'm scaring too by the duties!
MemoryBox and PoppyStamps have some lovely frames dies, perhaps you could take a look
Hugs

The pieces are gorgeous and I'm sure the finished cards will be too. One way around the customs issue might be to have a friend in the US order the dies, then send them on to you as a gift. The value threshold for gifts is much higher than for commercial import x

These backgrounds are beautiful Di and love the metallic sheen, and look forward to seeing what you make with them. I was lucky enough to win one of the SSS challenges, probably about three or four years ago so not recently, but didn't have any problem with paying duty. I would have thought that you were extremely unlucky to be picked out when you think of the volume of goods like that coming in the chances of you being picked out for closer inspection are quite low I would have thought. I think I might be tempted to try one more time and if the same thing should occur call that it. x

Alcohol inks are fun to play with. I especially love the turquoise one. I really need a work apron. Mainly because I just purchased Brushos. [Bunny]

So pretty, I’d love to get some of that paper. Will have to search around for it. Sorry you have trouble getting items from SSS. I actually rarely shop from them even though I am in the USA. You guys do have some lovely shops in the UK that I wish were in the US.

It looked like fun when JM was doing this and now you have comfirmed how fun it is. I love how your backgrounds came out Di! So sparkly and shimmery and who doesn't love sparkle and shimmer?! Can't wait to see them made into cards. Would the same thing happen if someone bought a die for you and sent it to you in a card? I don't know much about over seas shipping I'm afraid. It's a shame though that this happens. You'd think there would be an easier way. I don't buy much from SSS even though I'm in the US because they have such high shipping rates. I have bought from Craft Stash in the UK and shipping wasn't bad at all to the US. Comparable to SSS shipping! I hope you can find something close to it. Hugs, Brenda

I am curious what you will make with these!
I know about shipping costs. Once I won a prize: $10,00 to spend in a shop. I had chosen a nice stamp and than came the shippingcosts extra: $ 15,00!!! So you can imagine: I said no to the prize! Such a shame...
Have a great day (did Dudley survive the heat well?)
Lia xx

Lovely backgrounds, I fell in love with alcohol inks as soon as I got them but the sparkle paper is new, looks great. I don't buy anything direct from US for the same reason and have always loved SSS products, such a shame that they don't sell wholesale to third parties. I shall look forward to seeing how you use those backgrounds xx

Oooh these look absolutely gorgeous and I love the schparkle.

Now as for buying from overseas - up to £15 goods value (at HMRC's exchange rate) you're okay but over that you get stung for vat 20% and that's when they start adding postage into the equation and then make you pay extra for actually collecting the money from you.
I also noticed with a lot of American shops that once the goods have been posted then you're on your own if they don't arrive or are damaged on the way. So I tend to avoid buying from overseas.... but then that's me and it's a bit pot luck if customs pull your parcel to check it xx

I love playing with alcohol inks, you never know what the finished piece will look like. Looking forward to seeing what you do with your lovely creations. The sparkle card sounds interesting, I'll have to check it out. I haven't bought anything from the US for ages, but it always used to be pot luck if things got stopped at customs when they arrived in the U.K. I think the £15 limit for no charges has been the same for years, it's about time it was increased...... or perhaps no charge at all for craft related goods. 😉 xx

Oooh these are !ovely Di!
I won a $50 prize from My Favourite Things recently and didn't spend it all because of customs charges. But FedEx just billed me anyway as the postage costs were added in and hey presto I owe them £18!! Hope you don't have the same.
Dudley is looking gorgeous as usual, I always feel the need to get Rubydoo bathed after a visit to your blog ;)

Such beautiful sheets, Di! I got the sparkle paper soon after seeing that video & still haven't opened it! Maybe now I'll get brave!

These backgrounds are truly fabulous! I think I neeeeed the tim holtz sparkle card! Hugs xxxxxxxxx