This is as much for my records as anything as it was so simple to make and (shock, horror) I used a kit! I needed it right at the end of the Grand Draw marathon and was so happy to find I had this kit to hand: 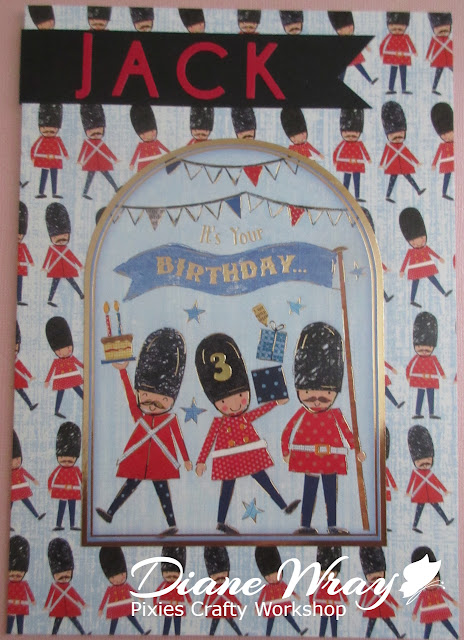 Not much to tell about how I made it - the A5 kit card is (I think) Hunkydory from a Craft event I went to a little while ago. It comes with the design printed back and front plus a nicely co-ordinating insert - and of course the topper with (how lucky) three soldiers on.

Then all I did was to hand cut the banner strip from a snippet of black card and glue it in place. Finally added Jack's name using die cut red letters and popped the number 3 (gold peel off) onto the busby of the middle one of the three soldiers!

Sorry to be a bit slow on commenting on both this latest challenge and also the previous Grand Draw one!

I'm still here, but running around trying to make up for lost time. Took Dudley to the Vet today for more of his prescription monthly worming pills ........... plus a three-monthly flea/tick tablet as he's nearing six months old. He now weighs 5.5kg ☺

I have no problems with the worming tablets - he's been on them for a couple of months now, loves them and they don't cause a reaction either! But am not happy with the flea/tick tablet he has been prescribed. We both feel so uneasy with supposed (possible but devastating) side effects of this particular tablet that we may well not give it to him but look at some less aggressive treatments. Dudley is 'flea free' but we thought it best to prevent rather than have to cure. Anyone here heard of or used 'Bravecto' - that's what he's been prescribed? Come on my doggie friends - help me!!

Love from us all and a woof from Dudley(who looked great for his outing after little Parsnip spent ages bustling around grooming him beforehand - bless my little white bear, who is proving to be a very good 'nanny'),