Last week was Livi's 9th Birthday - where did the years go?

Livi recently started guitar lessons, and apparently loves it. So, in a mad panic I made this card for her in 40 minutes or so - which is a minor miracle for me as I'm a very slow crafter: 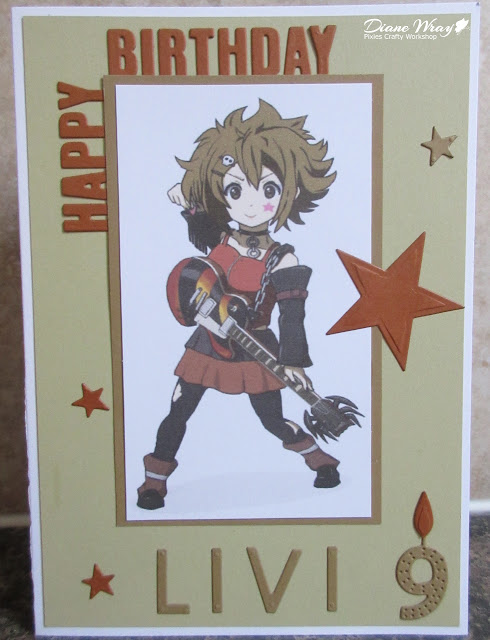 - a snippet of beige card from the snippets folder, with just a small amount trimmed off to make it slightly smaller than the card front, then glued in place

- then I selected the other snippets I wanted to use so I could match the colouring of the image as much as possible - the image is pre-coloured and Len found it for free on the internet (my hero!)

- die cut the sentiment from another snippet of card, this time tan coloured using the Die Versions Corner Concepts 'Happy Birthday' die and added it to the top left corner of the image panel using glue

- next I did the number 9 using The Works '10 Piece Numbered Candles' set of dies to cut out the candle number in mid-brown and also in tan, which I snipped and added on top of the flame

- final touch using some of the leftover snippets, a few stars here and there, die cut using MFT's 'Stars' dies

- the number, letters and stars were all cut from snippets which had been backed with Stick-It adhesive sheet

Livi is not a girl for pretty things, so although the image is a little bit on the 'punk' side I'm sure she will like it over the other options Len found. I used a few similar elements to those I used for Mia's card the other week - they do compare notes :)

Then had to dash to the Post Office with it, along with Lia's prize from the other fortnight.

We were right - Livi's Mum says she adores her card! So relieved.