Dashing in at the last minute to join in with ScrappyMo's Rudolph Days challenge. I LOVE this challenge run by such a sweet lady, and have managed to join in every one this year, even with 'ahem' some distractions!

Here's my card - and I actually made eight of them in one run! Same design etc. so it was just like a little factory production line whilst Dudley was other wise occupied: 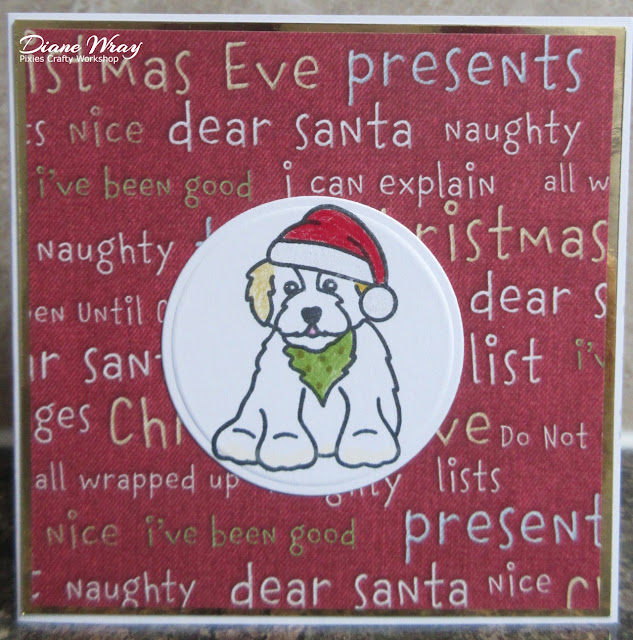 - a slightly smaller square of gold mirri card, glued onto the card front

- a slightly smaller again square of patterned card, from the LOTV 'Twas the Night' paper pad - I got eight squares from two sheets of 8" x 8" paper, love it when there's very little waste!

- the image is a stamp from a little set I recently spotted called 'Santa's Helpers' made by Sunny Studio. The set comes with another dog (sweet little Westie) and three different cats plus a few sweet sentiments - but it was the little puppy that reminded me of Dudley that made me buy it of course,

- added a few gold dots to the neckerchief, using a Signo gold pen

- tickled the fur and pompom with clear Wink of Stella

- glued the image circle in place and called it a day

It felt good to make a little batch of Christmas cards as I'm woefully behind on my target of 12 card per month, although it did take the total up to 101.

And yes, Dudley does have champagne/gold coloured ears - and when he's 'thinking' his little tongue just pokes out like a little piece of pink lint! We don't know if his ears (and his back too) will stay champagne coloured or not - that's one of the delights of a Havanese, their coat can subtly change colour as they grow up, but he will remain mostly creamy white just like his Dad.