To stamp or not to stamp?

I totally love the sentiments in one of Stampin Up's quirky stamp sets - and turned to it recently when making a Birthday card for a lovely blogging buddy. I know that the card has now been opened, so it's safe to post this: 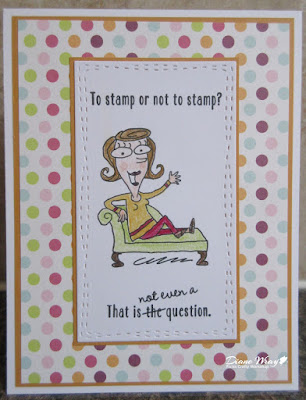 Ha, my in-house critic liked the image but thought the spotted paper was 'too busy'. He really IS very much Less is More :)

There's one thing I would probably do differently in future - it took me several stampings, although the stamps are poly/clear ones plus using the Misti with graph acetate, to get the split sentiment as level as possible. When I'm unsure I always stamp onto spare paper first - too mean to risk wasting decent card stock! Got there in the end, albeit a tad to the right!

Another time, I'll try using an elongated speech bubble die for the first part of the sentiment and then adding it later - which means it's only the lower wording and the image that need to be in line/level. As they say, hindsight is 20/20 vision!