Last week, panic began to set in about achieving my Christmas card making target in time. I may still fall back on a few shop bought cards but whilst rootling through a box of ancient Christmas toppers etc. - I came across some mulberry paper poinsettia flowers in a little packet. They needed to be layered up though, so were put aside as a 'possible'.

And then, rootling a bit further in the same box, I came across some gold 'curled hunting horn' die cuts - literally dating back to many years ago! This was long before I had a die cutting machine, in fact back then I'm not sure if I'd even heard of being able to cut your own dies!

They were sold by Kirsty Wiseman when she owned 'Dies to Die For' before Tracey took over - and at the time I bought quite a variety of ready cut dies from Kirsty (the 'Three Wise Men' silhouettes were fabulous). And so, this card, along with four other ones exactly the same, was born: 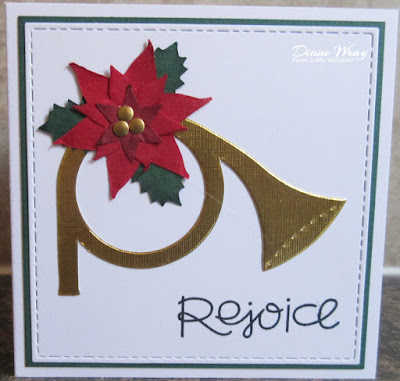 - then die cut a smaller square of white card, using a die from The Works 'Stitched Squares' die set

- assembled the flowers with the green leaves behind using Collall All Purpose glue and the last of a Papermania's 'petal pouch' called 'A Silent Night'. Looking at the small print on the packet. the green leaves are meant to be holly leaves - hey, ho (or should that be 'tally ho? - snigger)

- now I could work out the placement of the sentiment before sticking everything down, using the Misti, Memento 'Tuxedo Black' ink and a stamp from the Paper Smooches 'Christmas Sampler' set

- topped the horn with the flower and leaves

I spent ages looking online to see which way up a hunting horn would be displayed (as opposed to held when giving a good old 'toot'). Looked like it doesn't matter so I went with how I thought suited adding the sentiment and the flower.

I wouldn't know which end was up, Di, so to me your horn looks beautiful this way with the pretty poinsettia and sediment! The holly leaves work great!! Hugs, Darnell

Very pretty card. Isn't it nice to find something in your stash and be able to use it? I wouldn't know which way the horn should be placed either. So, we're going to all say you have it perfectly! [Bunny]

Hi Di, a beautiful Christmas card, love the traditional colours with the gold horn... which way up, which ever way it fits... have a wonderful week... Megan

It's an extremely elegant Christmas card Di and always love a Poinsettia.

A fabulous card and a great way of using some of your 'ancient toppers'!
Kath x

It is great when you come across some really useful items amongst the 'stuff' which we all accumulate and can't bear to throw out. Good that you now have more Christmas cards made.

Five more cards for the box Di, you're doing really well, and this design is so pretty with the bright red of the poinsettìa and the golden horn, and I love the design of the sentiment too. x

A lucky find! It's cool when you can use old stuff to make a card - especially a gorgeous one like this! The holly leaves look cool - who would know? Perfect sentiment too. Hugs xxxxxxx

Great design Di - whichever way up the horn should be!!!

It seems panic is a frequent companion of many crafters at this days. But until hollidays everything will become in order. Your card is awesome.

Beautiful card, and even these 5 beat me. I've STILL not started! Eeeek!
Hugs,
Em xoxo

Your card it's so elegant and really festive!

So pretty Di and creative is your card x

What? You are panicking? I've 5 done! Congrats on setting goals and accomplishing them.

Brilliant card, great dies and sentiment.
I am on to next years cards now, is that sad or what?

What a wonderful find Di, they make gorgeous cards.

Hi Di,
oh this card is gorgeous.
I love your wonderful design and your always pay so much attention to your details on your cards.
Lots of crafty love. Jenny L.

Great design and brilliant to use up some old stash x

Wonderful use of found treasures. Reminds me of when I first started to buy die cuts from Ebay before I even considered one of those expensive machines. (I now have 3)
Carol
xx

Whichever way up it should be, your card looks great!