I've had a pair of NBUS 'beach hut' dies for quite a while, waiting for a first outing. We had an overcast day last week so I set to and made this card - in the hopes of enticing the sunshine back: 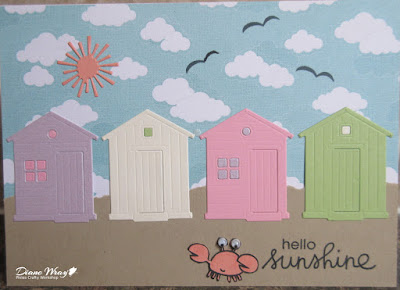 - snippet of 'sky' paper from LOTV's 'Up, Up and Away' paper pad to cover the top two thirds of the card

- snippet of Neenah 'Desert Storm' card, roughly torn along the top for the sand

- glued the sky paper and the sand card in place using a tape runner, butted up to the left hand side and also the top and bottom where appropriate

- only then did I trim the right hand side down by an inch - that ensured a perfect 'edge to edge' fit of the background :)

- before going any further, I added the sentiment using Memento 'Tuxedo Black' ink and a stamp from the really sweet Paper Smooches 'Summer Lovin' set - of course used the Misti as well!

- then added the sun, die cut from peach card using the sun from the Joy! Sun & Moon set

- rubbed out the pencil lines on the 'sand'

- he agreed with me that the flip flops didn't look quite right - a bit like Shrek was in town! 'Shame you don't have a crab' he said - result!

- in the very same Paper Smooches stamp set there's the cutest crab, so I stamped him onto a little leftover already Stick-It backed snippet of peach card, added a little bit of shading with a darker Polychromos pencil and fussy cut him out before sticking him to the side of the sentiment

- final touch for more fun, I added a couple of little googly eyes to 'Clarence the Crab'

I noticed after cropping and linking the image that the green hut needed pressing down a bit more, but didn't bother retaking the photo as it's a bit of a palaver. Should have run it through the Cuttlebug before adding the eyes to Clarence, but it's well pressed down now!

If you're tempted by the beach hut dies, do be aware that they're approx. 2" tall and over 1.5" wide at the widest point. That does mean they're big enough to add your own colouring of course, which adds to the versatility.

And guess what, just as I was clearing stuff away from my desk - out came the sun!