Running in at the last minute with my entry for this month's Rudolph Days challenge over at ScrappyMo's. February being such a short month always catches me out in so many ways - not least some serious slippage on my planned target of making 12 Christmas cards per month!

Anyhow, I had a NBUS stamp to play with and also made four cards the same while I was at it: 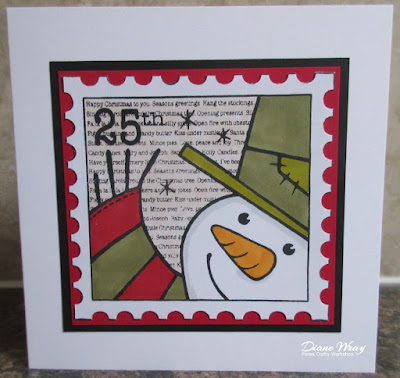 - piece of white card onto which I stamped Woodware's 'Snow Post' stamp using Memento 'Tuxedo Black' ink and the Misti - as already said, I made a batch of four in one go

- then I faced cutting round all those curves to retain the 'edge of a postage stamp' look.......aak! After some thought I trimmed straight down all sides using scissors. The stamp's outer edge isn't totally 'in line', that's part of the design though, so using a trimmer was out and it had to be scissors

- and here's the sneaky part, I cut each of those half moons out using a normal office single hole punch! It still took a while but nowhere near as long as fussy cutting would have taken :)

I think the stamped image itself does most of the work really, so refrained from adding a sentiment or anything else - plus the background to the stamp has lots of Christmassy greetings in small print as it is.

Still a bit behind with Christmas card target though but some serious 'batch baking' in March should help!