I found some blank white cards and envelopes in a box the other day - just diddy little things but it struck me that I could make a few little gift cards to enclose with Playground prizes: 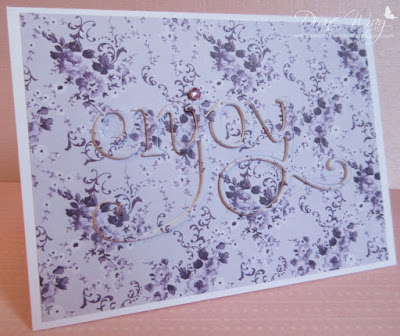 - patterned paper from Papermania's Capsule Collection 'Heather' paper pack. Using the 'enjoy' word die from Penny Black's 'Hooray' die set I then cut the word out of the centre of the patterned paper and also die cut a further two words the same from plain white card

- to make assembly easier, I'd already backed the paper and white card with some 'Stick-It' adhesive sheet prior to die cutting, so it was just a case of popping the background onto the card front and then layering up the white card die cut word into the aperture twice before topping with the patterned paper layer

- for the dot above the letter 'j', I used a lilac gem (truth be told, I lost one of the patterned dots and decided that gems might be better anyhow)

I made two of these at the same time whilst everything was strewn out on the desk :) And they aren't very easy to photograph - for all I know you might think you're looking at a card with just a flat piece of patterned paper on, but just rub your finger across the screen and you'll feel that the word really is raised. Don't tell me that you really DID rub your finger across the screen?