Sometimes a particular card turns out to be extra fun to make and this was one: 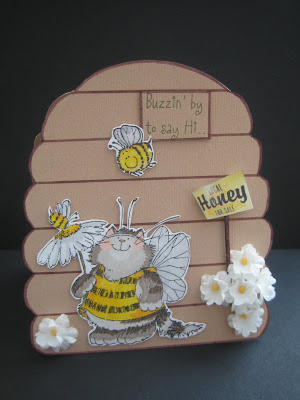 The beehive was made using an image downloaded from the internet, resized and then cut out and used as a template twice onto beige coloured card. Bit of careful cutting out there! I then outlined the front and drew the horizontal lines in using a brown Whispers pen. The card is tent style with the front attached to the back at the very top of the hive.

The stamps are among my favourites, they're Penny Black, the large one is called 'Bee Costume' and the small bee is also a Penny Black one called 'honey'. They both sit on my small shelves above my desk and never fail to make me smile.

Pro markers were used to colour in the stamped images, the sentiment is an Elzybells one (just perfick for this card!). The little white flowers came from my stash but something was still lacking. Bit of pondering and some poking round the internet where I found a website with signs for 'Honey for Sale'. Copied one image into Word, resized, printed onto card, cut out and then with the addition of a cut-down and brown coloured (Whispers pen again) cocktail stick I had a little sign for the puddy tat salesman! I can't stop smiling at the thought of him there in his bee costume, ever hopeful of a bumper load of honey to sell :)) He even has little antennae (or are they feelers?) on a headband for goodness sakes.

Daring Cardmakers - The Darling Bugs of May

Thanks for calling by - no real honey here for sale though :(